Since first elected in 2006, his Conservative government has been pointing in that direction. Tiny gestures to be sure. But, taken together, they trouble many Canadians.

The most recent signal came last Monday, when Neil Macdonald, the Canadian Broadcasting Corporation’s senior Washington correspondent, reported on an email exchange he had had with a government spokesperson.

Macdonald had sought clarification on Public Safety Minister Steven Blaney’s statement last January at the United Nations General Assembly Session on Anti-Semitism where he said: “Canada has taken a zero-tolerance approach to anti-Semitism and all forms of discrimination including in rhetoric towards Israel, and attempts to delegitimise Israel such as the Boycott, Divestment and Sanctions movement.”

Macdonald wanted to know what exactly Blaney meant by “zero tolerance” and how he, the minister responsible for law enforcement, intelligence and security, would enforce it.

The reporter also inquired how a memorandum of understanding (MOU), signed by Canada and Israel in January, fit into the legal picture. As the MOU proclaims, the signatories are “[d]eeply concerned by … calls for a boycott of the State of Israel, for the divestment of investments, and for sanctions to be imposed on Israel”.

Not only did the spokesperson not flesh out Blaney’s anti-BDS statements, she referred the matter to Foreign Affairs, Trade and Development Canada. Macdonald objected, writing that Blaney had made the statement and therefore it was more appropriate to hear from him. She then countered with citations from the Criminal Code of Canada, including a hate crime clause amended in late 2014 – almost unnoticed in a 70-page bill ostensibly about cyber bullying – to include “national origin” along with sexual orientation, ethnic origin and religion.

The email exchange, later published unedited, clearly indicated, at best, an act of deliberate obfuscation on the part of Blaney’s department, or, at worst, a trial balloon from the Harper government.

When the CBC story went online, the government came out swinging. Two more spokespersons jumped into the fray, wrongly asserting, “This story is inaccurate and ridiculous. These laws have been on the books for many years and have not changed.”

Although Canadians went on social media to attack the government for citing hate laws in connection with criticism of Israel, the story went unmentioned in the House of Commons. That’s because Israel is the third rail of Canadian politics. Parliamentarians who dare speak out are guaranteed to face charges of anti-Semitism, especially by Harper’s Conservatives.

Indeed, in February, the House of Commons held an extraordinary three and a half hour late night debate, supported by the Centre for Israel and Jewish Affairs, focusing on “the troubling rise in anti-Semitism around the world”. It concluded with a unanimous resolution of condemnation.

Harper is the prime minister who, in defiance of Canada’s long-held reputation as an “honest broker” in the Middle East, has demonstrated one-sided support of Israel since he came to power.

In 2006, when Israeli bombs killed a Canadian UN peacekeeper in Lebanon, Canada was silent. The Harper government has also undermined or pulled financial support of NGOs such as Kairos and Rights and Democracy, which advocated for Palestinian rights. It also withdrew its funding from UNRWA which is committed to Palestinian refugees.

In 2009, it endorsed the Canadian Parliamentary Coalition to Combat Anti-Semitism at which most presenters conflated anti-Semitism with criticism of what’s increasingly called “the Jewish State”.

In January 2014, Harper toured Israel with a remarkable entourage of 200 that included Conservative cabinet ministers and MPs, pro-Israel lobbyists, a dozen evangelical Christian clergymen and 21 rabbis. Many travelled at taxpayers’ expense. But they were all there for partisan purposes, as a backdrop to Harper’s pandering to his political base back home.

Calling Harper “a great friend of Israel and the Jewish people”, Netanyahu praised him for “unabashedly” standing by Israel on issues including Iran’s nuclear programme, and terrorism.

In his speech to the Knesset, the first ever by a Canadian prime minister, Harper received standing ovations for referring to “the new anti-Semitism” and declaring, “through fire and water, Canada will stand with you”.

But it was his comments on BDS that captured the attention of free speech advocates here: “As once Jewish businesses were boycotted, some civil-society leaders today call for a boycott of Israel.”

No wonder groups such as British Columbia Civil Liberties Association (BCCLA), Independent Jewish Voices, the United Church of Canada and the Quakers have expressed concern over the government’s increasing tilt towards redefining anti-Semitism to include criticism of Israel.

Micheal Vonn, a lawyer and policy director for BCCLA, told Al Jazeera English: “Critics of the policies of the state of Israel in Canada have felt the chill of this discussion for a long time.”

It’s possible that the Conservatives will never actually pass laws to make criticism of Israel illegal. But then they don’t really have to. All they need do is put up the signposts – and Canadians will take care to avoid the political quicksand. 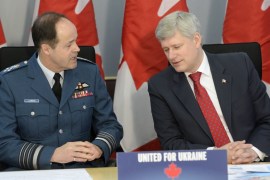 Canadian troop deployment in Ukraine is to secure votes for Harper’s Conservatives in next election. 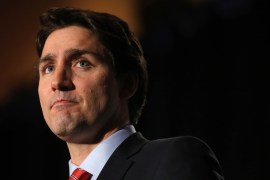