Mahfouz Saber was certainly no minister of social justice. The now-former Egyptian justice minister said during a television debate that the judiciary was not a suitable career option for the offspring of rubbish collectors and other modest occupations because “a judge must hail from an appropriate environment”.

His remarks, which effectively marked millions of Egyptians as human refuse relegated to the dustbin of society, unleashed a wave of popular outrage across Egypt.

“When the concept of justice is absent from the nation, nothing remains,” tweeted Egyptian Nobel laureate and former figurehead of the anti-Mubarak opposition Mohamed ElBaradei, who is himself a legal scholar.

Part of the outcry was due to the symbolic importance of Saber’s job, even if the judiciary does discriminate against women too.

As justice minister, he must have been aware that his remarks conflicted with the guarantees of equal opportunities and the prohibition of discrimination based on class, religion, race or gender enshrined in Egypt’s constitution, not to mention the many international human rights treaties to which Egypt is a party.

In addition, for the millions of Egyptians who took to the streets during the revolution to demand “bread, freedom and social justice”, this was yet another rude slap in the face reflecting how little Egypt had changed in the meantime.

The blogger Mina Fayek saw the incident as “yet [more] proof that justice in Egypt is just a farce”. With Egypt’s increasingly politicised judges meting out once-unimaginably draconian rulings, including mass death sentences, it is hard to believe today that the judiciary was until very recently seen as one of the few (relatively) independent institutions and an important check on the executive’s excessive powers.

As calls for Saber’s resignation multiplied, the justice minister was persuaded to fall on his sword, with Prime Minister Ibrahim Mahlab saying that the disgraced minister was leaving out of “respect for public opinion”.

Though this is a hugely important symbolic victory for the cause of equal opportunity in Egypt, Saber’s attitude is simply the tip of Egypt’s snobbery and nepotism iceberg. The opinion Saber voiced was more politically incorrect than factually incorrect – and not just in the judiciary. People applying for prestige posts, such as the diplomatic corps, are routinely vetted socially.

In fact, a number of activists recalled the tragic case of Abdul Hamid Shata who, even though he came first in the entry exam for the diplomatic corps and had proven himself repeatedly at university, was passed over because he was deemed “unsuitable socially“. After years of material sacrifice on the part of his impoverished parents and endless hard work on his part, the shock proved too much for Shata and he took his own life.

Some believe that nepotism also played a role. Whether or not it did in Shata’s case, it certainly is rampant in Egypt, where the sons and daughters of the wealthy, well-positioned and powerful mysteriously always seem to land on their feet, even if it crushes other people’s toes.

That is why Egyptians have so many colloquial synonyms for nepotism and cronyism, including the famous Arab-wide expression “wasta” (clout) and “mahsoubiya”, as well as the baffling “kosa” (courgette). Claims voiced by a leading judge have emerged that Saber himself got into the judiciary thanks to his father’s wealth and the good word of his uncle, a prominent judge.

This social reality is a far cry from the ideals espoused by two revolutions, in 1952 and 2011. The Free Officers were successful in abolishing the old feudal order and the monarchy, and their socialist-inspired coup brought about universal education, land reform and introduced the principle of egalitarianism.

However, it quickly became apparent that the old landed gentry were simply replaced by a new elite made up of army officers, who talked the talk of equality but walked a very different walk. With the neoliberal reforms first introduced by Anwar al-Sadat and completed by Hosni Mubarak, the military top brass allowed a new business elite to join it at the high table, bringing Egypt full circle.

Throughout, and despite the lip service paid to equality, classism has survived in Egypt at most strata of society. This is reflected in how the old titles, such as Pasha and Bey, though robbed of any official weight, continue to be used with gay abandon by Egyptians wishing to express deference to people they see as their social betters.

It also lives on in such insulting descriptions as referring to someone as being “ibn/bent nas” (son of people), as if implying that others are the offspring of animals, or the lengths to which many Egyptian families go to ensure that their children marry someone of their class.

That said, there is social mobility in Egypt, as reflected in the (relatively) modest backgrounds of every single Egyptian leader since 1952, and the opportunities afforded many by universal education when it was still of a decent level.

However, many who do make it up the ladder, too often kick it away and many even downplay their own roots, as reflected, for example, in how almost anyone with an education or career, regardless of where they came from, adopts the Cairene accent of the well-to-do.

For a beautiful, fleeting moment in the Republic of Tahrir these class divisions were ignored and there was a conscious effort to erase them. Let’s hope the justice minister’s departure is a sign that Egyptians are rediscovering their appetite for social justice. 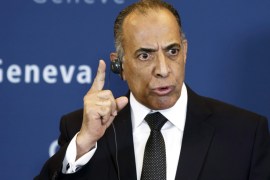 Mahfouz Saber resigns amid uproar over remarks that children of rubbish collectors workers too lowly to become judges. 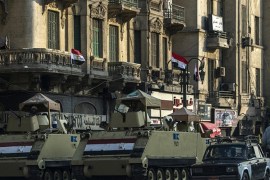 The changing face of Tahrir Square