Last week we were treated to another glimpse into the life and thoughts of Syria’s President Bashar al-Assad as part of a “60 Minutes” interview with Charlie Rose. With the world, and Damascus, united in the fight against ISIL and the US admitting last month that they will have to negotiate with Assad, the president has granted more media interviews as proof of his new-found confidence in his long term future.

Despite the fall of Idlib, only the second provincial capital to fall into opposition hands, Assad remains convinced that he is the answer to – rather than the cause of – Syria’s problems.

As with analysis of any authoritarian regime there is a disproportionate focus on the dictator at the helm. James Dawes’ recent powerful work “Evil Men” highlighted how those who had committed heinous acts throughout history fell back on “pre-packaged language as a safeguard against thought”.

The Rose interview is yet another example of the futility in trying to hold Assad to account through media scrutiny and there are real questions as to whether major broadcasters should value the newsworthiness of any interviews they manage to secure.

In the Rose interview, Assad quickly pivoted onto comfortable ground in criticising US policy in the Middle East, highlighting Israel’s continued occupation of Syrian land and stressing his government’s crucial role as a bulwark against “terror”.

Assad denied any responsibility for the 220,000 dead or the millions forced from their homes explaining that all his actions stem from a legitimate defence of the state in the face of meddling by “external actors”. A parallel of such self-absolution can be found in Hannah Arendt’s description of the Nazi war criminal Adolf Eichmann which focused on his inability “to think from a standpoint of somebody else”.

Rose’s key tactic appeared to be trying to tie Assad down on the issue of WMD use. He didn’t start well:

Rose: “Do you approve the use of chemical weapons?”

Syria’s president then went on to refuse either to confirm or deny Syria’s stocks or the use of chemical weapons (according to Assad there is no “evidence” of this) nor the presence of Iranian or Hezbollah fighters within the country’s borders. As far as Assad is concerned, he is the state and protecting the state is the end that justifies any means.

If you are taking zero responsibility for the conflict and your actions are in your eyes 'legal' and 'legitimate' while your enemies are quite the opposite, you can perhaps understand how you can surrender to the defactualisation of the events around you when sheltered in a Damascene green zone bubble.

In a February interview, the BBC’s Jeremy Bowen tried to make progress on the devastating use of barrel bombs, the iconic weapon in the conflict.

Assad deflected to the point of incredulity, claiming “there are no indiscriminate weapons … we have bombs, missiles and bullets … I haven’t heard of [the] army using barrels, or maybe cooking pots”.

The journalists put up in front of Assad have not put forward softball questions (although the Washington Times described the Rose interview as a “abuse of journalism” for its lack of robustness).

Rather, they have come up against a style of response that makes no pretence at reality based answers, which begs the danger that all the various “exclusives” achieve is giving Assad a platform to seem reasonable and familiar in contrast to the horrors coming out of ISIL-controlled territory.

People may ask the very human question as to whether Assad can sleep at night. But if you are taking zero responsibility for the conflict, and your actions are in your eyes “legal” and “legitimate” while your enemies are quite the opposite, you can perhaps understand how you can surrender to the defactualisation of the events around you when sheltered in a Damascene green zone bubble.

Even more so, you can happily lecture isolated foreign visitors (Rose wasn’t allowed his own technicians and film crew) on the mistakes in their understanding of reality from outside Syria as not being true, compared to what he perceives it to be inside.

Assad also appears to revel in the thrill of defensive solidarity and the “I told you so” narrative concerning the choice between him or the extremists of ISIL and the like.

The Idlib loss and the huge uncertainties surrounding the staying power of ISIL and the impact of further western support to supposedly “moderate” opposition means that in reality what is left of the Assad regime’s power base is far from safety.

This uncertainty is of course absent from the various conversations Assad has had with international media and questions remain as to how much of a scoop spending an hour with him is. Far more interesting perhaps would be to send in a trained psychologist to try and make more substantive progress. 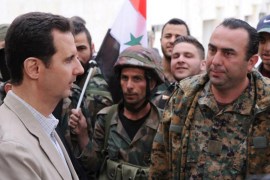 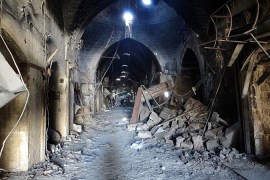