These days you cannot walk around the Maidan Nezalezhnost, the location of the Euromaidan protests last year in central Kiev, without being asked for a donation.

Charitable organisations like “Self-Defence of the Maidan” or “Army SOS” have their volunteers asking for money to provide basic supplies for the so-called Territorial Defence Battalions – better known as volunteer battalions – fighting the Russian-backed separatists in eastern Ukraine.

As fighting started to pick up last summer in the Donbas, it was clear that the regular Ukrainian Armed Forces could not mobilise fast enough to deal with the threat. Even worse, the soldiers that were sent to the east often lacked the most basic military equipment.

This was not because the Ukrainian military lacks supplies to provide for its troops. It is because corruption is a serious problem in the armed forces in the same way it is across most sectors of society.

In some cases a simple matter of providing boots to soldiers requires bribes from the upper echelons of the military to the supply sergeant, meaning that some soldiers go to the front in tennis shoes.

Today, there is an estimated 10,000 volunteers serving in around 50 volunteer battalions. Some of the more well-known groups – such as the Donbas Battalion or the Donbas Battalion – are actively engaged in fighting and have carried a heavy burden for the nation’s defence. Other volunteer battalions operate well away from the fighting and train to provide territorial defence in the event of a larger Russian invasion.

While small donations received at the Maidan provide basic supplies such as socks, T-shirts, and toiletries to the volunteer battalions, the vast majority of them are funded primarily by Ukraine’s oligarchs. Therefore, it is no surprise that the volunteer battalions often have better equipment and weapons than the regular army.

This has fostered a culture of loyalty between the volunteer battalions and the oligarchs that in some cases supersedes loyalty to the state. This reliance on oligarchic funding for the volunteer battalions is bad for democracy and bad for Ukraine’s future. This is especially true for a country that is so mired in political and economic corruption.

There have even been cases of oligarchs using their volunteer battalions to secure their private business interests.

Last month, the Ukrainian oligarch and governor of Dnipropetrovsk Oblast, and the world’s 377th wealthiest person, Ihor Kolomoisky, sent his armed men to occupy the headquarters of the state-run oil company UkrTransNafta in Kiev, after its director (a protege of Kolomoisky), was fired.

In a rare act of exercising authority, President Petro Poroshenko sacked Kolomoisky from his governorship of Dnipropetrovsk Oblast in response.

Corruption and economic mismanagement is a major threat to Ukraine’s long term survival. Slowly, Ukrainians are getting tired of it all. The change many were hoping for after Viktor Yanukovich was ousted has not been realised.

This time, instead of young students throwing rocks and Molotov cocktails there is a concern that a third Maidan would see the volunteer battalions (armed to the teeth) playing a leading role. The implications of this are obvious.

Until the cycle of corruption that orbits the upper echelons of the political elite and oligarchs is broken, Ukraine’s future is bleak. Even though there is legislation in parliament to crack down on the political control enjoyed by oligarchs there is little appetite to pass it. The decision to sack Kolomoisky might be the start of a change in attitude towards oligarchs and their volunteer battalions, but it is too early to tell.

Make no mistake; the volunteer battalions have sacrificed greatly to defend their homeland from the Russian-backed separatists. They are generally tolerated by the public (for now), because they have played such a big role in defending the homeland.

It is also easy to understand what motivates a young man to join one of these units. However, the volunteer battalions are only a short term solution to a long-term problem.

Until they are brought under the full control of the central government they pose a clear threat to legitimate state security services and Ukraine’s democratic transformation. 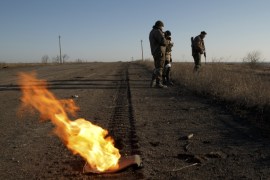 Time to acknowledge that the Ukraine ceasefire is dead

Ceasefire was destined to fail because there is so little trust between the warring parties.