To the everyday passerby, the outward changes in Tahrir Square may be too gradual to notice. Despite its role in the physical and social formation of a city, its infrastructure often carries a quality of invisibility, unseen barring some momentary disruption in its existence.

At the symbolic centre of the Arab uprisings, where the relationship between physical space and politics is acute, recent infrastructural changes reflect shifting power dynamics.

On the eve of the 2011 uprisings, Tahrir Square stood as a hodgepodge of sites. The American University of Cairo, a converted Ottoman palace, had recently moved classes to a new desert complex. The Mogamma administrative governmental building was buzzing with people attending to bureaucratic needs. The Arab League headquarters stood out as a monument to past policy dreams.

The National Museum greeted tourists with its extensive stock of Pharaonic artefacts. A statue and mosque in the name of Omar Makram, who resisted Napoleon’s 18th century invasion of Egypt, led onto Qasr al-Nil bridge, flanked by stone lions, the work of 19th century French artistry. Street vendors overtook the sidewalks and poured into the streets, where people emerged from the metro or descended from buses.

These streets and sites took on new meanings as diverse actors occupied them in 2011, and beyond. Qasr al-Nil bridge became a point of confrontation, where a front line of protesters, guarding the square, waged hours-long battles against the water cannons and tear gas of state forces.

The headquarters of Hosni Mubarak’s National Democratic Party was lit ablaze. The National Museum became a site of torture. The entrance to the Arab League became an extension of the Syrian uprising, where refugees pitched an elaborate protest tent. The American University of Cairo looked on to the bloodiest street battles of the uprising, and later its exterior walls became the backdrop for elaborate graffiti that galvanised further action.

Modes of transportation became a strategic tool for manoeuvring crowds. The Mogamma stood as testament to the crowds’ ability to shut down state operations. The concrete pavement blocks were torn apart by protesters, the pieces launched at state forces that encroached upon their claimed space. The street vendors, often themselves participants in the movement, became important providers of sustenance, and of Egypt-themed paraphernalia.

Today, the state is the dominant actor in the Square. Perhaps the first noticeable change is emptiness: the significantly lower traffic, automobile and people, that occupies or crosses through the space. The cause is apparent: Strictly enforced regulations prevent street vendors from crowding the newly minted sidewalks, and an underground mega-garage has unclogged downtown movement. The traffic police, a presence largely unseen since the Mubarak era, enforce movement regulations.

In the centre of the square, a vandalised state monument to killed protesters has been removed, and replaced by a towering flagpole, with a simple concrete base etched with detached and meaningless Pharaonic and Arabic letters.

The Nile Ritz, for years “under construction”, has been unveiled to reveal a facade with multicoloured Pharaonic letters and imagery. The National Democratic Party headquarters, left blackened with smoke since it was lit afire in 2011, is now covered with a vast banner that reads: Investment is the key to prosperity in Egypt. The image on the banner is a stream of water in the midst of desert, presumably a reference to the new Suez project, shaped in the Pharaonic symbol for the “key of life”.

These visuals are part of a wider government discourse that seeks to end the “instability” of the past and enter a new era of “progress”. The government presents itself as technocratic, as focused on the collective goals of stability, economic growth and prosperity. These projects – the painting, the sidewalks, the mega-garage and clearing of traffic – echo historical modernisation efforts through which the state presents itself as an “organising” force.

References to a Pharaonic past have, since the colonial era, been drawn upon in political discourse as an indication of objective, undisputable achievement.

The thousands of years that separate contemporary Egypt from the Pharaohs makes this discourse well suited for claims of political detachment and neutrality.

Power configures space to materially manipulate movement, and to aesthetically and visually assert itself. Although the uprising goes far beyond its spatial dimension, streets are ultimately the physical site of confrontation and an important means of visualising power dynamics.

The state’s encroachment upon Tahrir Square seems to herald a new era in Egyptian street politics. But infrastructure should never be considered in isolation; to some, these visuals are only an ephemeral facade. As I stopped to ponder on the changes in Tahrir, a cafe vendor stopped to reflect with me.

“I saw blood spill on these streets,” he said. “The new pavement cannot erase that.”

Sarah Mousa graduated from Princeton University’s Woodrow Wilson School of Public and International Affairs in 2010, and was a 2010-2011 Fulbright Scholar in Egypt. She is currently a graduate student at the Center of Contemporary Arab Studies at Georgetown University. 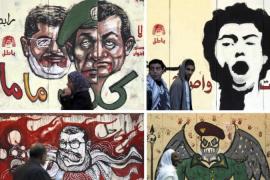 In Egypt, murals aren’t a form of art – they are an act of protest. 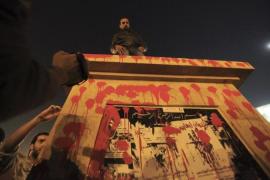 The revolutionary voices of people fall on deaf ears as Egyptian military rulers continue with business as usual.