If it were ever in doubt, the protests in Baltimore have shown us once again that only some types of violence are visible, or really matter. As demonstrations in this US city surged following the death in police custody of 25-year-old Freddie Gray, the terrible violence of that death – on top of so many more, at the hands of US police – was sidelined out of the story.

Gray was arrested when he fled after “catching the eye” of a police officer and his neck was broken while in police custody, but it was the smashed glass storefronts on Baltimore’s streets that became the focus of concern.

The US media went into overdrive with its depiction of “chaos, violence and lawlessness” as MSNBC put it. Collective establishment heads were shaken at the looting.

The clear racist overtones in the coverage of “black rioters“, as news website Breitbart.com headlined it or of “thugs” on a rampage, as so many more news organisations depicted it, was routinely denied, while widespread haranguing using the trump card of “protest violence” took hold.

“You are suggesting broken windows are worse than broken spines,” came the response to this attempt to redefine the significant details of the story, in a city that has already paid out nearly $6m to alleged victims of police brutality, including a grandmother and a pregnant woman.

And so here it is again: The stealthy tyranny of the “non-violent” proviso demanded of popular protests. Events in Baltimore are symptomatic of and particular to the US and its bloody history of state and social violence, in all its forms, against black Americans from slavery to the streets today. But the unrepresentative and wholly marginal violence of broken windows is invariably invoked against all protests that are struggles against power and its abuses.

From the streets of England during its riots of 2011, or back to the anti-capitalists protests against the WTO in Seattle in 1999; the IMF in Prague and the G8 summit in Genoa; from the protests engulfing marginalised French suburbs, to Ferguson in the US, right across to the Palestinian struggle to be free from occupation – all these movements against inequality and injustice are bound by the media depiction of protest as suddenly, senselessly “violent”.

Such loaded appraisals are wilfully blind to the fact that situations never go from total calm to sudden violence. There is a daily, pervasive state violence that is never spoken of, much less acknowledged: for Palestinians living under a brutal military occupation; for marginalised, disenfranchised young people in British cities or French suburbs; for African Americans disproportionately impoverished, disadvantaged and preyed upon by US police, surviving generation upon generation of institutionalised and violent racism; for the global South diminished and drained by neo-liberal policies imposed upon it by the IMF and the WTO.

The violence never starts with protesters on the streets – it’s just that this is the moment the cameras decide to start filming. In this context, it takes a special kind of struggle-free, reality-blind sanctimony for media commentators to start preaching about the need for non-violence.

Moreover, the disproportionate focus on the violence of broken windows and looted shops ignores the full panorama of these issues: the lengthy, ongoing debates within protest movements over the merits and drawbacks of violence (against property, not people) as a tactic; the attempts within communities to prevent and guard against violence, or dissipate tensions, or take action to clear up in the aftermath; the pressure-cooker conditions created by ramped up, over-militarised, heavy-handed and often provocative policing; the simple fact that movements unite over causes if not always tactics; or just that understanding why a few people might steal trainers during protests is not at all the same as justifying such behaviour.

Instead, the “non-violence” theme is rolled out precisely to prevent any such debate over causes, context or history. This media preoccupation is in place to ensure that we stop talk about anything else.

We know the Martin Luther King quote: “A riot is the language of the unheard.” The question is why, after so long, are these voices still not listened to? And who is it that doesn’t want us to hear them? 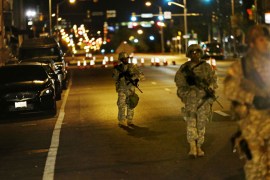 Tear gas and pepper spray used as police try to quell riots sparked by the death of a black man in custody. 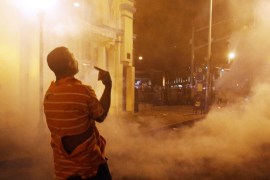