On March 12, 1947, US President Harry Truman spoke to the US Congress, and delivered what became known as the “Truman Doctrine”.

The speech was in response to the spread of Communism and the Soviet takeover of many of the countries of Eastern Europe. Despite the passage of more than half a century, many of the principles remain true today, and certain passages of that speech have particular resonance when looking at many of the issues facing some states today.

In particular one is reminded of the passage where comparison is drawn between autocracy and democracy, and having examined democracy, Truman went on to say: “The second way of life is based upon the will of a minority forcibly imposed upon the majority. It relies upon terror and oppression, a controlled press and radio; fixed election, and the suppression of personal freedoms.”

Truman then went on to acknowledge “the free peoples of the world look to us for support in maintaining their freedoms”.

In essence, Truman talked about the obligation of free and democratic states, specifically the US, but the principles are equally transferable to many other such nations, and here I would directly include the UK, a country, like the US, which is both seen as, and one which promote itself as, a bastion of free speech, a defender of human rights, and a country where the rule of law and protection of fundamental freedoms are paramount.

Successive leaders since Truman in the US and his counterpart at the time, Clement Attlee in the UK, have in their own way subscribed to and promoted this doctrine of responsibility.

Unfortunately, however, that doctrine has become twisted and undermined by the actions, or lack of action of the respective states when faced with complex issues around the world. Yes, there has been involvement, and condemnation of certain actions have been forthcoming, however, other issues have been ignored at the cost of political expediency, at the cost of economic relationships, or at the cost of strategic support to maintain the status quo.

It is here where the lasting legacy of the West’s modern foreign policy has been forged.

The US, in particular, is failing to learn the lessons of its own recent past. In 1971, US diplomat Archer Blood sent the now infamous “Blood Telegram” to US President Richard Nixon and his national security adviser, Henry Kissinger.

That telegram in essence put the US government on notice as to what was about to happen in Bangladesh, and yet the administration chose to turn a blind eye to a genocide, all at the cost of developing a relationship with China with whom contact had been made and fostered, by using Pakistani military leader “Yahya” as an intermediary.

Fast forward 40 years, and Bangladesh develops the International Crimes Tribunal (ICT) to address those crimes of the past, and to bring prosecutions against those who are alleged to bear criminal responsibility for their part in the 1971 War of Liberation. Any such attempt at ending impunity and seeking justice for the countless victims must be applauded and supported.

It is quite clear now, and the past four years bears painful testimony to the fact, that the Bangladeshi government has sought to establish its very own brand of “victors’ justice”, and in doing so, rather than seeking to end impunity, it has merely entrenched that of the ruling Awami League; rather than truly seeking justice, it has sought to destroy a legitimate political opposition; and rather than seize the opportunity to further the development of international law, its has merely shown to the world a blueprint of what must be avoided at all costs when seeking to try such crimes.

Two executions have now taken place in the pursuit of this apparent justice. Mohammad Kamaruzzaman was executed on April 11, following a trial that has been all but universally condemned from respected commentators across the world.

In these circumstances, where a defendant is to be executed following a fundamentally flawed trial process that amounts to a flagrant denial of justice, we expect certain countries to fulfil their obligations. Countries who value democracy and the rule of law at all costs.

The US in its statement, rather than seek to condemn the trial process, and further, seek a stay of sentence, has in effect validated the trial process where no such validation can be justified.

The UK government has failed in its obligations to seek to uphold the rule of international law, and condemn those that cannot even pay lip service to its principles.

Despite the fact that the Bangladeshi Supreme Court dismissed the “review petition” without considering the application on its merits; despite the fact that the whole ICT process has been tainted by judicial and prosecutorial misconduct, government influence, and ignorance of any domestic and international fair trial standards; those giants of international relations, foreign policy, democracy, and justice have in effect remained silent.

The execution of Kamaruzzaman, of Abdul Qadar Mollah before him, and indeed of any of those still awaiting execution, will be a permanent stain on the political history of these nations.

Once again, UK lets Netanyahu get away with it 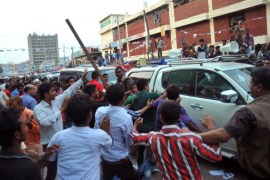 What our people deserve

As a democrat and a Bangladeshi, I fear for the future of democracy in my country. 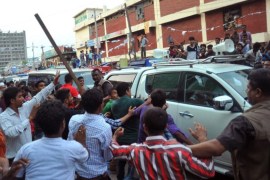 Khaleda Zia’s car was shot at and stoned by a mob while she was campaigning in Dhaka’s mayoral elections.