Never underestimate the power of denial. It is always easier and quicker to deny wrongdoing than to admit culpability or explain oneself. It stifles legitimate scrutiny in favour of a simplistic “yes / no” argument that is designed to confuse and deceive. This is what makes denial so appealing, and hence so prevalent in cases of injustice.

When it comes to the plight of the Palestinians, denial is the default setting of the pro-Israel propaganda machine. The infamous quote from former Prime Minister Golda Meir – “there is no such thing as Palestinians” – epitomises Israeli denial at arguably its most fundamental.

Justification – no matter how preposterous or morally bankrupt – is the back-up plan when denial can no longer be maintained.

For instance, it has become entirely predictable for Israel to deny bombing UN shelters – whether in Palestine or Lebanon – then justify its actions when video evidence emerges that it cannot refute.

Denial was very much on display during the filming of the latest episode of the Al Jazeera English programme Head to Head, on which I was a panellist.

The main guest, Israeli scholar Robert S. Wistrich, attempted all manner of denials, even when faced with quotes from his own writings to highlight his self-contradictions.

A recurring theme during the programme was Israeli apartheid, whose existence Wistrich denied based on “my own experience”. Apartheid is defined by the UN as including “inhuman acts committed for the purpose of establishing and maintaining domination by one racial group of persons over any other racial group of persons and systematically oppressing them”.
As a member of the dominant racial group in Israel, of course Wistrich has not experienced apartheid, but that does not mean it does not exist. Who better to confirm its existence than those who endured it in South Africa and witnessed it on visits to Israel and the occupied Palestinian territories?

“Every black South African that I’ve spoken to who has visited [Palestine] has been horrified and has said without hesitation that the system that applies in Palestine is worse,” said John Dugard, a South African professor of international law and former UN special rapporteur on human rights in the occupied Palestinian territories.

However, for Wistrich and others like him, denying apartheid is easier than justifying the unjustifiable.

Similarly, at the reception following the recording of Head to Head, Jonathan Arkush, vice-president of the Board of Deputies of British Jews – the UK’s largest Jewish organisation – told me with a straight face that there was no blockade of Gaza. This is as patently absurd as looking to the sky and proclaiming that there is no moon.

Israeli society ... is so far removed from the Palestinian experience, so physically separated from the oppressed, that Israelis may deny the obvious while genuinely believing the denial.

I was momentarily speechless, flabbergasted at Arkush’s comment, as I was when a co-speaker at a Jewish Society event at Cambridge University claimed there was no such thing as an occupation, so settlements were perfectly legal.

Perhaps that is one of the aims of such incredible denials, besides avoiding having to defend heinous policies. Perhaps, however, it has gone beyond conscious propaganda efforts.

As the saying goes, people believe their own lies if they tell them often enough. In the case of Israeli society, it is so far removed from the Palestinian experience, so physically separated from the oppressed, that Israelis may deny the obvious while genuinely believing the denial.

Many Israelis have told me that the only interaction they have had with Palestinians, if any, is at checkpoints during military service. Beyond those checkpoints is another world, out of sight and out of mind. When one is not directly exposed to a harsh truth, it makes it difficult to accept. This is what makes the testimonials of Israeli soldiers so damning.

Israel is “a society which lives in denial, totally disconnected from reality,” Levy added. “Would it be a private person, I would recommend either medication or hospitalisation. Because people who lose connection to reality might be very dangerous either to themselves or to society.”

The danger of denial is that it is based on delusion or deceit. It solves nothing – on the contrary, it only makes matters worse. It shuts down debate and makes finding common ground impossible.

Even from a purely public-relations perspective, it is ever-more ineffective. It is actually contributing to Israel’s increasing international isolation because its propaganda machine can no longer get away with denying the obvious, as much as it continues to try.

This is only widening the gap between international perceptions of Israel and its own, particularly in an age when technology and citizen journalism can circumvent Israeli restrictions and control. Once-feared government spokespeople have been reduced to objects of ridicule for blindly regurgitating narratives that are so easily debunked.

Yet as extremism and racism in Israeli society and polity continues to rise, mass-denial is becoming more entrenched and widespread. Truth and reconciliation commissions have been effective at resolving other conflicts, but Israel seems headed in the opposite direction, treating truth as an obstacle to a solution rather than a key. A moment of clarity could not come soon enough, for the sake of both peoples. 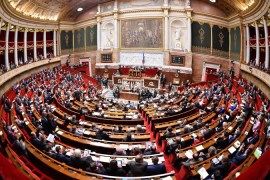 Palestine’s wasted time at the UN

Palestinians should have known that the US would vote ‘no’.