The dazzling, daring, death-defying phenomenon that reinvented North America‘s three-ring circus of dancing bears and tiny cars and clowns is folding its tent in its Quebec birthplace.

Figuratively speaking, that is.

On Monday at his Montreal headquarters, Cirque du Soleil owner and cofounder Guy Laliberte, 55, confirmed what had been rumoured for weeks. He was selling his entertainment empire for a reported $1.5bn.

But he won’t be completely letting go. He will retain a 10 percent ownership and remain as a strategic and creative consultant.

The majority share of 60 percent is going to the Fort Worth, Texas-based private equity firm TPG Capital, 20 percent to China’s Fosun Capital Group and 10 percent to the Caisse de depot et placement du Quebec, which manages public pensions plans in the province.

As for le Cirque’s “Studio”, the 35,000-plus square foot complex deliberately built in one of the poorest areas of Montreal, it will remain in place. There, some 1,500 workers – from cooks to cobblers, physiotherapists to production designers – will continue to develop shows, train performers, invent equipment, and create costumes.

“I am thrilled that the investors have demonstrated such a strong commitment to Cirque’s unique Quebec cultural heritage and the creativity and imagination of our people,” said Laliberte in a statement.

There would be riots in the streets if the big show quit Quebec. In fact, opposition politicians have demanded that the provincial Liberal government stop the sale. But Premier Philippe Couillard has declared that the government would not interfere with “a private transaction”.

All this concern because, unlike other Quebecois businesses that have been taken over by foreign concerns, Cirque du Soleil is very much a reflection of the distinct cultural ethos that sets Canada’s French-speaking province apart from its Anglophone neighbours. Le Cirque is a button-busting brand that all Quebecers are proud of, bigger even than homegrown diva Celine Dion.

Both have been Las Vegas phenomena. Indeed, le Cirque boasts eight permanent shows on the strip, including the aquatic heart-stopper “O” which has been packing crowds into the luxurious Bellagio hotel at more than $100 a seat since 1998.

With a total of 18 productions mounted in 2015, Cirque shows go on and on somewhere on Earth at any given hour.

Laliberte, the one-time stilt-walking clown, whose creation has entertained 150 million people since its modest beginnings in 1984, said on Monday that he would not pass the business on to any of his five children. They have their own “passions”, he insisted. In fact, he added, he’s selling to spend more time with them and to purse his philanthropic interests, including One Drop, which fights poverty by investing in clean water projects.

Considering his reputation as a poker-playing, hard-partying playboy, it’s a sure bet that he’ll also be juggling other activities.

Laliberte is such a high-flyer that, in 2009, he paid $35m to take the Soyuz mission to spend 11 days on the International Space Station.

“It was beyond crazy; it was complete insanity for hours. Everyone was so beautiful and so free,” recalls former Playboy pin-up Angie Everhart. “If there was a straight person in the house they must have freaked out watching everyone else trip. They would have thought they were the one on drugs.”

“I have attended the finest parties all over the world, but nothing that compares to this,” recounts Myra Jones, a Milan-based fashion model who would jet in for the annual event. “Everything you wanted was available at Guy’s parties – drugs, the best music spun by famous DJs flown in from Europe and the US, and the wildest sex you could ever imagine.”

Halperin also delved into Laliberte’s messy and much-whispered about split from the young mother of three of his children.

The book so enraged the billionaire that he tried to get the book pulled from the shelves.

The past few years have been a bit of a balancing act.

Competition, including by a former Cirque executive, has increased as the concept of acrobatic circuses has spread. Touring Cirque shows have not been as successful as in the past. Attempts to crack the Asian market have been a failure.

And, in June 2013, Sarah Guillot-Guyard, a 31-year-old mother of two, tumbled 94 feet to her death during a gravity-challenging battle scene in “Ka”. According to a Wall Street Journal investigation into the Cirque’s safety record, the Las Vegas-based production is the most envelope-pushing in Laliberte’s empire.

Sure, he might have sold for more a few years ago, he may concede. But, despite the slight downward spiral, Laliberte told reporters that the Cirque was not going in “a fire sale”.

Back when he was a penniless street performer, he swallowed fire.

He is not going to flame out any time soon. 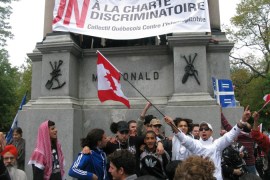 The death of multiculturalism in Quebec

Under the cover of promoting secularism, a proposed charter aims to exclude some religious practices and symbols. 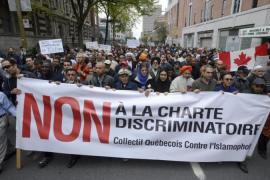 The Parti Quebecois is setting the stage for a possible final and winning referendum to secede from Canada.