A year ago this week, 16 Nepali high-altitude workers were killed by an avalanche on Mt Everest. It was the worst single disaster ever on the mountain. And this week the climbing season is gearing up again, with at least as many groups in Base Camp as last year.

That’s natural enough. After all, everyone has always known the risks – and climbing Everest has, by and large, become safer as it has become more commercial. What’s more, when grieving and angry high altitude workers went on strike in the aftermath of the disaster, last year’s climbing season was cancelled, so some of those clients have come back for another try. For thousands of people, to stand on top of Everest is a consuming ambition.

The workers, most of whom belong to the small, tight-knit Sherpa community (all but three of the victims were Sherpas), went on strike because they were angry at the government’s offer of $400 compensation for the families of the dead, and appalled that some clients and operators wanted to press on despite the tragedy.

They were also aware that while most clients – who pay tens of thousands of dollars each – would have no chance of reaching the top without intensive support, the climbing Sherpas receive only around $5,000 each for the whole gruelling and dangerous season. They felt undervalued and exploited.

Similar feelings produced a famous “brawl” the year before, when a perceived insult to a group of Sherpas, and a supposed threat to their safety, led to a punch-up with foreign climbers.

On both occasions there was, among other reactions, a clear tendency to indignation among the tourists quoted in the foreign press, that the Sherpas weren’t playing their part. In other words, the potential for outrage and miscomprehension is somewhat mutual.

This situation partly arises from western ideas of a “Sherpa”. They are expected, indeed “known”, to be loyally devoted to their clients even in the most adverse circumstances, unfailingly brave, super-humanly strong, and, significantly, subordinate.

Not by coincidence, the stories foreigners tell themselves about Sherpas resemble the stories that foreigners tell themselves about Gurkha soldiers. (It is worth pointing out that while “Sherpa” is the name of a community frequently mistaken for a job description, “Gurkha” is a job description frequently mistaken for the name of a community.) Like the brave, “fiercely loyal” Gurkha, the Sherpa stereotype is of colonial vintage. Perhaps it has endured because, although patronising, it is seen as benign and has served both sides.

Following the 2014 disaster, high altitude workers brought a list of demands to the government (which charges all Everest climbers a hefty fee. This year the fee is $11,000 for each climber.) In response, the government has increased insurance and other welfare provisions this year. These measures have been sufficient to restart the industry.

With luck and due caution, last year’s tragedy will not be repeated. But it is unlikely that labour relations on the mountain will go back to what they were.

In many sections of Nepali society, people who previously accepted their subordination are now more educated, more likely to consider themselves exploited, more vocal and demanding.

There may well be renewed demands over pay and conditions in the future, and visible anger if newly assertive workers consider themselves disrespected or misused.

Somehow, despite having become a province of the tourism industry, inhabited by the kind of clients who 20 years ago might have been satisfied with the London marathon, Everest still attracts unquenchable international interest for any story, however tired (garbage on the mountain!), or specious.

For example, last week, newspapers around the world picked up an utterly improbable yarn, that the Chinese are going to build a railway “under” Everest.

In fact, any Chinese railway extension is expected to reach Nepal at Rasuwa, 130km to the west, where a valley lies across the border instead of a mountain, and where they are already building a “dry port”. The story, of course, says everything about what people are ready to believe about the Chinese, and nothing about Himalayan geography.

Myself, I tend to see the ethics of climbing Everest today as a version of the issues around, say, jobs in the Bangladeshi garment industry – except, of course, with extra adrenaline. Like other poor-country jobs, high altitude work is potentially lethal, seemingly underpaid and exploitative, and yet, it is argued (not without justification), that people choose to do it because it’s a better deal than all the others. Improvements can always be made.

No doubt it’s true, as people say, that Everest has long been a mirror of the times. Once it was a venue for imperial “conquest”. During the Alpinist era of the 1980s it was a place for dashing individualism. And these days, what? Environmental degradation? Labour exploitation? The empowerment of former subordinates? The democratisation of adventure, even? As the comments section beneath most articles seems to show, everyone can decide, just like anyone can climb it.

Thomas Bell has reported on Nepal for over a decade. His new book of history and reportage, “Kathmandu”, is published by Random House India. 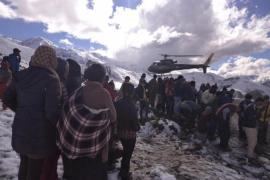 The Annapurna disaster exposes the gulf between the tourists and the locals. 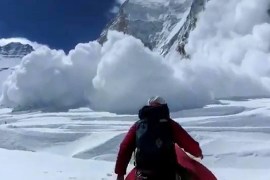 Shutdown on the world’s highest mountain

Local guides are refusing to take climbers up Mt. Everest after the deaths of at least 13 of their colleagues.