When Barack Obama was first elected in 2008, many inhabitants of the globe hoped that with the transition would come a more sympathetic US foreign policy. After all, a member of a historically persecuted cohort in the United States couldn’t help but feel for the oppressed international masses, right?

Needless to say, such hopes were dashed to smithereens when Obama promptly gave George W Bush a run for his money in terms of general disregard for human life.

Besides failing to kick the old US habit of slaughtering civilians, Obama also worked hard to maintain the national image as a backer of right-wing coups and other meddlesome, profit-driven behaviour. Not long after assuming office, Obama had his first chance to remind Latin America who was boss by supporting the 2009 overthrow of the ever-so-slightly-leftward-leaning Honduran President Manuel Zelaya.

Although the US repeatedly denied involvement in the affair, Obama’s then-secretary of state belatedly let the cat out of the bag – acknowledging in her memoir last year that she had strategised to prevent Zelaya’s (lawful) return to office.

Since the coup, Honduras has become the homicide capital of the world, with impunity for lethal crimes also benefiting state security forces on the receiving end of US aid.

The secretary of state in question was, of course, none other than Hillary Clinton, who has just announced her own bid for the spot of imperial commander-in-chief.

Given Clinton’s track record, the global population may refrain from rallying behind the idea that a US president belonging to a historically oppressed gender will be nicer to humanity.

But that doesn’t mean her supporters won’t do their darnedest to sell the image of Clinton as a die-hard women’s rights advocate, among other alleged progressive accolades.

In a recent email to me, journalist Rania Khalek debunked a few of these misconceptions:

“Clinton has spent her entire career pushing policies that have destroyed the lives of countless women and children, from her role in rounding up votes for her husband’s disastrous welfare reform bill to her vote as a senator in favour of the US invasion that left Iraq, and its women, in ruins.”

Nor should the world find much solace in Clinton’s counter-jihad plans, which she outlined in a 2014 interview with The Atlantic’s Jeffrey Goldberg. Likening the struggle against Islamic terrorists to the struggle against the Soviet Union, Clinton acknowledged that, during the cold war, “we supported really nasty guys, we did some things that we are not particularly proud of, from Latin America to Southeast Asia”.

In the end, however, communism collapsed: “We achieved it.” Nevermind all the foreign bloodshed – or that whole link between the anti-Soviet war and the present jihad.

Regarding certain objectively “nasty guys” on the contemporary scene, meanwhile, Clinton had nothing but positive things to say. Questioned by Goldberg about the most recent Israeli assault on the Gaza Strip – in which well over 2,000 Palestinians were killed, the vast majority of them civilians – the presidential hopeful opined: “I think Israel did what it had to do.”

She then went as far as to propose possible anti-Semitic motives for opposing Israeli actions.

And this is not the only instance in which we’d be forgiven for thinking Clinton was actually running for office in Israel; during her previous campaign in 2008, she warned that “we would be able to totally obliterate” Iran in the event of an attack on the Jewish state.

In a November essay for Harper’s, titled “Stop Hillary!“, Doug Henwood marvels at the “widespread liberal fantasy of [Clinton] as a progressive paragon” – an image not easily reconciled with her tendency to out-hawk the hawks. “She backed an escalation of the Afghanistan war,” Henwood writes, “lobbied on behalf of a continuing military presence in Iraq, urged Obama to bomb Syria, and supported the intervention in Libya”.

So much for that hallucination of an impassable chasm between the Democratic and Republican camps, by means of which partisan fanatics can blame everything on the other side rather than on the system itself.

The subheadline of Henwood’s article contains the following appeal: “Vote no to a Clinton dynasty.” He’s got my vote – but while we’re at it, let’s also vote “no” to a putrid duopoly that feigns irreparable division while remaining fully united in cultivating and exporting calamity. 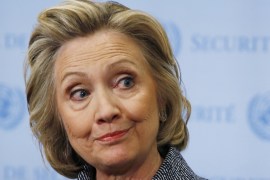 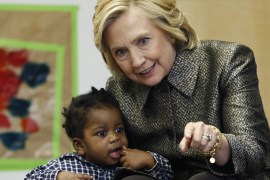 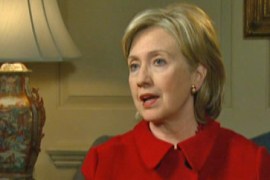