When Muhammadu Buhari is first addressed as Nigeria’s president-elect on April 1 – a day when people traditionally play hoaxes on one another – he will be forgiven for thinking someone is playing an “April Fool” on him. For many reasons, this is a victory that will not immediately sink in.

By receiving 15,424,921 votes to Goodluck Jonathan’s 12,853,162, Buhari becomes the first man to overthrow (by the ballot) a sitting Nigerian president. He becomes the first man in Nigeria’s 16-year fourth republic to defeat a PDP candidate. When he takes over in May 2015, he will become the first septuagenarian to assume the country’s highest office. This is the same Buhari once derided as a “perennial presidential aspirant” after three previous attempts all ended in resounding defeats.

For the first time, Buhari is no longer a leader of northern Nigeria. Statistics of this election show he now has the national acceptance he sorely lacked. This is the first time in four attempts that Buhari has won more than one state in the north-central zone. Before now, he never won a state in the southwest. But this time he not only won his first southwestern state, he won four more.

All these feats would have been mere tantalising phantasms without Attahiru Jega, the same electoral umpire who was demonised in the lead-up to the election by both Jonathan’s PDP and Buhari’s APC. Only in January, Buhari claimed that Jega’s INEC programmed its computers to short-change his votes by 40 percent.

Meanwhile, PDP’s anti-Jega crusade began back in September 2014 when he announced additional polling units, and then reached a head with his insistence on checking electoral fraud with the use of voter card readers.

The last few weeks have been particularly difficult for him, especially seeing plans being mulled to relieve him of his job, and being literally coerced by the security chiefs into shifting the elections. This is why, notwithstanding the lapses that accompanied this election, Jega deserves nothing but ovation.

On the third day of elections, some people in Jonathan’s camp were still making last-gasp efforts to scuttle the electoral process. For some inexplicable reason, some state collation officers were “deliberately” refusing to turn up at the national collation centre to turn in their already-compiled results – that was after INEC offered to fly them to Abuja, even though that was the duty of the officers.

Jega faced his stiffest test of the election on Tuesday, when Godsday Orubebe, a man so inappositely fascinated by the title “elder”, acted in a far-from-elderly manner by rascally stalling the opening of the day’s collation. For more than 30 minutes, Orubebe, who has nothing to show for his four years at the saddle of the Niger Delta ministry, screamed and hurled expletives at the INEC chairman.

But Jega, to the admiration of millions of Nigerians, responded calmly, reminding Orubebe of his duty to the country as a former minister of the federal republic. It was a moment of immense embarrassment for Nigeria, but it was also a moment when Jega showed the world that for every Judas Iscariot, Nigeria probably has 11 other disciples. In the decades to come, the story of Nigeria’s 2015 election will be incomplete without detailed reference to the integrity, impartiality and conscientiousness of Attahiru Jega.

My impressions about the scale of corruption, mediocrity and failed promises that have defined the Jonathan years are well-documented. But he will have my credit for helping to enthrone peace during and after the elections, much to the consternation of the international community. On Saturday, when four INEC card readers failed to clear him, Jonathan preached peace and urged Nigerians to support the INEC. A moment of madness from him at that time could have sparked violence.

Additionally, once the president realised the game was up, he telephoned Buhari to concede defeat, thereby setting the tone for a peaceful handover. After failing to sign the results sheet, Jonathan’s PDP looks primed for a fruitless legal tussle – but it is of no consequence.

By conceding defeat, Jonathan succeeds in masking his numerous inadequacies with one final show of statesmanship. In the developed world, this action will amount to nought. At this phase of Nigeria’s democracy, it should be praised. In the final analysis, history will be kinder to Jonathan than his underwhelming four years deserve – because he will not be remembered as the one who made life difficult with fuel price increases less than a year into his tenure; or the one under whose watch Boko Haram blossomed; or the one in whose time the naira fell to its all-time low; or the one in whose care billions disappeared without consequence; or the one who granted state pardon to one of Nigeria’s most notorious and ignominious public-office thieves.

Jonathan will be remembered as the first civilian president to peacefully hand over power to another. That, matter-of-factly, is an undeservedly glittering end to what has been an unflattering four years.

Buhari’s victory triggered wild jubilation among his supporters all over the country, and he quickly released a statement to say the celebrations should be instead “sober”. Perhaps this is the first sign of a man who will not get easily carried away.

Buhari will do well to remind himself of how quickly a leader in Nigeria can fall from hero to the fall guy. His party has promised so much during this campaign; the work needing his attention his even much more.

The General needs to look no further than the man whose political downfall he has just masterminded. Some of the men who marched on the streets of Abuja to demand Jonathan’s installation as substantive president (during the late Yar’Adua’s illness) were at the forefront of the campaign that uprooted his government. There is little margin for error, else it is Buhari who would be conceding defeat in 2019. 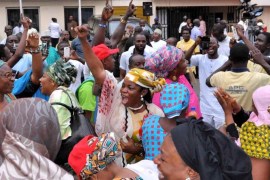 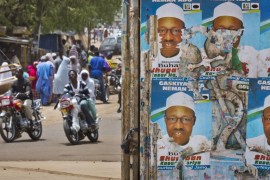 Goodluck Jonathan hopes it will be 2011 all over again

This may well be Nigeria’s closest presidential election ever.