There is always a temptation, whether for the March on Washington, the Civil Rights Act, or the Selma March to try and ascertain what has gotten better or worse for African Americans when it comes to civil rights over the last 50 years.

But to be honest, that is a question better left to economists and statisticians, you can easily find information on home ownership, employment rates, education and life expectancy and see the mixed bag that the last half a century has been for African Americans. The more interesting question is how do we commemorate violent, complicated events of the past, and what that really tells us about the future of civil rights in the US.

The original civil rights march across the Edmund Pettus Bridge from Selma to Montgomery is heralded as the turning point in the American civil rights struggle. Led by a young Martin Luther King still coming into his full abilities, the hostile reaction of the local police department and state government was plastered all over American newspapers and television screens.

Complacent whites and heretofore intimidated African Americans were galvanised into action, and a week after bloody attacks by dogs and tear gas, President Lyndon Johnson was pushing the Voting Rights Act of 1965. This is a clean and convenient version of the story, one that can be told in quick speeches and recited by eager high-school students during evening programmes and rattled off by the clergy. The reality was much more complicated.

The entire conflict took weeks to prepare and organise. There were local and national activists, there were bitter conflicts between the “old guard” ministers led by Martin Luther King and the Southern Christian Leadership Conference (SCLC), and the youthful activists of the Student Nonviolent Coordinating Committee (SNCC).

National attention didn’t turn to Selma until James Reeb, a white clergyman, was killed by local Klan members (even though violence against blacks had been commonplace for weeks) and even then the US did not speak with one voice supporting the civil rights movement.

But that is not the story that we hear from US President Barack Obama on the podium right in front of the Pettus Bridge as he commemorates the anniversary. Those are not the stories told by the young leaders and activists in the midst of crowds and celebrations. Because in the end, Americans want a mythical happy ending to our struggles, wars are over, conflicts are solved, rights are obtained and thus we can have a collective sense of accomplishment and move on. It is this kind of mythmaking that framed the president’s speech in Selma.

Obama spoke passionately about how much the nation had changed in 50 years for African Americans, for women, for Latinos and for the Gay/Lesbian and Transgender community. He challenged those who cynically suggest that Ferguson shows how little America has changed to realise that at least today the actions of that police department in 2014 are illegal, whereas they were not 50 years ago. All of this is true, and while Obama gives lip service to the notion that there is more work to be done, the harsh reality is that we have little true understanding of how hard it was to accomplish what happened 50 years ago which makes envisioning the next 50 years all the more complicated.

In the end, Americans want a mythical happy ending to our struggles, wars are over, conflicts are solved, rights are obtained and thus we can have a collective sense of accomplishment and move on. It is this kind of mythmaking that framed the president's speech in Selma.

By whitewashing the struggles of the past 50 years, it bolsters a level of impatience and naivete about the racial problems in the US today. The Ferguson protests, which spread to New York, San Francisco and the rest of the nation are criticised today as being disorganised, lacking true leaders, or unified goals to accomplish.

Subconsciously, all of these attacks are based on the mythologised view of the “past” civil rights movement, where everything was wrapped up conveniently with federal legislation. There is little or no mention of the decades of local legislative fights about housing, school integration and employment that raged into the 1980s.

In Selma, there was the celebration of change but the dismissal of the less exciting process of implementation. This is because America wants to celebrate results, not process, but change only occurs through process, thus our celebrations and commemorations always have a sense of telling only half the story.

In 2064, it’s likely that an American president will visit what remains of Ferguson, Missouri, and give a speech about Mike Brown. By then he will only be known in classrooms as the boy 48 hours from heading to college, gunned down blocks from his grandmother’s house by a white police officer who got off scot free with the help of a corrupt police force and a kangaroo court trial.

That president will say Ferguson changed America’s views on policing and race, and soon reforms occurred throughout the nation leading to more police oversight, less militarisation and the eventual adoption of non-lethal police weapons.

No one will talk about how Mike Brown was called a “thug” in 2014, or how shootings of unarmed black men continued unabated, or how many African Americans felt that the first  black president wasn’t doing enough to address police brutality and institutional racism.

That “process” will be lost to history in favour of a commemoration. So the question is never how far Civil Rights have improved in the US, it’s more about how optimistic is the revisionist story we tell. And given that the Selma speech was delivered by an African American president, we can conclude that progress has been made, so long as we don’t have to talk about how hard it was for him to even get there.

Dr Jason Johnson is a professor of political science at Hiram College. He is the author of “Political Consultants and Campaigns: One Day to Sell”. 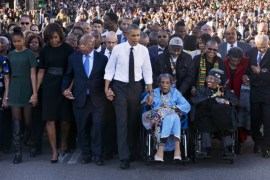 Obama, Selma, and the right to vote

Fifty years after bloody fight for right to vote, why is the president urging people to vote and why don’t they listen? 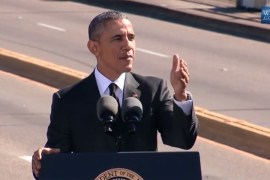 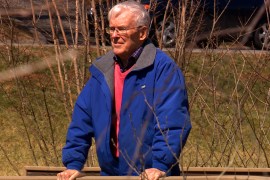 The unsung American heroes of Selma