On March 1, Uruguay celebrated the beginning of a new presidential mandate by Tabare Vazquez of the left-wing Frente Amplio coalition. At the same time, the country also commemorated a historic moment: The 30th anniversary of the democratic transition after over a decade-long brutal dictatorship.

Indeed, on March 1, 1985, the swearing in of president Julio Maria Sanguinetti formally brought to an end the civic-military regime that had been governing since June 1973, a regime that earned Uruguay the infamous nickname of “the torture chamber of Latin America“, for having the largest number of political prisoners per capita in the world.

Thirty years on, responding to the human rights violations committed during Uruguay’s darkest hour remains an unfinished business. Thousands of torture victims have never had access to justice for what they suffered or have not been adequately compensated. Hundreds of mothers and relatives of victims of enforced disappearances are passing away without knowing what happened to their loved ones.

Truth-seeking investigations have often been limited to disappearances and assassinations, leaving other forms of brutality (especially torture, political imprisonment and sexual violence) unaddressed and unexplored. Uruguayan society as a whole has yet to fully process and incorporate what occurred during the dictatorship, not only in history books, but also in its very social and political being.

Horrors of the dictatorship

For 25 years, an amnesty law (the so-called Ley de Caducidad) enacted by Parliament in 1986 prevented any investigation into the horrors of the dictatorship. This law was eventually overturned in October 2011. Yet, justice has remained elusive, with judicial proceedings stalling lately and obstacles to accountability and truth-seeking raised by the Ministry of Defence and the Supreme Court of Justice.

A recent report by the International Commission of Jurists (ICJ) expressed its concern with what it labelled a “paralysis in the investigation of human rights violations”, pointing to the repeated hindrances in truth and justice in Uruguay. The commission particularly emphasised how the country should not accept “a legacy of impunity” and “silence”.

Indeed, despite there being 256 criminal cases making their way through the judicial system, only six (two percent) have been completed with a final sentence from the Supreme Court. The vast majority, 63 percent (164 cases) are at the pre-indictment stage and just three percent (eight cases) reached the indictment phase. Moreover, since the overturning of the amnesty in 2011, only one new trial was initiated in March 2012 and just six trials were concluded in the three years since. In Argentina, during the same time period, 58 trials were completed. The contrast could not be starker.

Vazquez is no newcomer to this issue. Undeniably, most progress on accountability for past crimes took place during Vazquez’s first presidential mandate between 2005 and 2010. In fact, important verdicts for human rights violations were then dictated by the country’s courts, including against former dictators Juan Maria Bordaberry and Gregorio Alvarez.

While Uruguay has been recognised worldwide as a leader for legalising same-sex marriage and abortion as well as other progressive social reforms, it has been internationally criticised for its conservative stance on justice for the dictatorships' crimes.

Excavations on military premises led to the discoveries of the remains of some victims of disappearance and reparations laws (albeit suffering from significant shortcomings) were sanctioned for victims.

During the presidency of his successor Jose Mujica (2010-2015), accountability slowed down, leading to the paradoxical situation where, while Uruguay has been recognised worldwide as a leader for legalising same-sex marriage and abortion as well as other progressive social reforms, it has been internationally criticised for its conservative stance on justice for the dictatorships’ crimes.

The question of the recent past has, however, been under the spotlight recently and the new president will have to deliver on this issue. Just before being elected for his second mandate, a group of 60 international academics sent an open letter to Vazquez and his opponent, calling on whoever was elected to urgently work on justice, truth and reparations in the next period of government.

Similarly, Wilder Tayler, secretary-general of the ICJ, asserted that in Uruguay impunity was “not inevitable”, hoping that the next government would show determination and leadership in addressing the issue of the recent past. Finally, the Inter-American Court of Human Rights will continue to monitor Uruguay’s compliance with its 2011 Gelman sentence, so pressure is on Uruguay to finally meet the court’s recommendations.

Vazquez has already vowed to continue investigations into the fate of the disappeared. Recently, he also launched a Working Group on Truth and Justice, composed of leading political and religious figures and with an ambitious mandate of gathering information on past crimes as well as monitoring trial and reparations proceedings. The Working Group is yet to embark on its task so it is premature to make any assessment.

However, as the director of Amnesty International Uruguay stated a few days ago: “In order to obtain justice, it is necessary for the judiciary to conduct its work, having access to information.” Therefore, it is particularly urgent that the new government creates the conditions necessary for the tribunals to push ahead their investigations and clear the backlog of hundreds of pending cases, some of which were originally presented back in the 1980s. The government will have to guarantee access to the archives as well as the provision of relevant resources (legal, forensic, police, and psychological support for the victims) needed to support the justice process.

Over the next five years, the Vazquez administration has a historic opportunity to finally deliver truth, justice and reparations to the victims of human rights atrocities and their families, as well as to the rest of society. Fulfilling the rights to truth, justice, reparations and guarantees of non-recurrence is a responsibility of the three branches of the Uruguayan state. All of them must not miss this opportunity for justice before it is too late.

Dr Francesca Lessa is a postdoctoral researcher at the Latin American Centre at the University of Oxford, specialising on issues of justice and human rights in Argentina and Uruguay.

Landscapes of Memory: Argentina’s persistent struggles over the past

A silent anniversary in Uruguay?

‘Breaking the wall of impunity’ in Uruguay 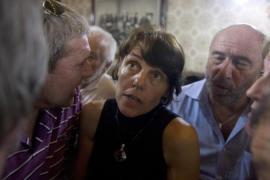 Activists in Uruguay remain hopeful, despite enormous challenges, that justice will be served to dictatorship victims. 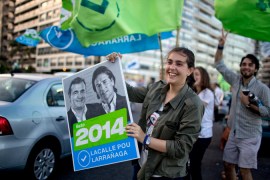 Old versus the new in tight Uruguay election

Voters in Montevideo tell Al Jazeera who they want to replace President José Mujica with – and why. 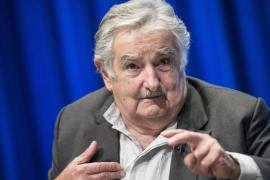