The book launch was held in a large restaurant last weekend in the middle of the South Sudanese capital, Juba. Veteran journalist and editor of The Citizen, Victor Keri Wani, was being celebrated for his 40 years in the media business, an eternity in a country that had successfully split from its northern neighbour in 2011 to become the world’s newest nation.

After extensive introductions, the only male speakers spoke warmly about Wani’s broad career. Mentioned by nearly all of them were the absence of South Sudanese history written by locals. Let’s not wait for foreigners to do it for us, they agreed.

The lack of a local publisher made it impossible for the innumerable manuscripts by academics and intellectuals to find a home. Wani concurred and thanked the enthusiastic crowd, dressed in their Sunday best clothing, and hoped that the country wouldn’t be solely defined through its ongoing war and ethnic strife.

This will be a challenge. Since fighting broke out in December 2013, killing tens of thousands of people in the months ahead, the nation has been torn apart by brutal conflict, the recruitment of children to fight and evidence of horrific mass rape.

Over 100,000 people continue living in protection of civilian camps in five states, some fearing for their safety. Displacement of civilians has been extensive, something I’ve witnessed in Wai in Jonglei state and Ganyiel in Unity state.

I heard from countless men, women and children who expressed anger at the inability or unwillingness of the warring factions to make peace. These relatively brazen views are growing in strength, posing a threat to the ability of the state to remain even moderately secure and contiguous.

In both Wai and Ganyiel, the United Nations and various NGOs are providing food, water and medical care. The UN says 2.5 million people are food insecure nationwide and this figure could increase to four million by the end of the year.

In Wai, 25,000 civilians are living mostly in the open air, fleeing areas where fighting is a daily reality. In Ganyiel, situated near swampy ground, the region is relatively peaceful but beset by threats of flooding as the rainy season approaches. Over 100,000 civilians are given food aid air-dropped by the World Food Program (WFP). It’s a miserable existence.

It's a mistake to presume this is all just another African war with barely discernable details.

But it’s a mistake to presume this is all just another African war with barely discernable details.

At its birth, South Sudan was given a US stamp of approval, destined to be a reliable bulwark against China, a superpower that had spent the decade post 9/11 massively expanding its footprint on the continent.

What Washington either ignored or dismissed, according to a recent Foreign Policy feature, were vital details about reliable infrastructure and oil production, trained doctors and teachers, forces to contain corruption and sustainable agriculture.

It all collapsed so quickly that left to pick up the pieces was various UN agencies and NGOs.

Today, according to South Sudan’s UN humanitarian co-ordinator Toby Lanzer, 400,000 children are out of school and for every 100 kids who start primary school only one will finish secondary education. That’s at least one lost generation and counting.

South Sudan has become an aid-dependent entity, bringing necessary questions about the sustainability of this arrangement. The ability for states to survive principally from the support of governments, donors or corporations looking to turn a profit is doubtful.

From the Pacific to Africa, the fate of nations is too often decided in the boardrooms of London or New York. The last years in Australia and Britain have seen a growing trend to tie aid to the profit motive, helping Australian and British businesses with possibly a few scraps coming the way of locals in developing nations.

Aid is never benign and is always tied to a richer nation hoping to gain some advantage in a poorer one, whether it’s political influence, business gain or poll position when a resource industry emerges. Like clockwork, South Sudan recently announced it was open for mining business.

The need for indefinite aid in South Sudan is unquestioned and this year alone the UN needs $1.8 billion in assistance. I’ve met nobody in South Sudan who questions the necessity of gaining sovereignty in 2011 – a position echoed in South Sudanese communities from London to Sydney.

And yet with a faltering economy, a government printing more money and bundles of cash being flown into Juba in the middle of the night, 21st century independence in the heart of east Africa is faltering. 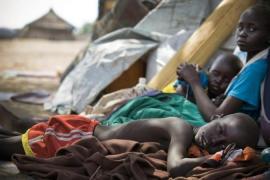 South Sudan’s massacre among many

What happened in Bentiu is one in a series of massacres stretching back decades into South Sudan’s troubled history.