As the two among the organisers and participants of the Subversive Festival in Zagreb in May 2013, we were happy to invite Yanis Varoufakis – now Greece’s finance minister – to give a public lecture at the Festival and to present his book “The Global Minotaur”.

In answering a question from the public, Varoufakis did not point the middle finger at Germany or the Germans but was talking about a hypothetical situation referring to January 2010 when Greece owed not one Euro to German taxpayers. His idea was that Greece should have defaulted to its private creditors rather than take on a huge loan from its European partners (including of course Germany).

In the recent outcry, Varoufakis’s gesture (or a figure of speech) and its meaning were thus torn out of the context by German media and manipulated in the most brutal propaganda manner: his figure of speech from two years ago was related to a totally different situation.

So why bring out that forgotten detail from a conference in Zagreb? The answer is easy to guess: it is part of a very dubious strategy to discredit the Syriza government.

All the racist cliches about the lazy Greeks who want to live at the expense of hard-working Europeans are shamelessly mobilised. What reality does such an approach obfuscate?

In negotiations with the EU as well as in his public statements, Varoufakis consistently displayed a modest approach of finding a rational way out of the deadlock, expressing readiness for compromises which even triggered the first demonstrations against Syriza in Greece. What he and Greece are getting in response is a repeated humiliating refusal to engage in serious negotiations.

Varoufakis did not point the middle finger at Germany ... but was talking about a hypothetical situation referring to January 2010 when Greece owed not one Euro to German taxpayers.

The sad message of all this is clear: to add insult to injury, Greece has to be not only kept in financial chains but also humiliated. And the ultimate victim of it will be all of us, in short: Europe.

Insofar as “sticking the finger to Germany”, “Germany” clearly didn’t refer to the state or people but to the German government which was at the time (and is today) the main representative of the disastrous austerity policies in the EU.

In this respect, it was the finger pointed in the right direction. That message was clearly understood by anyone present at the Subversive Festival in May 2013 as it should be today, especially in Germany.

Thus the real scandal is not the use of the good old Greek tradition of the middle finger (who hasn’t shown the middle finger at least once in his life?), but what Germany (or the German government to be more precise) is doing to Greece and the rest of Europe.

So in the midst of this debate about fingers, let’s not forget the big fat finger Berlin and Brussels are raising at Greece.

Slavoj Zizek is a Slovenian Marxist philosopher and cultural critic. He is currently a senior researcher at the Institute for Sociology and Philosophy, University of Ljubljana in Slovenia. 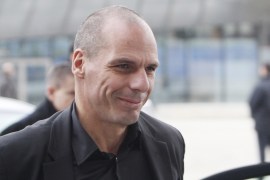 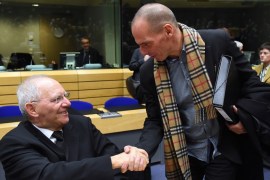