In October last year, Htin Lin Oo, a writer and former information officer for Myanmar’s main opposition party, the National League for Democracy (NLD), gave a speech condemning religious extremism in the country. The comments appeared innocuous enough – Htin Lin Oo, who addressed a crowd of around 500 people, criticised how some groups take advantage of religion to stoke discrimination.

But then a short excerpt from his speech was circulated on social media, where many of Myanmar’s Buddhist nationalist groups have a growing presence. Taken out of context, the comments caused a storm that led to his arrest shortly after. Today, he is languishing in a prison in the central Sagaing region, facing trial for “wounding religious feelings”.

The uproar against Htin Lin Oo’s comments is no surprise. The past years in Myanmar have seen a disturbing rise in religious intolerance, often fuelled by hardline Buddhist nationalist groups, directed particularly at Muslims.

But instead of tackling these issues head on and trying to defuse tensions, the Myanmar authorities continue to take steps that could fan the flames of intolerance even further.

At the moment, parliament is debating a series of repressive bills – ostensibly aimed at “protecting race and religion”. If they become law they would not only give authorities free rein to further discriminate against minority religious groups and women, but could also provide the spark for further ethnic violence.

To understand why the laws are so troubling, consider the context in Myanmar. As hardline Buddhist nationalist groups have gained support and grown in influence, so has their hate-filled rhetoric. The UN Special Rapporteur on human rights in Myanmar, Yanghee Lee, got a taste of this when she visited the country in January this year and was branded a “whore” by the leader of one such group – simply because she had dared to raise the human rights of Muslim minorities.

Most of the rhetoric has been aimed at Myanmar’s non-Buddhist groups, in particular the Rohingya minority. The Rohingya have faced decades of institutionalised discrimination – they are denied citizenship and with that access to basic services. Waves of violence dating back to 2012 have left scores dead, and hundreds of thousands of people – mainly Rohingya – are today languishing in displacement camps in desperate conditions.

Anti-Muslim sentiment or even attacks has been sparked by their often unfounded accusations of violence - including rape - committed by Muslim men against Buddhist women. Too often, notions that 'vulnerable' Buddhist women need 'protection' from other religious groups are propagated.

There is also a disturbing gender aspect to the nationalist groups’ rhetoric. Anti-Muslim sentiment or even attacks has been sparked by their often unfounded accusations of violence – including rape – committed by Muslim men against Buddhist women. Too often, notions that “vulnerable” Buddhist women need “protection” from other religious groups are propagated.

The bills currently tabled in Myanmar’s parliament play into some of the worst – and patently false – stereotypes being spouted against Muslims and women in particular.

If passed, one of the laws would require those who want to convert to a different religion to apply through a government-body, even though international law guarantees the right to choose one’s belief.

Vaguely-defined local “Registration Boards”, made up of government officials and community members, would “approve” applications for conversion – essentially opening the door for local authorities to further discriminate against minorities.

Another bill – the Buddhist Women’s Special Marriage Bill – imposes a series of “provisions” on non-Buddhist men who marry Buddhist women. Not only is the law inherently discriminatory on a gender basis, since it imposes no similar provisions on the wife, it also blatantly plays to stereotypes that non-Buddhist husband will seek to forcibly convert their Buddhist wives.

Another bill ostensibly aims to provide family planning for communities living in poverty, but could at worst become a blueprint for state population control. The bill, which apparently plays into fears that minority groups are having more children than the Buddhist majority, establishes a 36-month “birth spacing” interval for women between child births, though it is unclear whether or how women who violate the law would be punished.

Family planning is to be encouraged, but should never be imposed by the state. An almost complete lack of human rights safeguards means that the bill could even pave the way for state-enforced contraception, abortions or sterilisation.

Myanmar is entering a crucial year with elections in November. The country is facing a range of serious political and economic issues – ranging from widespread poverty to questions over the progress of political reforms that were introduced in 2011. The proposed “protecting race and religion” laws are a distraction from these serious issues – they should never have been tabled in the first place and must be scrapped.

Myanmar’s authorities should work for reconciliation between religious and ethnic groups and address the range of pressing issues facing the country – not play into hatred and fear, and seek to cement already widespread discrimination.

Richard Bennett is the Director of Amnesty International’s Asia Pacific Program. He has previously worked for the United Nations in a number of human rights-related roles across Asia, including as head of the human rights unit of the UN Assistance Mission in Afghanistan between 2004 and 2007. 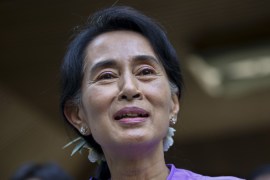