The UN Special Rapporteur on the Human Rights situation in Iran, Ahmed Shaheed, will be presenting his latest report to the UN Human Rights Council on Monday stressing that Iran has not made the required progress in implementing the recommended changes in laws and policies as identified in his previous reports.

Next Thursday, March 19, Iran will have to face the UN Human Rights Council in Geneva and either pledge commitment to benchmarks as set in the UN’s second Universal Periodic Review (UPR) or give reasons why it is foregoing its international obligations. UPR is a mechanism that offers stakeholders an opportunity to reflect on previous failures and provides a platform to explore opportunities to change the situation.

The fact that this date is only five days prior to Iran’s first nuclear agreement with the P5+1, set for 24 March, makes it particularly sensitive for Iran’s President Hassan Rouhani, who has pledged to strengthen human rights protections.

Shaheed says that the majority of Iran’s previous UPR commitments remained “unimplemented by 2014”, and that the underlying causes of violations “remain unaddressed”. Especially worrying are those “laws that restrict the press, criminalise expression, limit access to information and give rise to ongoing arrests of civil society actors and members of vulnerable groups”. He calls on the government to “end its satellite jamming” which undermines the right to information.

“Journalists arrested or prosecuted are often accused of contact with foreign media and are seemingly targeted due to their criticism of government leaders or for discussing sensitive policy issues,” Shaheed said.

The UN Special Rapporteur recommends that priority should be given to changing laws that undermine internationally recognised rights, including amending laws that violate the rights of women, undermining their full enjoyment of civil, political, social and economic rights.

“The perception was that Rouhani will improve the rights conditions,” says Shadi Sadr the executive director of Justice for Iran. “He could at least have changed some laws that are within his remit, but no such change has taken place.”

Rouhani’s presidential campaign included pledges to strengthen human rights protections for civil, political, social, cultural and economic rights, and at remedying some cases of human rights violations. Yet, all international accounts on human rights say he has not delivered.

Another highly controversial issue is that Iran's spiritual leader, Ali Khamenei, has called for measures to increase the population of Iran thereby forcing women to multiple pregnancies.

There are a few possible explanations. First, it could be that he is so focused on Iran’s nuclear talks that he has lost sight of his human rights pledges. Moreover, while facing huge confrontation from hardliners over the nuclear talks he cannot be seen to be fighting them on two fronts.

Secondly, it may be that the hardliners dominating the judiciary and security are intentionally blocking Rouhani’s attempts at changing the relevant laws.

Third, coming from such a strongly Islamist security background it was perhaps a mistake to assume Rouhani could deliver improvements in human rights.

The fourth and most likely answer is that there is now such an overriding consensus on human rights violations amongst the establishment figures in Iran that it has become the norm for reformist and hardliner alike. Thus disregard for women’s rights, minority rights, freedom of speech, association, press and political activity has become institutionalised, with solitary confinement and torture a prison norm for political activists.

The UN Rapporteur is alarmed at the “frequent application of the death penalty”. At least 753 were reportedly executed in 2014, the highest for 12 years. Especially alarming is the use of death penalty for crimes not considered “most serious” under international human rights law. He asks the authorities to “immediately nullify the death sentence against all political prisoners”, and ban the death penalty.

“My biggest concern is that Iran’s official statistics show the highest figures in 10 years for early marriages,” says Shadi Sadr. “We don’t know why but we can see that no action has been taken by the government to reverse this trend despite our damning report.”

Another highly controversial issue is that Iran’s spiritual leader, Ali Khamenei, has called for measures to increase the population of Iran thereby forcing women to multiple pregnancies.

“This would reduce Iranian women to baby making machines,” many tweeted.

Amnesty International said the proposals are also in stark contrast with promises by Rouhani for gender equality and warned they would add to “the catalogue of discriminations” against women.

Religious and ethnic minorities also continue to face violations of their rights, both in law and policy. Members of the Bahai faith are systematically deprived of the rights to university education, state employment and business licenses, and to hold religious gatherings.

The subject of Iran’s human rights violations has never been part of the nuclear talks with the P5+1. The hope, however, is that in a rush to sign a deal with Iran the politically powerful international players do not forget their responsibility as members of Human Rights Council to promote and protect human rights including pressing the authorities in the Islamic Republic to ensure that the people of Iran enjoy the human rights as enshrined in the human rights treaties to which Iran is a signatory and to which all Iranians are entitled.

Dr Massoumeh Torfeh is the former director of strategic communication at the UN Assistance Mission for Afghanistan and is currently a research associate at the London School of Economics and Political Science, specialising in Iran, Afghanistan and Central Asia. 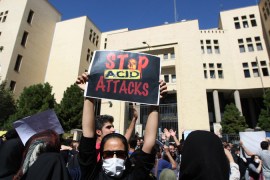 Acid attacks in Iran: A message for Rouhani?

Acid attacks are rare in Iran and if politically motivated, they could be an alarming new message to 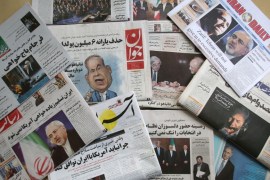