Hillary Clinton was a vision of imperious arrogance when she finally responded to the “email-gate” scandal on Tuesday. More than a week before, it had been revealed that the ex-first lady, United States senator and potential future president had been using an insecure personal email account for her term as United States secretary of state, from 2009 to 2013 – and with no independent oversight, had decided which emails were to be handed over to the public, and which would remain private. It appears she then deleted 30,000 of the  emails she had chosen not to disclose.

In a brief conference, Clinton petulantly ruled out giving independent access to her email server to check whether she hadn’t deleted messages which might be of public interest, or perhaps politically embarrassing. Instead American voters were told to take her on her word.

Particularly worrying is that as secretary of state, Clinton oversaw the Benghazi attacks, over which she is accused of either incompetence or conspiracy by Republican opponents. If her “personal” emails accidentally omitted crucial details about her role in the incident, it would be of significant political advantage.

Clinton’s email-gate is nothing exceptional. The simple courtesy of filing emails when you are in public office has escaped other Washington grandees.

“I don’t have any to turn over,” Former Secretary of State Colin Powell told a US TV show this week, speaking about the thousands of personal emails, which also went missing when he left office. In refusing to hand over any emails, Powell denied the public record any of the details of the conversations he had with foreign diplomats and leaders ahead of the Iraq war. Again, he fobbed off criticism by saying most of the letters were “benign” or unclassified. But the American people will never known if he is telling the truth.

Far from being accountable and transparent, Washington is now an illusory charade; boasting the stylings of democracy but little of the substance.

Jeb Bush, who will most likely run against Hillary Clinton for president next year, also made himself sole arbiter of which of his emails the public could read after his time as governor of Florida. After using jeb@jeb.org for both official and personal business, he handed over only emails he himself had deemed relevant.

As a local newspaper reported, “absent from the stash are emails the governor deemed not relevant to the public record”, those relating to politics, fundraising and personal matters while he was governor. Therefore, details about the highly controversial vote recount that got George W Bush, Jeb’s brother, narrowly elected in the presidential race in 2000, and which Jeb oversaw, could have easily gone missing.

Moral haughtiness from a member of the Washington elite should come as no surprise. Far from being accountable and transparent, Washington is now an illusory charade; boasting the stylings of democracy but little of the substance. Lacking in particular is accountability to all but a tiny minority of the electorate. Clinton’s treatment of her email account has done little to help the accountability deficit.

In April 2014, a study published by two academics at Princeton University analysed 1,800 different policy initiatives from 1981 to 2002, and concluded that the US was in fact more like an oligarchy, run for the benefit of the top 10 percent of earners, and a clutch of hugely influential commercial enterprises.

The study found that when economic elites supported a policy change, the new policy would have a 45 percent chance of becoming law. If they didn’t, that likelihood fell to 18 percent.

In the last presidential election, over 70 percent of party donations came from businesses. Less than 4 percent came from labour organisations.

The top 20 donors to Clinton’s senate campaigns between 1999 and 2014 are illustrative. There are just two non-commercial donors on the roster, Emily’s List – a pro-choice organisation with three million members – which aims to get female Democrats into office, and the University of California.

The rest of Clinton’s top backers are all linked to businesses – giving either via Political Action Committees (fundraising vehicles known as PACs), their employees or their employees families. Citigroup comes first with nearly $800,000, then Goldman Sachs with $700,000, DLA Piper and JP Morgan Chase with $600,000 and then Morgan Stanley with $500,000. Other names on the top 20 donor list include Merrill lynch, Credit Suisse, Time Warner and Ernst & Young.

In that context, it’s easier to see why she didn’t bother with independent oversight as to which emails should be handed over to the authorities, or believes that access to her private server shouldn’t be retrospectively granted. Transparency and accountability are merely quaint concepts demanded by inconsequential low and middle income voters.

Like any Washington politician, her real constituents are corporate lobbies and the wealthy – themselves fully accustomed to secrecy, with offshore bank accounts and commercial confidentiality agreements servicing their ambitions for total privacy.

What Clinton’s email-gate and all its similar precedents together demonstrate are the perils of letting a bastardised pseudo-democracy thrive, which forgets about voters, and responds only to its donors.

The unerring confidence with which American political elites, at the very highest levels, now believe themselves exempt from even the most basic of accountability measures – filing their emails, may seem trivial – but smacks again and again of arrogance and complacency. Voters can moan and moan, but until they start writing the cheques – Washington knows they needn’t listen. 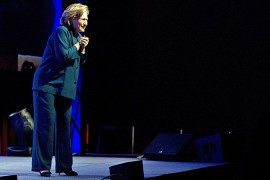 Former US secretary of state ducks black and orange shoe hurled at her while delivering keynote speech. 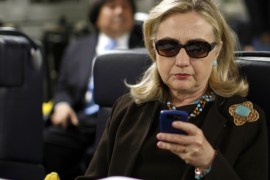