A former US State Department official wrote several weeks ago: “Observing events in Libya since the revolution has often been like watching someone set his dining room table while the house is on fire.”

The reality is, it is not just Libya’s house that’s on fire, but the whole neighbourhood, while everyone idly looks on.

A glance through any day’s newspaper clearly reveals that we are witnessing a new period in the history of the Middle East and North Africa, a period in which old structures are being threatened, dismantled, and replaced, often with more chaotic and fragmented ones. Multiple and conflicting groups vie for power and struggle to impose their own ideological and religious convictions on others.

The time of stability at the cost of freedom and democracy are over in too many parts of the region, replaced with neither security nor stability, but rather with upheaval and uncertainty. We see fires spreading and encircling a very fragile region, from Algeria and Libya in North Africa, to Syria and Iraq, in the Middle East, to Yemen in the Arabian Peninsula. The entire Arab neighbourhood could soon singe with similar violent change.

Something was not right

There is nothing surprising about this situation in principle of course; anyone who had been watching the Arab world for the past 50 or so years could sense that something was not right long before the “Arab Spring”, and that things were heading for a sociopolitical explosion of one sort or another.

The region has experienced profound social and economic change in the past four or five decades, yet its political systems and governance structures, and in some cases, even the individuals in power, remained the same. This abnormal situation became bent beyond its limits, and snapped. Like stretching a rubber band too tightly, something had to give.

History shows clearly that social and economic change must always lead to a change and reformation among the power dynamics in a society. The only real issue is whether it should be left to evolve naturally over time, or ignore them and wait for the social dynamics to explode and force relief from the pressure of accumulated frustrations, almost always as violent explosions erupting on the scene, as has been the case in the Arab world over the past 50 years.

As the region continues to experience such convulsions and “revolutions”, and direct challenges to the notion of the nation-state, the Arab countries, along with the Old World powers that tolerated and appeased the situation for decades, appear to be scratching their heads dumbfounded. They seem to be caught completely unprepared and unable to formulate a strategy to deal with the ever-growing current of change, and wondering what if anything can be done to stop it.

Since the uprising that triggered the Libyan civil war, the country has become the poster child of the failures and missed opportunities of the 'Arab Spring' and the impotence of both the international community at large and the Arab world, despite uniting for ostensibly the same objectives.

Over the past four years, since the uprising that triggered the Libyan civil war, the country has become the poster child of the failures and missed opportunities of the “Arab Spring” and the impotence of both the international community at large and the Arab world, despite uniting for ostensibly the same objectives.

To add to the utter failure, this was also one of the very few countries in the world that did not have any measurable sectarian, religious, or ethnic divisions in a relatively small population, with enough cash reserves and oil and gas deposits, which should have been more than enough to give the country a fresh start without relying on international financial charity.

Let Libya be a lesson

Here is a country that in 2011 was the focus of international and Arab attention, and even unanimity. The UN and Arab league unanimously supported resolutions to intervene to support those revolting against the Gaddafi regime, NATO, and Arab military forces actively engaged on one side of the conflict to the cheer and welcome of many Libyans. The security interests of European countries, the Arab world, and Africa all converged and aligned with those of the Libyans themselves.

Yet, here we are, four years later, with a complete debacle that has left the country torn apart by hundreds of armed groups, ranging from criminal drug traffickers and tribal warlords to extremist ideological mass murderers, using “shock and awe”, like ISIL.

As the possibility of failing among the already fragile states in the Arab world rises, the world and the region must develop a credible and coherent strategy to stop, or at least slow down, that process from claiming more countries, and manage those that have already failed and are threatening their neighbours and international peace.

There is a real pressing and urgent need now, not tomorrow, to re-engage in Libya through a coherent strategy that combines diplomacy, economic development, national reconciliation, and military intervention, which should be carried out by the international community, the Arab league, the African Union, and a new, capable, and credible Libyan leadership. This is crucial – if not for the sake of Libya itself, then for the sake of a region that is failing wholesale.

Finally, Libya has become a litmus test for the potency of the international community and US leadership in the region, given that it is a rare example of international unanimity and collective will. The catastrophic failure of Libya, a relatively small, uncomplicated country, gives rise to a global impression that: “If we can’t get even Libya right, after all that we should have learned in Somalia, Afghanistan, Iraq, and Syria, what chances do we have in other more complex countries and situations?”

Hafed al-Ghwell is a senior non-resident Fellow with the Rafik Hariri Center at the Atlantic Council in Washington DC and former adviser to the Dean of the Board of Executive Directors of the World Bank Group. 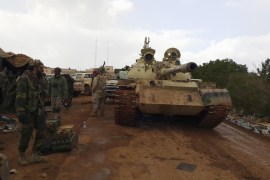 As Libya talks progress, no one can tell who holds real authority.

The rise and rise of Libya’s rogue general