In the summer of 1977, Egyptian and Libyan forces clashed along their border in a series of cross-border raids, tank battles, and bombing runs. On that occasion, Egypt bombed and strafed Libyan targets near the eastern city of Tobruk, killing several Soviet personnel in the process. Forty years on, Egypt finds itself intervening in its neighbour’s affairs once again – but this time, on the side of Libya’s government-in-exile, based in Tobruk, the very city it once pounded from the skies.

This is Egypt’s first publicly avowed overseas military operation since its participation, as the second largest contingent behind the US, in the first Gulf war against Saddam Hussein’s Iraq over two decades ago.

It represents part of a broadening international front in an Egyptian – and Arab – war against political Islam, the flipside of Egypt’s decisive authoritarian turn at home. Moreover, both Egypt’s involvement and the growth of a sophisticated ISIL bridgehead in Libya portend the further internationalisation of a civil war that has torn the country asunder.

On news of ISIL’s beheading of 21 Egyptian Coptic Christians in Libya, Egypt promised to “avenge the bloodshed and to seek retribution”. It did so swiftly, with a series of eight air strikes that killed a reported 40 to 50 people near the city of Derna, the stronghold of ISIL and affiliated groups.

The precise relationship between ISIL’s affiliates in Derna and those elsewhere, who conducted the abduction and murder, is unclear. What is clear is that ISIL’s presence in eastern Libya has grown throughout the past year.

Its numbers swelled by arrivals from Iraq and Syria in Spring 2014, spurred on by the establishment of ISIL’s caliphate last summer, and marked by a bloody assault on Tripoli’s Corinthia Hotel in January. But for Egypt, ISIL is only the more extreme end of what they see as a threatening wave of political Islam across the region, part of the same movement that took democratic power in Cairo in 2012 and was toppled, in a coup, the following year.

Cairo has therefore thrown its weight behind Libya’s internationally recognised government-in-exile in Tobruk, as well as an independent-minded Gaddafi-era general, Khalifa Haftar, who has led a war (Operation Dignity) against the Islamist-led coalition which controls Tripoli (Libya Dawn).

Powerful tribal militias sit on both sides of the divide. The government portrays all its opponents as extremists, while Libya Dawn sees the government as agents of the pre-revolutionary ancien regime. Haftar himself is a Sisi-like figure who, in a recent New Yorker interview, smilingly suggested he would be open to the presidency if the people so demanded.

Amid these complex divisions, Egypt and the United Arab Emirates (UAE) have forcefully chosen one side. Both governments view political Islam in general, and the Muslim Brotherhood in particular, in exceptionally hostile terms, and view Libya’s Islamists as part of that regional ideological, political, and military threat.

Egypt and the United Arab Emirates (UAE) have forcefully chosen one side. Both governments view political Islam in general, and the Muslim Brotherhood in particular, in exceptionally hostile terms, and view Libya's Islamists as part of that regional ideological, political, and military threat.

Last year they conducted undeclared air strikes and raids in Tripoli and Misrata in August, beyond the range of the Libyan government’s own aircraft, and then again in Benghazi in October. These were largely ineffective, and irked the US.

But Egypt framed them as an extension of its domestic campaign against all those – both moderate and extreme – painted as “terrorists”. Last year’s campaign also reflected broader international divisions, with Qatar – at the time, locked in a bitter rivalry with Egypt, the UAE, and some Arab monarchies – hosting key Libyan Islamists.

ISIL is a serious threat to Cairo, but in one sense it is also an opportunity. This week’s strikes are likely to lend international legitimacy to Egypt’s Libya policy by associating its broad support for the Tobruk government and Haftar with its specific actions against ISIL.

Egypt is better placed to persuade the international community that it is doing no more than fighting terrorism in the same way that the US-led pan-Arab and European coalition is doing in Syria and Iraq.

It will also be easier to persuade western governments that the only way to defeat ISIL in Libya is to support Tobruk, even though experts like Frederic Wehrey have warned that Egypt’s heavy-handed policy in Libya risks undermining peace talks and, as within Egypt, creating “new reservoirs of extremism”.

Yet, Cairo has already secured French support in the UN Security Council for “new measures” on Libya.

More broadly, are we looking at a new era of Egyptian regional activism? Egypt has aggressively sought to give the impression that it is diversifying diplomatic and military partners away from the US, which is Egypt’s largest supplier – though it briefly suspended aid after 2013’s coup.

These deals do little to augment Egypt’s military against realistic threats, but they do signal Cairo’s willingness to act forcefully and even independently of western allies. Egypt now seems likely to conduct further air strikes in Libya, and will do so with considerable international sympathy. The question is whether it will exploit this opportunity to target a much broader set of its enemies in Libya.

Shashank Joshi is a research fellow of the Royal United Services Institute in London. He specialises in the international politics of South Asia and the Middle East. 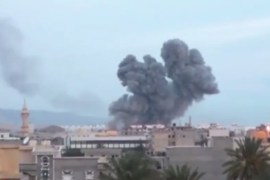