When terrorist groups like ISIL conduct brutal executions it makes headline news around the world. When an American killed three fellow Americans, the story was practically buried in the US, ironically in a 24-hour news cycle that is often desperate for news. Deah Barakat, his wife Yusor Abu-Salha, and her sister Razan Abu-Salha were murdered before any of them had reached the age of 25. America did not just lose three Muslims this week. It lost three ambassadors of a new generation of Muslim-Americans trying to make a difference in their communities.

My family knew the young victims of this attack in North Carolina. We shared friends among the northern California Muslim-American community I grew up in. Deah, Yusor and Razan represented a new generation in the Muslim-American community that took decades in the making. We constitute a generation, who for the most part, are the children of Muslims who formed the brain drain trend, when American visas were given out eagerly to professionals from the Muslim world in the 1960s and 1970s, or other Muslims who came over with nothing and made a life for themselves and their families. Our parents told us to pursue the professions or careers that carried prestige back in the Middle East and Islamic world: medicine, engineering, or law.

Working with computers in Silicon Valley was fine since it generated a hefty paycheck. Our parents told our generation any work in the humanities, arts, social or public policy was a waste of time and a distraction. Our trajectory was set by their sacrifices. They worked to raise us in the United States so we could have the opportunity to pursue professional degrees, earn money, marry, and buy a home in suburbia. The American dream.

What characterised my generation of Muslim Americans coming of age right before or after 9/11 was that we diversified our pursuits. Some, like myself went into academia, others became writers, or comedians, while others, like Deah and Yusor sought to pursue time-intensive medical degrees, and yet still devoted their skills and free time to social work and community engagement, such as feeding the homeless in Raleigh, North Carolina.

Razan, Yusor’s sister, was about to begin her university career studying architecture combined with environmental design. Deah, Razan, and Yusor were denied an opportunity to continue this saga of post-9/11 generation of Muslim Americans who were committed to civic commitment. And the news media in the US would have neglected their desires had it not been for hashtag activism asking why these victims were not getting any media attention.

And still their deaths have been shrugged off as a mere “parking dispute”, suggesting that the murders were part of a road rage incident gone out of control (which this New Yorker article reminds us has equally chilling implications of how the US has become numb to murder).

Unfortunately, Muslim Americans tend to be newsworthy when implicated in acts of terrorism. Muslim Americans such as Nidal Hasan, the perpetrator of the Ft Hood massacre, Anwar al-Awlaki, of al-Qaeda in the Arabian Peninsula, Faisal Shazad, the “Times Square bomber”, and the Boston Marathon bombers not only garnered significant media coverage during the 24-hour news cycle, but channels like Fox News and its invited pundits repeatedly invoke them years after their terrorist plots as examples to remind Muslim Americans that we do not fit into an America based on a Judeo-Christian legacy.

We constitute a generation, who for the most part, are the children of Muslims who formed the brain drain trend, when American visas were given out eagerly to professionals from the Muslim world in the 1960s and 1970s, or other Muslims who came over with nothing and made a life for themselves and their families.

American converts to Islam, when linked to terrorism, also fit this media narrative of Muslim “home-grown terrorists”, such as John Walker Lindh, who volunteered to fight for the Afghan Taliban, or Adam al-Amriki, who emerged as the English spokesperson for al-Qaeda. Zachary Adam Chesser, a Muslim convert responsible for a death threat to the creators of South Park if they depicted the Prophet Muhammad in their cartoon series, received more media attention than the three innocent Muslims murdered in North Carolina.

Even Jon Stewart, an American of Jewish heritage who has become the most prominent defender of Muslim Americans during his career at the Daily Show, covered Chesser’s threats in 2010, but let me down twice this week, announcing he will no longer host the show, and failing to criticise on his February 11 show how the mainstream neglected the murder of these young Muslims.

Deah, Yusor and Razan’s deaths serve as a tragic reminder of a decade-long legacy of anti-Muslim sentiment in the US with no end in sight. In my lifetime as an Iraqi American Muslim, I would like to have experienced a period, just an interval, where the Middle East or the Islamic world was not in the news, generating negative stereotypes among Americans.

In the 1980s, when Iran was the public enemy, I faced discrimination because for the ignorant the difference between Iran and Iraq was one letter. They never learned to differentiate between the two countries. Unfortunately, the ignorant could discriminate “legitimately” against me as Iraq became public enemy from 1990 to 2003.

On some level I can empathise with how German Americans or Japanese Americans felt during World War II. However, in the case of Muslim Americans, there is no Berlin or Tokyo to surrender and declare that war is over, allowing for a “rehabilitation” of those Americans who were demonised just because of the nation that preceded their hyphen. During that conflict their ancestral homes were nation-states.

During the “war on terror”, any Muslim, from Morocco to Indonesia is subject to discrimination in the US as long as this war continues which is open-ended in nature. For that matter, even Arab Christians (technically among the first Christians in the world) suffer discrimination in the US for just being associated with the Middle East. Even with the death of Osama bin Laden, anti-Muslim discrimination persisted in this country, and the rise of ISIL and that ongoing war seems to indicate that Muslim Americans will be collateral damage for years to come.

If I can presume to speak on behalf of myself, the three victims Deah, Yusor and Razan, and all of America’s Muslims, all we seek is to achieve some level of banality in American society. Just as Italian and Irish Catholics, Chinese and Japanese Americans, Jewish, and Latino Americans were perceived as “foreign” in the fabric of American society over time, it is our turn to be the Other American.

Granted like Deah, Yusor and Razan, we want to make a difference in our communities, but our desires as Muslim Americans are banal, just as the preceding generations of immigrants to the US. We hope to pursue our passions. We want to make a living. Hopefully change some ingrained stereotypes along the way. Unfortunately all these opportunities were denied to three young Americans this week.

Ibrahim al-Marashi is an assistant professor at the Department of History, California State University, San Marcos. 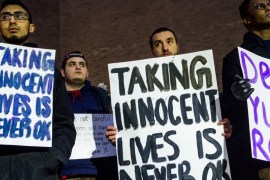