Irrespective of what rallying cries, signs or adapted hashtags proclaim, Muslim lives in America don’t matter. The aftermath of the murder of the three American students in Chapel Hill, and the broader context that spurred it, reconfirms this brutal truth.

The three victims – Deah Barakat, 23, his wife Yusor Mohammad, 21, and her sister Razan Mohammad Abu-Salha, 19, were killed at approximately 5:11pm on Tuesday. The identity of the killer, Craig Stephen Hicks, 46, was revealed roughly seven hours later.

Despite the release of these facts, and probative evidence that the executions were likely a hate crime, national media outlets remained silent. History affirms that a reversal of racial and religious identities – an Arab and Muslim culprit and white victims – would have spurred immediate media attention, on a national and global scale. However, given that Barakat and the Abu-Salha sisters were Arab and Muslim, the media lagged to cover the story.

In addition to media devaluation of Muslim lives, state-sponsored government policies targeting Muslim Americans affirm the conflation of Muslim identity with a terrorist threat. Institutional policy, in the form of state surveillance, profiling and counter-radicalisations programming, tie Muslim identity to suspicion and subversion, which emboldens the hate-fuelled violence inflicted by private citizens, like Hicks.

Between media misrepresentation and neglect, and systematic state surveillance and suppression of Muslims, the facts in the US lead to the undeniable conclusion that Muslim lives don’t matter.

It is perhaps fantasy to expect the same outlets that repeatedly misrepresent Muslims to pivot swiftly and rush to cover their victimhood. The Charlie Hebdo attack in early January, and the string of crises involving Muslim culprits before it, affirms the assessment that “Muslim lives are only newsworthy when they are behind a gun. Not in front of it”.

However, the “three victims were American citizens” sympathisers cried. Or, “upward-bound students with bright futures, and pristine records”. Two of them, Deah and Yusor, were newlyweds, only four weeks separated from their wedding. A life together, with kids and a white picket fence, was in their horizon.

Neither citizenship nor conventional measures of American achievements insulated the victims from hate. They were Muslims. That marker mattered most. Muslim identity trumped, and very likely for Hicks, eclipsed the three victims’ American-ness.

Their religion mattered most for US media outlets as well, who lagged to cover the story ... leaving Muslims to wonder: if the victims were white and non-Muslims, and the culprit Muslim, would mainstream media outlets be so slow to respond and report?

Their religion mattered most for US media outlets as well, who lagged to cover the story.

CNN, Fox News, and MSNBC finally released stories of the murders Wednesday morning: More than 12 hours after the three young adults’ lives were taken leaving Muslims to wonder: If the victims were white and non-Muslims, and the culprit Muslim, would mainstream media outlets be so slow to respond and report?

No. Muslims lives only matter when they’re villains. Not victims. This is reaffirmed by news story after news story, and distorted accounts that tab “parking disputes” instead of hate as the primary motives of murder.

State-run programming targeting Muslims marks members of that demographic as presumptively suspicious. NSA surveillance and counter-extremism programming, PATRIOT and Suspicious Activity Reporting strategies, are shaped within government walls. But these policies also shape stereotypes and spur violence far beyond them.

This comprehensive programming, which is both synchronised and expanding, is built upon age-old perceptions of Muslims as “enemy combatants”, “national security risks”, and “unassimilable”.

Past laws that restricted the naturalisation of Muslims were built upon racist and Orientalist tropes. However, state policies that profile and persecute today are still based on these very baselines.

It would be a misnomer to single out anti-Muslim laws and policies as spurring Islamophobic and anti-Arab culture. Rather, it pronounces this already existing psychosis, which is magnified by slanted news coverage and cinematic misrepresentations, illustrated vividly in films such as American Sniper.

However, these laws and programmes are not the products of a Hollywood studio. Nor are they delivered by a CNN or Fox News anchor. They are shaped and enacted by statesman within the hollowed halls of government. Affixing per se vilification of “Muslim Americans” with the state seal of approval that stirs Islamophobia on the ground, and spurs unspeakable violence atop it.

From the vantage point of the state, Muslims lives matter when they are subjects of surveillance, or targets of counter-extremism; not direct, or indirect, victims of these policies.

The Campaign to TAKE ON HATE, led by the National Network for Arab American Communities, a project of ACCESS, has been working with communities across the country to organise prayer vigils, lead educational workshops, and organise within the very communities where Arab and Muslim Americans are at greatest risk.

From California to New York, Michigan to Florida, citizens are coming together with their local communities to not only mourn the lives tragically lost on Tuesday, but to coordinate plans to counter government profiling, private discrimination and violence, and their nefarious intersection.

If halls of American power echo, time and again, that Muslim lives don’t matter, the strongest rebuttal must come from Muslim Americans themselves. A rebuttal that goes beyond rallying cries, signs and hashtags. And proclaimed through sustained action, and en mass mobilisation against halls of power that systematically strip Muslims lives of value.

Nadia El-Zein Tonova is director of the National Network of Arab American Communities, and the Take On Hate Initiative. 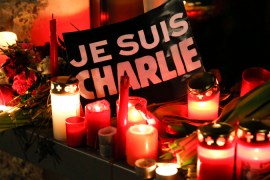