When Russian, Ukrainian, German and French leaders reconvene in Minsk to seek a lasting ceasefire for Eastern Ukraine, the difficult truth they will face is this; Ukraine is only the beginning. Europe and Russia have been on a geopolitical collision course for years. And the only way for Europe to survive this standoff is to change Russia itself.

To see why, let’s try a thought experiment. Can Europe be prosperous and secure for the foreseeable future if China is governed the way it is today? China is an authoritarian country that represses its citizens and bullies its neighbours, similar to Russia in many ways.

And yet China poses no real challenge to European prosperity and security. We have tools of both persuasion and coercion to deal with the threats emanating from Beijing. But we also have the understanding that, as a major trading power well integrated into global markets, China prospers when we do.

While corrupt and tyrannical at home, the People’s Republic depends for its livelihood on the strength of the western institutions that underpin mutually beneficial transactions: good governance, rule of law, and property rights. While they may not want to see our institutions expand, China has no interest in seeing them fail.

Unfortunately, the same cannot be said for Russia, which generates profits on a very different model. In a land where efficiency is hard to come by, the rich have learned to profit from inefficiency.

Even Russia’s most profitable resource exporters are notoriously inefficient, as is the economy as a whole. The result is that the majority of Russia’s super-rich – whether the oligarchs or the bureaucrats, about whose Swiss bank accounts we read just recently in the HSBC leaks – are not value-creators on the Chinese model, but are simply rent-seekers.

Having staked out profitable ground in Russia’s political-economic landscape, where the fusion of power and money would make the US’ Koch brothers blush, they generate wealth for themselves by bleeding it out of state budgets, corporate balance sheets and consumers’ pockets.

Rent-seeking on that scale requires a system in which those at the top are unaccountable to voters, regulators, and shareholders. While our own institutions are far from perfect, our economics and politics are built on a very different logic, one in which we strive for more accountability, not less, and seek to root out inefficiencies, rather than to profit from them. And that is why Russia went to war to keep Ukraine out of the European economic space; wherever European rules prevail, rent-seekers will fail to compete.

If the source of the conflict is the incompatibility of the Russian and European systems, then the only way out is for one side to become more like the other.

While crony capitalism has its proponents in the West, promising to make Europe more like Russia won’t win many elections. But the West has been singularly bad at producing political and economic transformation in the former Soviet Union. Can we do better this time?

The solution is to abandon the old tactic of picking winners – backing would-be reformers who inevitably disappoint – and to start picking based on behaviour.

While the Russian and European systems cannot coexist in one space, the reality is that Russia’s system depends on Europe’s for its survival. The same institutional weaknesses that make Russia a great place to accumulate assets make it a very bad place to protect them.

But because building the rule of law in Russia would put an end to rent-seeking, the super-rich have found it more profitable to engage in a bit of “jurisdictional arbitrage”, earning their money in Russia and protecting it in Europe. Thus, in a perverse way, the strength of Europe’s institutions – its laws and courts, its banks and markets – has allowed Russia’s crony capitalists to undermine their own institutions at home.

It does not have to be this way. When Merkel and Hollande get back from Minsk, hopefully with a peace deal in hand, they should go to Brussels and start working on regulations. They should push through rules, such as the EU’s Fourth Money Laundering Directive, that would identify the beneficial owners of all major assets, tracing the origin and destination of the money flowing in and out of capital markets, real estate, holding companies and so on.

Passing these rules and then investing in their enforcement would be a good first step towards ensuring that, in order to be protected by European laws, Russian assets have to be earned by European rules.

Once the fighting in Ukraine subsides, whatever the terms of settlement might be, the conflict between Russia and Europe will continue. The message to Moscow, and to governments in the eastern neighbourhood, should be clear; Europe believes in its institutions, is prepared to defend them, seeks to extend them, and will not allow them to be used by those who would seek to undermine them.

Samuel A Greene is director of the Russia Institute at King’s College London and author of Moscow in Movement: Power & Opposition in Putin’s Russia. 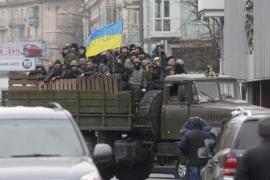 Russia in a corner over Ukraine

What can President Vladimir Putin do about Ukraine? Not very much at the moment. 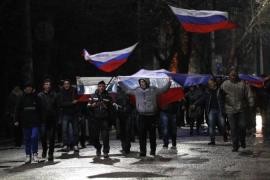 Don’t mess with Russia over Ukraine?

Ukraine’s unity is at stake as Russia resists the country’s drift towards the West.

The UK government is on the wrong side of history… again