This past year has been particularly challenging not only for China, but for its national image as a land of inexorable progress and dynamic leadership. While 2008 witnessed a great global economic disruption, which shattered a long-standing belief in the “American dream” and the viability of the Anglo-Saxon model of capitalism, this year arguably presented a direct challenge to the Chinese model of governance.

Only a few years into office, the leadership of President Xi Jinping, who has presented himself as harbinger of an era of progress under the banner of “China dream“, has been seriously tested.

He couldn’t have set the bar of expectations any higher. Soon the charismatic Chinese leader – with his perfectly combed hair, nonchalant smile, and dramatic crackdown on corruption – was able to establish a cult of personality among large sections of the Chinese population, with foreign observers describing him as the most powerful and capable leader in decades.

However, a quarter of his the way into his tenure – which is expected to come to an end in 2022 – Xi is grappling with the slowest economic growth since the opening of China under Deng Xiaoping, a mounting international backlash over China’s maritime assertiveness in East Asia, and a gargantuan environmental crisis. Both at home and abroad, Xi’s judgment and dexterity are being tested.

There is little doubt as to the mind-boggling economic success of the Middle Kingdom in recent memory. As Asia experts such as Kishore Mahbubani have pointed out, it took the Great Britain and the United States more than half a century to double their per capita income, but astonishingly China was able to achieve a similar feat in a decade.

More than declining confidence in China's economic prospects and its unsustainable model of development, many neighbouring countries have also come to resent, hedge against, and even openly criticise its territorial assertiveness in adjacent waters.

As a testament to the dynamism of its leadership, China was not only able to successfully replicate and adapt the developmental models of industrialised Asian countries such as Japan, South Korea and Taiwan, but it was also able to achieve it on a larger scale with far greater consequence for the global economy.

Since the advent of the Great Recession in 2008, as Harvard academic Graham Allison points out, China has been effectively the engine of global economic recovery.

Today, the Asian powerhouse is a fully fledged, upper-middle-income country, like Turkey and Malaysia, with Beijing hoping to establish a wealthy “socialist country” by 2049, the centenary of the ruling party’s establishment. In terms of human development, China – along with Singapore, Iran and Rwanda – has been among the world’s most improved nations in recent decades.

After a long period of almost uninterrupted growth, however, China’s double-digit growth rates are giving way to a new normal of moderate growth. This year, Beijing has been desperate to achieve a seven percent growth rate, which if achieved would still represent the slowest in 25 years.

China’s economic slowdown is sending shockwaves across the global economy. Nothing has underscored the centrality of China to the global economy more than the near-collapse of commodity prices and the near-bankruptcy of many resource-exporting countries, which had come to depend on Chinese demand.

OPINION: China to open its first naval base in Africa

Not long ago, Beijing’s propagandists such as Eric Li were confidently promoting China’s supposed meritocratic and competent leadership, contrasting it with the dysfunctional politics across much of the democratic world. But the myth of a nimble Chinese leadership is coming under question.

Many people, including Chinese citizens, were disappointed by the government’s wobbly response earlier this year, when China suffered a series of stock market reversals amid a mishandled phase of market liberalization.

Many citizens lamented the conspicuous silence of Xi during the market upheavals. And similar sentiments of anger and despair were aired when the industrial hub of Tianjin fell victim to a monstrous explosion, which revealed the frightening extent of regulatory deficit and corruption in the state institutions.

No wonder then that Xi was desperate to regain public confidence and cash in on a carefully choreographed grand military parade to mark the defeat of Imperial Japan seven decades ago.

But Xi is also grappling with a worsening environmental crisis, with the government recently announcing its second “red alert” warning as smog engulfed Beijing and other cities. Despite pouring billions of dollars into a media blitzkrieg and advocating major infrastructure investment initiatives across Asia and beyond, China’s image has taken a hit across the world.

More than declining confidence in China’s economic prospects and its unsustainable model of development, many neighbouring countries have also come to resent, hedge against, and even openly criticise its territorial assertiveness in adjacent waters.

In the South China Sea, in particular, the Philippines has taken China to court for allegedly violating international law, while the US and its allies such as Australia and Japan are deploying military assets to directly challenge China’s territorial claims and reclamation activities in the area.

Like never before, the so-called China model of development, a supposedly successful cocktail of state capitalism and single-party rule, is coming under scrutiny, given the myriad of environmental, socio-political, and economic challenges faced by the country. It remains to be seen whether Xi will make necessary recalibrations and policy reforms in the coming year. 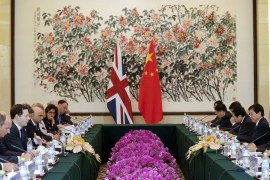 Xi Jinping’s state visit to the UK next week is an important statement about global trends and subtle diplomacy. 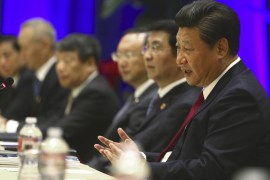