In a recent interview with the Spanish newspaper La Vanguardia, Spain’s interior minister and candidate for Congress Jorge Fernandez Diaz revealed that he possesses his very own guardian angel named Marcelo, who helps him with tasks such as parking the car. Coming from a man who awards national policing medals to statues of the Virgin Mary, such expressions of faith are not enormously surprising.

As Spain heads to vote in general elections on December 20, it remains to be seen whether Marcelo’s services also extend to the ballot box. Various polls have put the right-wing People’s Party (PP) – the domain of Fernandez Diaz and Prime Minister Mariano Rajoy – in the lead, but these aren’t your run-of-the-mill Spanish elections.

The traditional showdown between the PP and the Socialist Party (PSOE), the two entities that have dominated Spain’s political scene in the post-Franco era, has been expanded to include two additional contenders for a substantial piece of the pie: the right-wing Ciudadanos Party and the left-wing Podemos (meaning “we can” in Spanish).

The latter materialised just last year and rapidly accrued a widespread following with its anti-austerity, pro-transparency message – one that resonated with sectors of the population devastated by the financial crisis.

Much of the devastation was a result of the fact that, in exemplary neoliberal fashion, the Spanish powers that be had shunted blame for the crisis onto the lower echelons of society, slashing education, healthcare, and other necessities and evicting people en masse from their homes. Meanwhile, those same powers continued to indulge in the privileges of institutional corruption.

Spain is now “more changeable than ever”, Catalan architect David Bravo – a member of Barcelona’s progressive political scene – told me. Unfortunately, Bravo noted, Podemos also has changed, backtracking from some of its original proposals and disillusioning certain supporters on the left.

One big issue is basic income, which Podemos initially helped to popularise in Spain. Although the logistics and financing methods of a basic income can vary internationally, the gist of the concept is this: Every citizen or resident of a society is provided with regular and unconditional payments from the state, regardless of his or her living arrangements and other sources of income.

In the case of Spain, basic income could be easily financed by reforming the Spanish income tax in such a way as to redistribute the wealth of Spain’s richest 20 percent to the rest of the population, says economist Daniel Raventos, a lecturer at the University of Barcelona and the author of Basic Income: The Material Conditions of Freedom.

In a personal correspondence, Raventos explained that each person – the rich included – would receive an annual basic income of more than $8,000, putting everyone above the poverty threshold. Minors would receive one fifth of the amount.

Far from a substitute for the welfare state, the plan would simply eliminate welfare benefits and subsidies of a sum lower than the income itself (as well as attendant administrative costs), while leaving all social services intact.

The potential benefits of a basic income are numerous, ranging from a decrease in social inequality to an eventual dismantling, perhaps, of the notion that housework – assigned disproportionately to women – is not real work and is thus undeserving of financial sponsorship.

Something to vote for

In her book The Human Rights Manifesto, Julie Wark notes additional perks of basic income in general, presented here as a universal right: “[W]orkers would gain bargaining power vis-a-vis the employer since the financial security held out by a guaranteed basic income could lessen the pressure on workers to accept jobs under more or less abusive conditions.”

Which brings us to the convenient rumour, propagated by basic income’s detractors, that the initiative would trigger a mass abandonment of the workplace. But as Raventos emphasised to me, a recent public opinion survey in Catalonia showed that only 2.9 percent of working people interviewed would leave their jobs in the event of an implementation of basic income, while only 2.2 percent of unemployed people would cease their job searches.

Indeed, a recent article on Finland’s own plans for a national basic income specifies that “the proposal is meant to tackle unemployment”, with this rationale:

“… [A] basic income would allow people to take on low-paying jobs without personal cost. At the moment, a temporary job results in lower welfare benefits, which can lead to an overall drop in income.”

And it’s not only Europe. As Raventos and Wark have documented, basic income experiments from Alaska to Namibia have yielded impressive results.

Why, then, has basic income been renounced by Podemos, a party ostensibly in the business of challenging the status quo? We’re led to believe that the concept is just too radical for the present moment – and especially in the run-up to elections.

But the only thing radical about the arrangement, in fact, is that it doesn’t prostrate itself before elite interests. Instead, it aims to ameliorate the hardship of existence for a majority of the Spanish populace, at the expense of the rich.

Now that really would have been something to vote for. 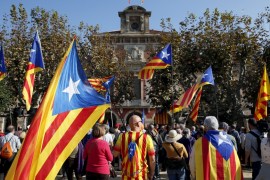 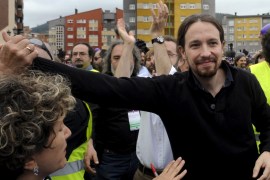