You know what a good reaction to fear and tragedy and terror would be? A kneejerk response. That must be right, because how else can you explain the rationale guiding UK Prime Minister David Cameron who, following ISIL-claimed terror atrocities in Paris, so soon after atrocities in Beirut, the Egyptian Sinai, in Ankara and on Tunisia’s beaches, now wants Britain to join the bombing efforts in Syria.

Last week in parliament, Cameron presented his case for launching air strikes against the death cult ISIL in Syria: to degrade the group, to show unity with France, to help the war-ravaged Syrian people and protect Britain from the terror threat posed by ISIL.

The issue will be put to a vote within days – but it isn’t just the hastiness that is so troubling. It’s the idea that, after similarly ill-conceived military action in Iraq, Afghanistan and then Libya over the past 12 years, each with its own hellish consequences, we would take military action in Syria and expect a different outcome.

‘Who are the moderates?’

Still, we are told that Britain must join the bombing campaign, even though past bombing campaigns only made terror worse, just as security officials warned would be the case, and nobody can explain why this time will be any different.

There’s no appetite for sending in ground troops, which stand a better chance of fighting ISIL, but the bombing advocates say there are actually 70,000 Syrian opposition “moderates” who can take on the task.

Who are these “moderates”? Conservative politicians talk vaguely of Free Syrian Army factions and assure that the Joint Intelligence Committee has identified and approved the groups making up the number.

So that’s OK, right? Because what could possibly go wrong with trusting a disparate, rapidly shifting, factional, often divided and sometimes sectarian assortment of groups on the ground with this critical role?

Meanwhile, analysts have been pushing the idea that al-Qaeda-linked groups in Syria, such as Ahrar al-Sham and Jabhat al-Nusra, with whom some of the “moderates” have sometimes formed strategic alliances, are somehow reformed, credible and could be part of the solution.

Meanwhile, last week’s UNSC resolution, committing member nations to “all necessary measures” to tackle ISIL, raised several possibilities for doing so. Among them was cutting off funding sources for ISIL, as well as sealing borders used by the group and also sharing intelligence. ISIL is thought to be making over $1m a day by selling oil smuggled across Turkey’s borders.

Even if we generously accept that the Turkish government, as it claims, cannot control this flow, why not engage in helping them put a stop to it?

And if it is genuinely a struggle (as opposed to just reluctance) for Turkey to stop ISIL fighters using its long land border to move fighters and weapons, then maybe Britain could assist with that? The air strikes advocates aren’t even trying to explain why these are not better options. Instead, we are told there are no alternatives: it’s do bombing, or shamefully do nothing to tackle the murderous ISIL group.

Having watched military interventions with no planning for the aftermath send Afghanistan, Iraq and then Libya spiralling miserably into chaos, Britain’s bombing advocates have little to say on the consequences of UK attacks in Syria.

How will air strikes dislodge ISIL and not kill civilians in Raqqa? The group, scattered and mobile within a civilian population, can’t be effectively targeted from the air – and Raqqa’s displaced residents are asking Britain not to drop bombs on the city, because of the feared consequences for its inhabitants.

Even assuming that UK air strikes actually dislodge the death cult from Raqqa, how is the city then secured? By which group on the ground? What’s to stop organised and armed jihadists taking over? Terrifyingly, there are no real answers to any of these questions.

Meanwhile, in a civil war that became a proxy war – fought using Syrian blood, Syrian lives – military escalation brings its own momentum, as each power does what it takes to secure its own proxy and interests. Given this deadly, cynical dimension, there is no logic in bringing yet another country’s firepower into the fray, especially as its likely to push a political solution to this nightmarish war even further away.

Negotiations were finally starting to gain a bit of traction in Vienna recently – in part because Iran, which backs Syria’s deadly ruler Bashar al-Assad, is now crucially taking part in the talks.

But the ugly truth is that the powers involved still want to protect their own interests more than they want peace for the Syrian people. If there’s a role for the UK here, it is in persuading its allies to change their priorities.

In Britain, Cameron, having lost a vote on air strikes against Assad in 2013, was unwilling to call for a vote on bombing ISIL unless he could be confident of a win (some of his own party oppose air strikes). That now looks more likely, as the opposition Labour party has decided to give its MPs a free vote on the issue. While Labour leader Jeremy Corbyn opposes air strikes, a position in line with the party membership, much of his shadow cabinet disagrees – which meant that, ultimately, the leader couldn’t make opposition to bombing the party position.

There should at least be a longer debate on the issue, but instead, it looks like there’s going to be a vote on Wednesday, for Britain to bomb another country, for ill-conceived reasons and without proper pause to consider the reasons. It’s a mess of a way to make any military decision. And yet here we are, doing just that. Again. 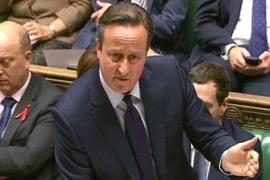