The controversy in response to the death of Master Sergeant Joshua L Wheeler in Iraq, the first American to die in “Operation: Inherent Resolve” against the Islamic State of Iraq and the Levant (ISIL), highlights the paradox of how Washington sees the fight as important enough to kill for but not to die for.

This is the concept of “bloodless war” that has been embraced by the US and European leaders towards the fight against ISIL. A massive disconnect has developed between the rhetoric used against ISIL and the reality of what kinds of risk and strategic investment that powers are willing to put into the fight.

This tactic, a legacy of long wars in Iraq and Afghanistan eroding the base of public opinion, handicaps any strategy development and results in continually failing attempts to build local and national forces who are expected to do the dying.

Following accusations of mission creep after Wheeler’s death, Pentagon spokesman Peter Cook clarified that “US forces are not in an active combat mission in Iraq,” and Lieutenant General Sean MacFarland, the commander of the US effort in Iraq, issued a statement that the mission “does not represent a change in our policy. US forces are not in Iraq on a combat mission and do not have boots on the ground”.

The US has been at war for two out of every three years since 1989, and a war weariness, particularly when it comes to the Middle East, has defined the Obama presidency as opposed to his predecessor, George W Bush’s term.

Bush invested heavily in the use of US military power in the Middle East justified by strategic and moral imperatives, regularly invoking broader principles to legitimate his actions. Statements such as: “Evil is real, and it must be opposed,” became commonplace.

According to research done by Peter Singer, Bush used the word ‘evil’ over 1,000 times in his speeches between his inauguration and June 2003.

By contrast, Obama is the president who took the US out of Iraq (although they are now essentially back in) and tried to take them out of Afghanistan, a plan thwarted by the resurgent Taliban.

Supporters of Obama praise his pragmatic realism in contrast to his predecessor’s ideological zeal. Critics would argue that Obama has overseen a uninterested and irresponsible policy towards the seismic events of the Arab Spring and subsequent conflicts in Libya, Yemen, Iraq, and Syria in particular.

Ian Bremmer of the Eurasia Group think-tank, slammed Obama’s foreign policy in his new book “Superpower”, describing the president as drifting from crisis to crisis abroad, bereft of any real strategy, and simply reacting to events.

Obama alone cannot be blamed for a change in global power dynamics that have bled power away from what seemed after the Cold War to be a US hegemon. Indeed, there has been a steady growth in the power of asymmetry in the wars from 1950 to 1998, wherein “the weak side prevailed more often: 55 percent of the time” according to Moises Naim in his book The End of Power.

Change in the strategic equation

While Obama has been unwilling to invest blood in the war against ISIL, he has invested treasure with the campaign costing $10m a day to date and there is no greater symbol of the arms-length management of the campaign against ISIL than the now ubiquitous unmanned armed drones that hunt the skies above Iraq and Syria.

Things may be about to change in the strategic equation as seen by Washington and interestingly enough it looks like its Russian, not ISIL, activity that may see the US up its stakes and put its soldiers in harm’s way again in the Middle East.

Following Moscow’s decision to open a new aerial campaign up against Syrian opposition groups, the US and Saudi Arabia have dramatically responded by agreeing to boost their own military and diplomatic support for the Syrian rebels.

What is more dramatic is US Defence Secretary Ash Carter’s suggestion that that US ground forces will see more combat and “direct action” in Iraq.

It would appear that Obama is willing to lose soldiers in order to counterbalance Russia’s strategic land grab in Iraq rather than in response to the threat of ISIL. This is unlikely to be anything as dramatic as Russia’s escalation, but rather could see US Special Forces far closer to the action than before, with increased risk of death or injury.

Also read: How evil is ISIL?

If the fight against ISIL is a challenge of a generation, as it is so regularly framed by political leaders, then it remains amazing to see such a continued absence of strategy coming out of Washington.

With time now ticking down until the end of the Obama presidency, his greatest legacy may be one of disengagement and detachment with a Middle East that continues to burn. 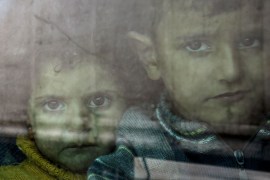