In August 2013, British Prime Minister David Cameron urged the House of Commons to consider military action in Syria in order to “alleviate human suffering” in the wake of a horrific chemical weapons attack.

“The principle of humanitarian intervention,” he noted, “provides a sound legal basis for taking action”.

He was rebuffed by the MPs.

More than two years later, and prompted by the rise of the Islamic State of Iraq and the Levant (ISIL), Cameron again wants parliament to authorise air strikes inside Syria. Once again, we are being asked to believe that the motive is purely humanitarian: to protect innocent Syrians from murder, rape and torture.

Don’t get me wrong. There are strong and very legitimate arguments for intervening in Syria – and equally strong and very legitimate arguments against it. Bashar al-Assad is a violent and brutal dictator and ISIL is perhaps the world’s worst militant group. If you believe, however, that the UK government, under David Cameron, is interested in human rights or driven by humanitarian motives then I have a bridge I’d like to sell you.

Consider the mountain of evidence which shows the British government has little interest in the human rights of oppressed Arabs across the region.

The Cameron who claims to want to save Syrian lives doesn’t seem interested in innocent Egyptian lives. How else to explain his decision to host General Abdel Fattah el-Sisi, elected president of Egypt with 97 percent of the vote in May 2014, after coming to office in a military coup the previous year, in London this week?

Sisi, lest we forget, was responsible for what Human Rights Watch has called the “most serious incident of mass unlawful killings in modern Egyptian history” and “one of the world’s largest killings of demonstrators in a single day in recent history”. More than 800 unarmed protesters were killed when Sisi’s security forces “cleared” the sit-in at Rabaa al-Adawiya square in Cairo on August 14, 2013.

Also read: Suez Canal II: The sequel that impresses no one

In total, according to the government-appointed National Council for Human Rights, at least 2,500 Egyptians were killed in the 18 months after Sisi’s July 2013 coup – including 1,250 Muslim Brotherhood members.

An astonishing 41,000 people have been arrested or detained in Egypt since the coup ...

An astonishing 41,000 people have been arrested or detained in Egypt since the coup and human rights groups such as the Cairo Center for Human Rights, the Carter Center and Human Rights Watch have been forced to relocate their offices and staffs abroad.

Meanwhile, journalists – including, of course, Al Jazeera journalists – have been locked up after sham trials and “it may soon be illegal to publish news the Egyptian government doesn’t like“. Sisi, concluded the normally sober and restrained headline writers at The Economist, is “worse than Mubarak”.

The question is: Whatever happened to the British prime minister’s stated support for “the aspirations of people in Egypt for a more genuine, open democracy” in the wake of the Arab Spring?

The Cameron who claims to want to save Syrian lives doesn’t seem interested in innocent Bahraini lives. He sent his Foreign Secretary Philip Hammond to Bahrain this week to mark the construction of Britain’s “first new permanent military base in the Middle East since 1971”.

When the Arab Spring came to Bahrain in 2011, however, the country’s unelected government, as Cameron and Hammond are well aware, violently cracked down on pro-democracy activists. Peaceful protesters in Manama’s Pearl Square were shot, tear-gassed, tortured and imprisoned on the flimsiest of charges.

And, four years on, the situation in Bahrain isn’t showing signs of improvement. In July, three UN human rights experts condemned the Bahraini authorities for “criminalising, prosecuting and imprisoning human rights defenders” inside the country.

The verdict of Amnesty International’s report on Bahrain in April was pretty stark: “Human rights abuses in Bahrain continue unabated”. Unabated. Among the abuses listed in the report were “torture and other ill-treatment of detainees, unfair trials, the imprisonment of prisoners of conscience and unlawful killings”, with Amnesty pointing out how “those responsible all too frequently [escape] accountability”.

And the British foreign secretary’s response? “Bahrain is not perfect by any means.”

The Cameron who claims to want to save Syrian lives doesn’t seem interested in innocent Saudi lives.

On average, according to Amnesty International, one person is executed every 48 hours in the Kingdom of Saudi Arabia. The majority of executions are carried out by beheading and cover “crimes” as absurd and medieval as witchcraft.

Also read: Egypt’s justice minister tells it like it is

Blogger Raif Badawi was sentenced to 1,000 lashes for “insulting Islam” – 50 of those lashes have already been administered. Activist Ali al-Nimr faces beheading and a public crucifixion – yes, crucifixion! – for alleged “crimes” committed when he was 17.

Cameron, of course, feigns outrage and shock over such awful behaviour by one of the UK’s closest allies in the region yet, as the Guardian and other papers reported in September, “Britain conducted secret vote-trading deals with Saudi Arabia to ensure both states were elected to the UN Human Rights Council [UNHRC], according to leaked diplomatic cables”.

But who or what is stopping Cameron from doing the “right thing” in these particular, aforementioned cases? No one is asking Cameron to bomb, drone or invade Egypt, Bahrain or Saudi Arabia. But if he truly cared about human rights, he could start by taking a series of small, simple, violence-free steps to prove it.

He could rescind his invitation to Sisi, close down the base in Bahrain, and stop doing behind-the-scenes deals with Saudi Arabia which undermine the UNHRC. He could also, incidentally, stop selling arms to these countries.

That he chooses to do none of these things, that he chooses instead to cosy up to these governments while turning a blind eye to their well-documented abuses, speaks volumes. 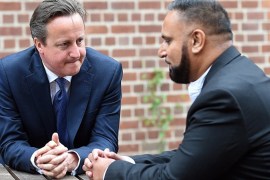