He subsequently published the three essays in a 1991 book, of which an English translation appeared in 1995 as The Gulf War did not take Place.

The dates of these essays are important if we remember what is now called the “Gulf War” occurred between August 2, 1990 (when Saddam Hussein invaded Kuwait) and February 28, 1991 (when a US-led coalition forced him out).

In other words, Baudrillard was writing and publishing these essays precisely at a time when the war was taking place, when the US and its allies were raining death and destruction on Iraq, and soon after it had just ended.

The temptation that Baudrillard could not resist in writing these essays with these deliberately provocative titles was the manner in which the unfolding events leading up to, during, and soon after the Gulf War provided him with a perfect example for his ideas of “simulacra”, “simulation” and “hyperreality”.

He wished rhetorically to register the fact that the Gulf War was an unfolding media event, a virtual reality, with simulated reactions masquerading for the real human experience of being at war. In the midst of this hyperreality, the reality of the Iraq war was drowned.

Also read: So are we witnessing an EU meltdown?

At the heart of Baudrillard‘s exquisite insight into the nature of simulacrum and hyperreality was a cry for the real, together with the fear that we had altogether lost the possibility of real fear, real despair, real agony – for ourselves or for others.

Some 25 years after the first US-led military operation in Iraq and the publication of those essays, the hyperreality of that Iraq war has come to haunt the reality of the Paris attacks on November 13 in Baudrillard‘s own country. The irony should not be lost in the terror of that evening in Paris.

The philosopher’s home on fire

Were he still alive, would Baudrillard today have written a similar essay titled “The Paris attacks did not take place?” Would it have been possible for the French philosopher to be as playfully insightful when the terror was inflicted on himself, his neighbourhood, and his own people?

Perhaps yes, perhaps no. But one thing is sure: the enduring insights of Baudrillard into the nature of simulation and hyperreality were as evident in Paris as they were when he theorised during the Gulf War.

When the Paris attacks occurred, BBC World News – as the best example of other globalised media – became the picture-perfect proof of Baudrillard‘s insight into the nature and function of hyperreality.

The BBC was so thoroughly fixated on the events in Paris that its coverage became positively prosaic, formulaic, utterly inane, overwhelmed by vacuous images to such an extent that they became bereft of meaning.

The world ceased to exist for the BBC. And in the hermetic seal that it created around the horror of Paris, there was no way for the terror in Paris to be registered and analysed by the world at large – the magnitude of its terror humanly perceived and understood by non-Europeans.

The BBC would momentarily break from Paris to go to its “Focus on Africa”, for example, but only to ask its reporters to go and collect words of sympathy from Africans for Paris – not for Africans to talk about their own terror so the report could underline the Paris attacks.

It would say something about the identical Islamic State of Iraq and the Levant (ISIL) attack in Lebanon, but not before prefacing it by saying how the Lebanese were sending their condolences to Paris.

The focus was so intensely on Paris, that Paris lost its reality as a city in France, in Europe, on this planet, and imploded into a meaningless simulacrum of itself.

Paris needed a comparative and global long shot to make its suffering meaningful, but the BBC producers, reporters, and cameramen – again as the best example of other Eurocentric global media – were so intent on extreme close ups of Paris and nothing else, cutting it off from the rest of our humanity. Paris on BBC became a digitised photoshop of itself.

The magnificent French philosopher Baudrillard was crying in his grave for his beautiful city and laughing at the BBC coverage at one and the same time.

Also read: Without initiative, Paris attacks will change nothing

But, and there is the rub: The world does not stop for the BBC to recover from its nervous fixations with one European thing or another. Before long, the Mali hotel attack happened, and before that atrocity was finished Brussels was under siege, and then the Russian fighter jet was downed by Turkey.

The BBC was now falling flat into its own trap, and a textbook example of Baudrillard‘s notion of simulacrum. Its aggressive transmutation of the reality of Paris into a vacuous hyperreality had now metastasised beyond repair.

The theorists of the hyperreal war and the philosophers of fearful simulacra are no longer safe in the sanctity and serenity of their home. Walls and borders have collapsed – the East is in the West, the West already in the East.

This is the dawn of a new philosophical age, where the European philosopher is no longer safe from the consequences of his own theories. The task for philosophy today can no longer be split along false civilisational divides.

The fighter jets flying over the Mediterranean to bomb Iraq, Syria, Libya, or Mali and the refugees boarding a boat and then walking to Europe have now created an entirely different factual geography overriding the imaginative tyranny of “the West and the Rest”.

That terrifying Paris attacks did take place, entirely independent of the BBC’s hyperreality overwhelming the terror of the event to nullity, as did those in Lebanon, Egypt, Iraq, Syria, Turkey, and Afghanistan.

Baudrillard anticipated and theorised the plasticity of the simulacrum of this frightening reality when he said “the Iraq war did not take place” long before his own Paris was under attack for real, through the smoke and mirrors of all hyperreality and simulacra. 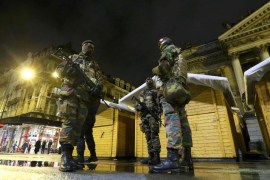