Airlines and travel companies are bracing themselves for a potential drop in customers as the full impact of the Paris terror attacks and other events sinks home among a normally flying-hungry public and business community.

It hasn’t been helped by a sudden spate of bomb threats against aircraft since the evening of bloody horror in the French capital. Hoax threats against airlines were probably to be expected and they began when three Air France jets were grounded in the days following the attacks.

The first was an Amsterdam-Paris flight, stopped because of a threatening tweet. The second had left Los Angeles and was diverted to Salt Lake City after a bomb threat. The third had left Dulles Airport in Washington DC; it was diverted to Halifax Stansfield International in Nova Scotia following a similar threat.

Not surprisingly, no-shows on flights to France are now running at higher than normal levels. But the situation has worsened as non-French carriers also become embroiled.

Singapore Airlines disclosed there was a bomb threat to one of its flights originating in San Francisco. It landed safely at Singapore’s Changi Airport.

Right to be afraid?

“We regret we are unable to provide details as it concerns security,” the airline said in a statement.

Then, also in Halifax, a Turkish Airlines jet was delayed after a threat. Nothing was found and it was cleared to continue its journey.

Also read: What brought the Russian airliner down?

In another incident four passengers were removed from a Spirit Airlines flight at Baltimore’s BWI airport after a flight attendant reported “suspicious activity”. Three men and a woman of Middle Eastern ancestry carrying several backpacks were escorted from the plane. Checks found nothing suspicious and they were released.

Added to the downing of a Russian Metrojet plane returning to St Petersburg from the Sharm el-Sheikh resort in Egypt by a terrorist bomb over the Sinai Peninsula on October 31, and last year’s shoot-down of Malaysia Airlines Flight MH17 over the Ukraine, it is hardly surprising that hosts of flyers will be giving serious thought to their travel plans.

While it involved military action, the latest downing of a Russian Su-24 bomber by Turkish fighters, allegedly because it was violating Turkish airspace, has only added to the growing fear that airlines have become a prime target for ISIL terrorists, who have publicly declared their intention to attack aircraft.

The question is: are travelers right to be afraid? It is common knowledge that air travel remains the safest form of transport known to man. Countries around the world have already tightened security at their airports, bringing in more visible security, often with increased police or military presence.

Airlines have also upped their levels of security and their surveillance of the cargo that is carried in aircraft holds. Since MH17 they are also far more cautious about overflying conflict zones.

Indeed, just hours after the shooting down of the Russian warplane a quick check of flight tracking app Flightradar24 found only three commercial flights were anywhere near the Turkish-Syrian border. They were two Boeing B737 jets belonging to Turkish airline Pegasus and an Airbus A320 operated by Ukrainian charter firm Dart Airlines.

The aviation industry and authorities across the globe are taking events extremely seriously. Already, the International Civil Aviation Organization (ICAO), the United Nations’ aviation agency, has set up a panel of security experts to review ways to better protect global airports from terrorism. That followed concerns of lax security at Egyptian airports after the Russian Metrojet plane was destroyed.

While stressing that flying is safe, he said ICAO is focusing on finding a balance between aviation security and the facilitation of air travel.

Of course, it must be said that no level of security, apart from keeping planes on the ground, can guarantee 100 percent that there will be no terrorist incidents in the air. But some 3.5 billion people and 50 million tonnes of cargo will fly this year, about a million people a day over 50,000 air routes. The vast majority will arrive at their destination safely.

Major airlines and airports are very conscious of security threats and if there was lax security at Sharm el-Sheikh in Egypt, it is not a reflection of the situation elsewhere.

While there has been and will be a reduction in passenger traffic numbers as the result of the Paris attacks and other events, typically there is a quick resumption of travel patterns.

After the worst terrorist attack in history on 9/11, airlines themselves were surprised at the speed with which passenger numbers returned to normal. The flying public, it seems, are a very resilient lot and they won’t let terrorism stop them travelling. And flying still remains the safest form of transport known to man.

Tom Ballantyne is chief correspondent of the Hong Kong-published Orient Aviation magazine. He has 40 years experience in international journalism. He is a regular commentator on aviation issues on television and radio in Australia, Asia, the Middle East and the United Kingdom. 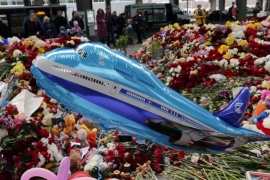 What brought the Russian airliner down?

The battle for answers was launched on predictable political lines.

Will mystery ever be solved?

Blame game yet to begin