On the surface, China looks nothing short of an Asian juggernaut. It boasts Asia’s biggest economy, having eclipsed Japan in the aftermath of the global financial crisis, and is poised to become the world’s biggest in the near future.

It is already the world’s largest trading power, having overtaken the United States in 2013. And within a relatively short period, China has emerged as a leading investor, particularly in the realm of infrastructure development, across the global south and beyond.

Unlike Japan, China is a comprehensive power, which isn’t bedevilled by constitutional restrictions on the development of its offensive military capabilities. Flushed with cash and ambition, China has rapidly caught up with leading military powers, now boasting two operational fifth-generation jet fighters, an aircraft carrier, and sophisticated asymmetrical area-denial/anti-access (A2/AD) capabilities.

No wonder then, that leading naval experts such as James Holmes have described China as “a near-peer [military] competitor vis-a-vis the United States” in East Asia.

And yet, one can’t escape the impression that China is suffering increasing diplomatic isolation due to its aggressive manoeuvres across contested waters such as the South China Sea.

Not to mention that China’s recent economic troubles, ranging from massive stock market crashes to declining manufacturing exports, have chipped away at its long-held image as a beacon of capitalist success.

Conscious of growing worries over China’s economic health, Chinese President Xi Jinping, in his keynote speech during the APEC summit, was adamant that his country’s economy is strong, resilient, and dynamic.

All of a sudden, China has been on the diplomatic back foot, while the US and its allies have been confidently pushing for greater regional unity to ensure freedom of navigation and maritime security in the Asia-Pacific region.

Confronting criticism over its territorial assertiveness in adjacent waters, China desperately sought to eliminate any multilateral discussion of the South China Sea disputes.

Fearful that the Philippines, this year’s APEC host and China’s rival claimant state, would use the event to diplomatically confront Beijing, Xi refused to confirm his participation until the 11th hour, and making it conditional on the host’s agreement to brush aside the maritime disputes during the APEC summit.

Before Xi’s highly anticipated visit, China dispatched Foreign Minister Wang Yi to Manila to warn the Philippines against embarrassing his boss. In effect, Beijing tried to influence the summit’s agenda so that no dark shadow would be cast on its image.

To secure Xi’s participation, and to bolster its credentials as a magnanimous host, Manila promised not to mention the disputes in the main agenda of APEC, and extended a warm welcome to the Chinese leader.

After all, Xi’s visit would mark his first to the Southeast Asian country, potentially paving the way for the resuscitation of long-frozen high-level contacts between the two countries. As the leader of the second biggest economy in the Asia-Pacific region, Xi’s presence was considered as essential to a successful APEC summit.

Though China managed to block any discussion of the disputes in the APEC’s main statements, the Philippines did bring the issue to the fore in its bilateral engagements on the sidelines of the summit.

Shortly after landing in Manila, US President Barack Obama made a highly symbolic visit to the Philippines’ flagship naval vessel BRP Gregorio del Pilar. He reiterated the United States’ “ironclad commitment” to its alliance with the Philippines, pledging to donate two vessels and an increase in overall maritime security assistance to the country.

Both countries emphasised the centrality of freedom of navigation to regional security. For the US and its allies, China’s massive reclamation activities and increased military presence across the South China Sea poses threats to freedom of navigation in one of the world’s most important sea lines of communications.

Vietnam, another maritime rival of China, also signed a strategic partnership agreement with the Philippines, which deepens diplomatic, legal, and naval cooperation between the two Southeast Asian countries against China. The new agreement was meant to signal to Beijing that its rivals in the South China Sea were forming a counter-alliance.

The Philippines signed a new military deal with Japan as well, another regional power that has been perturbed by China’s maritime assertiveness. Under the latest deal, the Philippines is expected to benefit from greater military aid from and more regular joint naval exercises with Tokyo.

Other regional powers such as Australia, South Korea and even Russia, offered greater military assistance to the Philippines, which has been caught in a precarious maritime dispute with China.

Earlier this month, an anxious China went so far as sabotaging a high-level talk among regional defence ministers, the ASEAN Defence Minister Meeting-Plus, by refusing to sign up to a joint statement that would have covered the South China Sea disputes.

Yet, to China’s dismay, the recently concluded ASEAN summit saw Southeast Asian foreign ministers pushing for a legally binding “code of conduct” in the South China Sea as a way to constraint China’s territorial assertiveness in the area.

Without a doubt, China is expected to stand its ground and further consolidate its territorial claims in adjacent waters. But it is also clear that Beijing is no longer seen as a fully benign, peacefully rising power by many of its neighbours, who have increasingly gravitated towards the US as the supposed guarantor of regional security in Asia.

Group seeks freer movement of trade and capital in SE Asia and to create the world’s seventh-largest economy. 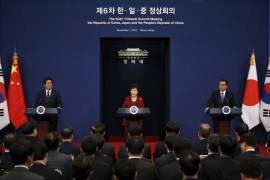 Dawn of a new age in Asia?

While Northeast Asia resembles the West in terms of wealth and tech prowess, it is also a place filled with animosity.