Back in 2014, the Indian author and commentator Pankaj Mishra claimed that Narendra Modi’s ascension to power “announces a new turbulent phase for the country – arguably, the most sinister since its independence from British rule in 1947”.

For many on the left, the rise of Modi – a man accused as chief minister of Gujarat of being complicit in anti-Muslim violence that claimed hundreds of lives in his state in 2002 – was a reason to despair of not just Indian politics but of Indian democracy itself.

Mishra termed Modi’s victory as a sign of “extensive moral squalor” in a country seduced by “the lure of an indigenised fascism”, echoing the widespread conviction that India had swung decisively to the Hindu right.

Yet, within a mere 18 months, the very same party and its leader have been dealt defeats in two key state elections. The first came in Delhi in February, when the avowedly populist and secular Aam Aadmi Party swept the polls by consolidating the minority and the urban underclass vote.

November ushered in the debacle in Bihar, where a grand alliance of old-school state politicians running on a plank of government subsidies, caste-based arithmetic and anti-Hindutva appeals prevailed over a barnstorming Bharatiya Janata Party (BJP) campaign led by Modi himself.

The shift in his fortunes was writ large in the numbers: Last year, the BJP won 22 of the 40 seats in the national parliament, but this time around, the party and its allies could only drum up a paltry 58 out of 243 state legislature seats.

The leading liberal newspaper, the Hindu, described the outcome as a vote “for a pluralist vision of India, for an idea of Bihar that is both inclusive and progressive”.

So, is India a nation of materialist nationalists who yearn for order, authority, and homogeneity? Or is it a pluralist and a populist society resistant to communalism?

One of the shared mistakes of pundits and politicians is their tendency to over-read electoral verdicts. It is now clear that both Mishra and Modi made the same error of misinterpreting the 2014 results as an endorsement of the Hindu nationalist agenda.

It would be equally foolish, however, to mistake the Bihar outcome as a validation of Indian secularism. In a democracy – especially a less affluent one – votes are determined by more immediate concerns, and Modi spoke with the greatest fervour back in 2014.

“Do you get power 24 hours a day? […] Why does Meerut not get roads, railways, an airport?” he thundered at one of his rallies, pounding his favourite drum of development in one of the most religiously polarised states in the country.

He even repurposed the most infamous part of his political record – the 2002 Gujarat riots that moved the United States and Britain to deny him a visa – turning the riots into a personal achievement: “Ten years ago, in Gujarat, there used to be many riots. But now the people of Gujarat know they have to live in peace, to live free from the politics of polarisation.”

For all the anti-Muslim dog-whistling that laced the BJP leadership’s rhetoric, most Indian voters picked Modi because they believed his core campaign promise: “Sabka saath, sabka vikaas” [Everyone’s advancement, together].

And they punished him in Bihar because he failed to deliver on both counts. They have seen little by way of material progress under Modi, and far too much of destabilising violence. Bihar’s incumbent chief minister, on the other hand, could point to a proven riot-free record of delivering bijli-sadak-paani (electricity, roads, water). When Modi asked the same questions in Bihar as he did in Meerut, the answer from the crowds was most often a resounding yes.

“Plan A for Modi is to succeed on the economic front, and if that does not work then emphasising Hindutva politics may be an important Plan B,” argued the historian Christophe Jaffrelot back in May.

As predicted, the Modi government has indeed given greater latitude to its most extremist elements even as it comes under increasing pressure over its inability to deliver economic reforms.

And so it is that when pushed on to the back foot over development, Modi made his second mistake. The BJP ramped up the communal rhetoric with the prime minister himself leading the charge.

Beef bans reared their ugly head, as did brazen attempts to turn lower caste Dalits against Muslims. The BJP’s president, Amit Shah, went so far as to declare that if BJP lost in Bihar, “crackers will be bursting in celebration in Pakistan”.

But all this was to no avail, perhaps because India is increasingly a nation driven not by religious sentiment but material aspiration. And yes, its voters are indeed willing to give a man accused of colluding in the massacre of minorities a pass if he can cater to the same.

Indians may or may not be secular, may or may not want a Hindu nation, but they all unanimously want to get ahead, and in peace – without lynching or riots.

Condemn it as crass materialism or gloss it, as the columnist Pratap Bhanu Mehta does, as “a calm and calculated choice”, Biharis proved, much like the Americans, it’s always the economy, stupid. 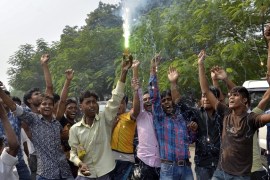 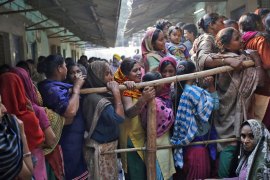 Polls show Arvind Kejriwal’s Common People’s Party ahead in state election, a result that would deal major blow to PM.