The real surprise is that there should be any surprise. Watching the film series titled Syria’s Rebellious Women, it should be obvious that this is the case: that there are women actively involved in the war, on the ground.

Filmed over the past 18 months in rebel-held, war-ravaged Aleppo, northern Syria, these documentary films show women who have been on the front lines alongside men in this war-torn city, or are responsible for securing food and vital supplies, or stitching up the wounded in field hospitals and making sure that schools open and kids get to them.

One of the women profiled in the film, Ahed, was at the forefront of demonstrations in Aleppo, Syria’s second city, both against the Bashar al-Assad regime and against the Islamic State of Iraq and the Levant (ISIL), and faced beatings by both. Now engaged in relief work, she notes that some of the men in this conservative city may look at her askance. But she doesn’t know why; she says: “I find it normal.”

These documentary films – the work of Syrian journalist Zaina Erhaim with the Institute for War and Peace Reporting (IWPR) – are currently screening across Europe and the United States – with one aim being to bring our straying focus back onto women in this nightmarish war.

More specifically, the idea is clearly to stop us viewing Syrian women only as victims – enslaved, raped or forced to flee the country – without pausing to think if this is actually representative of the entire female population.

So, alongside Ahed, we’re introduced to Zein, one of many women who has been imprisoned and tortured at Adra prison, in Damascus – grimly notorious as the place where political prisoners are detained by the Syrian regime – a “cemetery for the living”, says Zein.

Released after 14 months, she works as a paramedic at Aleppo’s now makeshift Dar al-Shifa hospital, which was bombed and destroyed by the Syrian army. Then there’s Ghalia who, despite repeated attacks and an arson attempt, founded several vocational training centres for women in the rebel-held Idlib province in northern Syria.

Waed, meanwhile, left her family behind in a government-controlled part of Syria and is the only female citizen journalist (doubling up as a paramedic), in northern Syria – having to cover her head and control her words while working in Aleppo.

These women, fighting against both the Assad regime and ISIL, don’t fit into any easy political narratives. They aren’t part of a divided opposition, nor comprising various jihadi elements. They aren’t backed by any of the international powers that have been funnelling funding or weapons to their “sides” in what they’ve turned into a gruesome proxy war.

And, of course, they don’t fit into a frame of Arab women as passive, helpless victims, either. As such, they aren’t picked up by a Western viewfinder that seeks Middle Eastern women in need of liberation – the complex defined by Gayatri Spivak, a professor at Columbia University who wrote the influential essay, Can the Subaltern Speak?, as the belief that: “White men are saving brown women from brown men.”

But if women are not taken seriously as components in the fight on the ground, they aren’t recognised as being part of any peace, either. When a group of Syrian women turned up at the Geneva peace talks in December 2013, demanding to be a part of this international peace effort, then UN Special Envoy to Syria Lakhdar Brahimi pretty much admitted this to be the case, saying: “[…] women have an important role and women must play that role, but unfortunately it’s not very easy to see women playing that role.”

The Syria peace talks held in Vienna a few weeks ago – and resumed over the past weekend – notably did not include any actual Syrians in the negotiations. But those negotiations also exposed the glaring omission of any female delegates, too – as the all-male picture released from the talks table revealed.

But the problem extends beyond the talks too. While it is painfully true that women are dealing with the most grotesque violence in Syria, with rape and sexual violence routinely used as weapons of war, it is harder to grow international solidarity among women if Western women are seeing only female victims in the Syria war.

Film-maker Erhaim, who is also a trainer and Syria project coordinator with IWPR, notes that aid organisations “are victimising the women [in Syria]. It’s a concept I still see” – adding that she hopes these films will help counter such assumptions.

Made at great risk for all the women involved, Erhaim also hopes that her films will reset the documentation of Syria’s nightmare war. She tells her female protagonists: “You may well be forgotten when history is written. I just want to prove that you were there.” 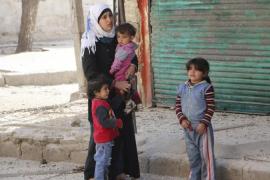 On women and children

Is it wrong to use the expression ‘women and children’ when reporting on disasters or war zones?