“They are trying to liquidate the unity of a nation with more than five centuries of history.”

This dramatic proclamation was made by right-wing Spanish Prime Minister Mariano Rajoy, up in arms over the resolution just passed by the parliament of Catalonia committing that region to proceed with preparations to secede from Spain.

With a population of more than seven million, Catalonia accounts for approximately one-fifth of Spain’s economic output.

Of course, given the country’s long history of repression of Catalan identity and nationalism, the whole “unity” bit is rather disingenuous. As economist Daniel Raventos, a lecturer at the University of Barcelona, recalled to me in an email, the constitutional enshrinement of the “indivisible unity of the Spanish nation” is in fact a relic of the era of Francisco Franco.

Among his many claims to notoriety, the former dictator outlawed the Catalan language and even the use of Catalan names, as well as the Catalan national dance and other customs.

Meanwhile, if we want to talk about liquidating things, it’s no doubt helpful to bring up the wanton elimination of Spanish livelihoods in the aftermath of the financial crisis, which saw youth unemployment soar to nearly 60 percent.

Pervasive austerity cuts and frenetic home evictions contributed to a situation in which an increasing number of Spaniards have opted for self-liquidation – ie, suicide.

Given the Spanish government’s sociopathic handling of the crisis, which some might see as an effective liquidation of its legitimacy to preside over the “indivisible” Spanish nation, it’s perhaps no wonder that the affair has helped to invigorate secessionist aspirations in Catalonia.

According to an informal vote held in November 2014, 80 percent of voters were in favour of independence. Despite overwhelming regional support for an official referendum on the matter, the central government has maintained its position of party pooper – and, now that the Catalan parliament has gone ahead with its independence bid, Rajoy has accused nationalists of “trying to do away with democracy”.

Also read: Podemos and the Catalan cause

To be sure, nothing spells “democracy” like refusing to consult the inhabitants of a territory about their political preferences.

The anti-independence furore that is being publicly stoked by many of Spain's politicians provides a convenient distraction from other issues that might be of greater objective interest to the general population...

After the parliamentary ruling, Rajoy made haste to Spain’s Constitutional Court to block the secession bid. The Madrid-based court immediately complied, issuing a warning to Catalan officials that they could be prosecuted for “disobedience” if they continued with their scheme.

The Constitutional Court’s consideration of the Spanish government complaint is supposed to entail an automatic suspension of the Catalan declaration while hearings are carried out. The problem, however, is that the declaration itself contains a pledge to ignore the court’s rulings.

A recent article on the BBC’s Spanish-language website, BBC Mundo, specifies that the Spanish Constitution would allow state security forces to be used to bring the Catalans to heel, or the announcement of a state of exception or siege. These options, the article stresses, would be “clearly a last resort”.

But as Raventos commented to me: “The ‘Catalan problem’ (as they say in Madrid) will not be resolved until the right to self-determination is recognised.”

Regardless of how the current scenario plays out, the anti-independence furore that is being publicly stoked by many of Spain’s politicians provides a convenient distraction from other issues that might be of greater objective interest to the general population, particularly in the run-up to next month’s national election. These range from persistent unemployment to government corruption.

None of this is to imply, obviously, that Catalan nationalists are universally noble in either their motivations or manoeuvres.

For example, in his book Politics in a Time of Crisis, Pablo Iglesias – general secretary of Spain’s left-wing Podemos party – writes about some of the activities of the Catalan government under the pro-independence Artur Mas while ordinary citizens bore the brunt of the financial crisis: the regional government “cut the rate of tax on casinos from 55 to 10 percent so as to provide legal coverage for an aberrant scheme called Barcelona World, a gambling complex” in the city of Tarragona.

As Mas now seeks to reinstate himself as regional president, Spain’s English-language publication The Local notes that the anti-capitalist CUP party has “refused to support [him]… calling instead for an independent candidate untainted by corruption and austerity cuts to lead Catalonia towards independence”.

In the end, Catalonia has every right to secession, and to status as an independent nation. But what the world could really use are more secessions from the neoliberal order; otherwise “independence” will maintain its status as a word bereft of meaning. 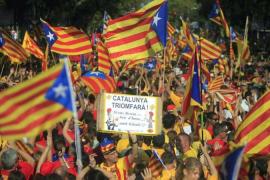