France has been struck a second time this year by terrorism, but this time political reactions are vastly different from the national unity that had followed the attacks on Charlie Hebdo in January. While opposition party leaders had shown restraint in their criticism and mostly rallied behind President Francois Hollande in the immediate aftermath of the Charlie Hebdo attacks, the tone and postures adopted by Nicolas Sarkozy and Marine Le Pen are significantly different today.

This defection from the spirit of national unity in comparison with the political cohesion of January is paradoxical in itself. Charlie Hebdo was a satirical newspaper that Sarkozy had tried to shut down for many years. The constant attacks from its authors on political and religious establishments made the right-wing leaders’ compassion appear quite hypocritical.

The fallen caricaturists used to point out Le Pen’s amateurism and xenophobia as well as Sarkozy’s obsession with money and power much more often than it criticised religion. Watching Sarkozy suddenly transformed into a champion of press freedom after he tried to muzzle dissident voices smacked of irony.

The attacks last Friday on Parisian youth, on the very basis of French “art de vivre” (cafe terraces, music concerts, restaurants) should have eased political consensus over a period of grief and the definition of coordinated answers.

Yet, less than 24 hours after barbarous terrorism claimed 129 innocent lives, the initial shock quickly dissolved and left the way open to political calculations and individual interests.

The political context today is markedly different from in January. Regional elections are scheduled for early December and although a handful of candidates suspended their campaigns in grief, many on the right wing are hoping to build on the momentum and French anger to amplify what was already expected to be a swing in votes towards the opposition. Political unity in the wake of the atrocious incidents thus quickly drifted towards electoral cacophony.

Many on the right wing are hoping to build on the momentum and French anger to amplify what was already expected to be a swing in votes towards the opposition.

Sarkozy does have a point. National unity beyond grief only makes sense if it backs an effective domestic and foreign policy strategy. Yet when Sarkozy asks for “major inflexion in French security and foreign policy”, educated analysts can only shake their head in disbelief.

On the domestic scene, Sarkozy pointed out the unacceptable fact that one of the terrorists had been charged eight times for smaller crimes without spending a single day in prison. Yet those verdicts were delivered between 2004 and 2010 during the administration of Sarkozy himself. His laws were the cause of the judicial bottleneck which failed to identify future terrorists.

Similarly, the foreign policy agenda implemented under Sarkozy’s administration, supportive of the ruthless Syrian regime – making Bashar al-Assad a guest of honour at the French National Day celebrations in 2008 – are part of the causes of the Syrian civil war.

These inconsistencies are highlighted within the Sarkozy party itself as the former president tries to secure his party’s nomination for the presidential elections in 2017.

The current front runner, former Prime Minister Alain Juppe, chose a much different and respectful attitude by supporting political unity, while suggesting adaptations to the republican society model that failed to ensure the integration of some French minorities.

Similarly, Dominique de Villepin wisely warned against the martial rhetoric used by Sarkozy, underlining that this only further legitimises and echoes ISIL rhetoric.

What this political attitude denotes is a regular drift of Sarkozy towards extreme-right rhetoric in a desperate attempt to limit Marine Le Pen’s rise in the polls.

However, what it fails to realise is that it plays right into ISIL’s hands by further polarising French society. Irresponsibly blowing on the ashes of Islamophobia, failing to strengthen the republican pact and to address the deeper roots of radicalisation only ensures the success of ISIL propaganda and the likelihood of future attacks.

Instead of encouraging the proud reaffirmation of a French model of secular republicanism where the largest Muslim and Jewish communities in Europe live in peace, Le Pen and Sarkozy cave in to the very objective of ISIL: to destroy the basis of a fragile multicultural interfaith dialogue – defended by a huge majority of French citizens – that makes France an example for so many countries plagued by communitarianism.

As for Le Pen, like every extreme-right leader she is thriving on this environment of fear. Fascist movements affiliated to her party have staged several demonstrations over the past few days to stir the scapegoating of immigrant communities, the very basis of her political platform.

So far only a few of these have degenerated and in many cases, such as in Lille, the very city where she is running for elections in December, the peaceful demonstrators honoured the very values of France – Liberte, Egalite, Fraternite – by routing the fascist troublemakers.

If the French population can remain united and prevent the republican model from crumbling as a result of the irresponsible behaviour of (extreme) right leaders, then terrorists will eventually be defeated.

If not, then the number of isolated fundamentalists feeding the ranks of ISIL will grow and the rate of terrorist attacks will increase. 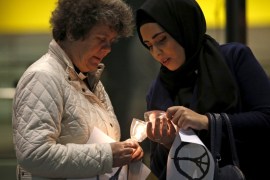