With the start of the Vienna talks, the future of Bashar al-Assad has again come to dominate discussions about the future of Syria. The key word appears to be “transition”, with everyone disagreeing on how long this could be and how things can be choreographed.

Yet although he has not been violently ousted from power, Assad has already lost Syria.

November 13 marks the 45th anniversary of the Assad family taking control of Syria. Bashar has lasted half the time of his father. However, the country he nominally presides over is a shadow of its former self.

He has outsourced the defence of his regime to Russia, Iran and Hezbollah. He has lost most of the country’s territory and seen the economy collapse in half. He has seen one in two Syrians forced from their homes. But Assad cannot be said to have ‘won’ anything beyond his own physical survival.

The biggest damage has been brought on the Syrian people and their society. In his new book The Alawis of Syria, academic Michael Kerr described how “the state-building project of Hafez al-Assad lies in ruins”.

There are more than four million Syrian refugees – more than the entire population of the Republic of Congo. According to UNICEF, nearly three million Syrian children are out of school both inside and outside a country where once primary school enrolment was almost 100 percent.

While 19 countries have agreed to back a UN-led peace process during multilateral talks in Vienna, all actors are looking to simultaneously escalate their involvement in the conflict.

A recent British parliamentary report on Syria painted a picture of “thousands of fighting forces in various coalitions and umbrella organisations, with unclear aspirations and shifting alliances”.

Robert Ford, the former US ambassador to Syria, has gone so far as to suggest that “we need a new national unity government in Damascus”.

Talk of “unity” may seem somewhat premature. ISIL in Syria may become a version of Hezbollah in Lebanon; clearly separate Kurdish areas may harden; and the retreat of the Alawites to the coast may continue.

It is important not to forget what triggered Syria’s civil war in the first place. While the Arab Spring may have been the spark, the ripeness of the country for an uprising was set up by the prewar challenges of booming demographics, large-scale urbanisation and the failure of the economy to deliver in the face of growing concerns with corruption and sharpening sectarian cleavages.

Bashar, despite surviving a humiliating exit from Lebanon and the threat of regime change under George W Bush, may have seemed more secure than ever, but, in fact, he was haemorrhaging both legitimacy and effectiveness as a leader.

The country’s very geography was turning against him. Syria had been through five successive years of drought before the uprising, with the years 2007-2008 bringing reportedly the worst drought in 40 years.

This had a serious impact on the agricultural sector, especially in the east of the country – today, areas dominated by ISIL. Around 1.3 million people were affected, and an estimated 800,000 farmers and herders lost almost all their livestock.

A study published by PAX last month set out the devastating environmental impact of the conflict, explaining that “pulverised building materials containing cement dust, household waste, medical waste, asbestos and other hazardous substances can pose acute and long-term exposure hazards to civilians living in or returning to these areas”.

It is believed that 1.2 million houses – or one-third of all houses in Syria – had been damaged or destroyed by December 2013, a number that, almost two years later, must be substantially higher.

The UN estimates that more than 52 percent of Aleppo’s housing units have suffered partial damage or have been destroyed. Of its 123 neighbourhoods, 21 have been left uninhabitable, while 53 are only partially functioning. Electricity, water supply, and waste management have all taken huge steps backwards, cholera has broken out and the threat from ISIL to blow up the Tabqa Dam should not be taken lightly.

Forty-five years on from his father’s capturing of the Syrian state, Bashar, the man who inherited the crown, has run the country into the ground and, today, is more of a puppet sitting on a throne secured by outside interests. It seems that he would see Syria burn if he were to be crowned the king of ashes. A hollow victory, indeed. 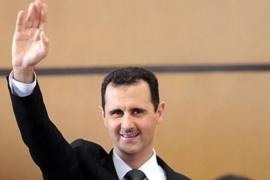 Why Assad will fight to the end

From Bashar al-Assad’s perspective, he really has no option other than to fight to the death.