When Stephen Harper’s Conservatives were voted out of power in Canada last month, Israeli Prime Minister Benjamin Netanyahu lost the man Haaretz once termed his “closest ally” and “the foreign leader friendliest to Israel”.

So stuck on each other were they that, in early 2014, when Harper led a taxpayer-subsidised entourage of 208, including 21 rabbis, 10 Christian evangelical leaders, Canadian lobbyists for Israel and even a representative of the Jewish Defense League to Israel, the former prime minister serenaded Netanyahu with The Beatles’ “Hey Jude”.

No wonder that, in the wake of Harper’s electoral defeat, one of the big questions being asked both in Israeli and Canadian Jewish media is “Whither Canadian policy regarding Israel now?”

Fears are that Canada will no longer, as Harper vowed in a speech to the Knesset, “stand with” Israel “through fire and water”; that Harper’s ideological position on the Israeli-Palestinian conflict would be replaced by a more balanced approach; that new Prime Minister Justin Trudeau might even hew to the principles espoused on the government’s website, principles that include “the creation of a sovereign, independent, viable, democratic and territorially contiguous Palestinian state”.

A shift in tone

Which would explain why, four days after his Liberals swept into power, Trudeau took a call from Netanyahu, resulting in what was described as a “very positive” discussion.

According to Trudeau’s spokesperson, the new prime minister had “explained there would be a shift in tone, but Canada would continue to be a friend of Israel’s”. Netanyahu shouldn’t have worried.

Also read: Canada as the world knew it

Yes, Trudeau has pledged to normalise Canada’s relations with Iran, ties that Harper cut in 2012 to Netanyahu’s applause. And, it’s also true that he will likely embrace the P5 +1 nuclear deal which former Conservative Foreign Affairs Minister Rob Nicholson denounced because of Iran’s “continuing support for terrorism, its repeated calls for the destruction of Israel, and its disregard for basic human rights”.

But will the Trudeau government ever condemn the expansion of illegal settlements in the occupied West Bank? Or restore Canada’s contributions to the Palestinian refugee aid organisation UNRWA (United Nations Relief and Work Agency) that Harper eliminated? Or speak out against any more military attacks on Gaza?

The record shows that Trudeau has, so far anyway, said little or nothing in support of Palestinians or their rights to live in peace.

During “Operation Protective Edge” in July 2014, he stated: “Israel has the right to defend itself and its people. Hamas is a terrorist organisation and must cease its rocket attacks immediately.”

In speeches at Canadian synagogues, he has asserted that his party “will have Israel’s back” because it is “the only real democracy in the Middle East”, sharing “the very values and ideals that define Canada: values of openness, respect, compassion, that seek for justice, search for peace…”

On Boycotts, Divestment and Sanctions (BDS), he has been strongly opposed, in speeches and even tweeting, in both English and French, complete with a hashtag coined by anti-BDS students, “The BDS movement, like Israeli Apartheid Week, has no place on Canadian campuses. As a @McGillU alum, I’m disappointed. #EnoughIsEnough.”

One wonders what his Liberal predecessors in the prime minister’s office, including his father, the late Pierre Trudeau, would make of his position.

After becoming PM in 1968, the senior Trudeau opened Canadian embassies in Arab countries, protested Israel’s presence in Lebanon, maintained relations with the PLO, and spoke out against the massacre of hundreds of Palestinians in the Sabra and Shatila refugee camps.

In 2003, then-Liberal Prime Minister Jean Chretien refused to join the attack on Iraq, infuriating those who saw Israel as imperiled in the “war on terror”.

But, in 2006, after former Liberal leader Michael Ignatief condemned Israel’s bombing of the Lebanese village of Qana as a “war crime”, Jewish sympathies began to lean rightward.

Consequently, these are very different times in Canada. The country has tilted on its political axis post-9/11. The Harper Conservatives nourished fears of rampant terrorism. Refugees became suspect. During the bitter election campaign, undercurrents of Islamophobia and xenophobia were exposed.

Historically, Jewish Canadians, with their strong sense of social justice, gravitated towards the centrist Liberals and even the left-of-centre New Democratic Party. But, by 2011, when Harper finally won his majority, his victory was helped by longtime Liberal ridings with significant numbers of Jewish voters who went Conservative.

Interestingly, during the 2015 election, many of these ridings swung back. But one can’t help but wonder if things would have turned out differently had Trudeau not been so supportive of Israel.

Now, newly named Foreign Affairs Minister Stephane Dion has announced that Canada will return to its role as an honest broker, and renew its ties with other Middle East countries.

“Israel is a friend; it is an ally,” he told iPolitics.ca. “But for us to be an effective ally we need also to strengthen our relationship with the other legitimate partners in the region.”

Not surprisingly, Dion’s remarks are now being parsed by Canada’s Jewish and right-wing media. But they need not be concerned. That’s because Canadian governments before Harper’s didn’t refer to Israel as a “friend” or “ally”.

Now the Liberals are doing just that.

Harper may have left the building but, when it comes to Israel, he haunts us still. 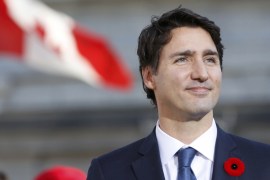 After 10 years of Stephen Harper, many Canadians can better empathise with those living under the rule of fear.

Many progressives suspect that Justin Trudeau may not turn out to be the Disney prince at all.