The Kabul regime is in a state of panic over the Taliban’s current offensive which led to the first major city to fall into their hands since 2002, the capture of a dozen district headquarters and the group’s extensive territorial gains across the country. The situation has further increased the outflow of young Afghans joining the migrant rush to reach Germany.

However, even more terrifying for ordinary Afghans is the flow of statements by Afghan leaders and media reports that waiting in the wings is an even worse catastrophic and powerful force – the Islamic State of Iraq and the Levant (ISIL).

Afghan and foreign media reports claim that ISIL is making steady military gains capturing territory, recruiting Taliban fighters to their cause, spending large amounts of cash while carrying out horrendous punishments for those opposing them.

Afghan President Ashraf Ghani has frequently warned his Western backers that ISIL poses the next major threat to Afghanistan.

The reality is that the Afghan battlefield has become much more complicated and bloody since the disclosure in July that Taliban leader Mullah Mohammad Omar had died two years ago and the leadership was being manipulated by his deputy Mullah Akhtar Mohammed Mansoor.

ISIL immediately presented itself as an alternative to Mullah Mansoor’s leadership who was controversially elected as the new Taliban leader. Dissident hardline factions of the Taliban have either refused to accept him or only paid lip service to his leadership; they believe he is being imposed upon them by Pakistan, they oppose the idea of peace talks with the Kabul regime, and they resent the power now wielded by the Alizai Pashtun tribe to which Mansoor belongs.

So far, however, ISIL has been led by minor disgruntled Taliban figures who first made their disaffection known in January 2015. In a propaganda video released soon after they pledged allegiance to ISIL, a little-known former Talib, Hafiz Saeed Khan, was appointed by ISIL as the governor of the newly named Khorasan Province that includes Pakistan, Afghanistan and parts of Central Asia.

His deputy, Mullah Abdul Rauf Khadim from Helmand province in the south, was soon killed by a US drone strike while ISIL recruiting cells were also set up in Farah province in the west and in northern Afghanistan.

Moreover, significant Central Asian groups such as the Islamic Movement of Uzbekistan (IMU), which had been devotedly fighting for the Taliban for two decades, decided to pledge loyalty to ISIL, although that did not stop them from joining the Taliban in their assault on Kunduz.

After Kunduz, more and more dissident Taliban groups decided to stick with Mullah Mansoor's leadership rather than switch to ISIL.

ISIL’s largest gains have been only in one province – Nangarhar, which borders Pakistan. Here, there is an active civil war ongoing between the Taliban and former Taliban, who have switched sides to join ISIL.

This fighting has less to do with ideological reasons than it has to do with control of the lucrative trade and smuggling of goods, money laundering, and most significantly, heroin that passes through the provincial capital Jalalabad to Peshawar and onwards to Western Europe. Jalalabad became a drugs transit centre in the early 1990s, even before the Taliban emerged.

These dissidents’ real opportunity for expanding their narrow power base came in August after the debacle in the Taliban leadership, but this was quickly covered over by the remarkable Taliban success in seizing Kunduz and holding it for two weeks. After Kunduz, more and more dissident Taliban groups decided to stick with Mullah Mansoor’s leadership rather than switch to ISIL.

Moreover, in June – after a long hiatus – al-Qaeda rejuvenated itself by creating ”al-Qaeda in the Indian Subcontinent”, with elements drawn from the Taliban and the multiple Pakistani groups based in Punjab, who fought in Indian Kashmir or been a part of al-Qaeda in the past. Mullah Mansoor also pledged allegiance to al-Qaeda leader, Ayman al-Zawahiri.

ISIL now has competition from both the rejuvenated Taliban and al-Qaeda. Mullah Mansoor wrote a blistering letter to ISIL leaders in Baghdad in June telling them to stop interfering in Afghanistan and that ”jihad against American invaders and their slaves in Afghanistan must be under one flag, one leadership and one command”.

Many Taliban fear being taken over once again as they were by the Arabs during the time of Osama bin Laden's friendship with Mullah Omar.

There are deep tribal, religious and traditional impediments for ISIL to make headway in Afghanistan. The Taliban have been around since 1993, and even earlier for those who fought with the mujahideen against the Soviets. They are not about to surrender their aims and longevity to outsiders such as ISIL.

Many of them resented the presence of Arab fighters under Osama bin Laden and they are not about to give up their history and pedigree of fighting under their own leaders for ISIL’s sake.

Nor are Taliban leaders with their extensive sources of income, property and businesses in Pakistan; and their tribal and ideological following are not about to give up their privileged positions to outsiders.

Many Taliban fear being taken over once again as they were by the Arabs during the time of Osama bin Laden’s friendship with Mullah Omar. By coming under the leadership of ISIL, they would once again be under Arab tutelage.

They had sworn an oath of loyalty to Mullah Omar, and now to Mullah Mansoor, who has been bestowed the same title that was given to Mullah Omar – Amir al-Mu’minin (Commander of the Faithful). They cannot, at the same, time recognise Abu Bakr al-Baghdadi as their leader and caliph.

The Taliban are also not global jihadists. They have never spoken of creating a global caliphate, although they do want an Islamic Afghanistan ruled by sharia law. Their ambitions have always been far more limited than either al-Qaeda or ISIL, which is precisely what makes some of them amenable to talks and reconciliation. It would be difficult to imagine trying to reconcile with a global jihadist.

ISIL’s litany of atrocities in Nangarhar province – such as blowing up prisoners with explosives and raping women – have led to a backlash among many Afghans. Even though ISIL has considerable wealth at its disposal to recruit disgruntled Taliban, the Taliban remain entrenched as a movement of religiously inspired Afghans who have fought off foreign invasion when ISIL did not even exist. 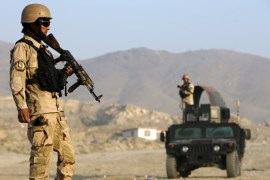