Since the 1970s, Muslims have repeatedly been stereotyped in the US as dangerous terrorists. But, over the last six years, a new fear of Muslims has gradually entered the conservative mainstream: that Muslims are taking over the United States and imposing “sharia law”.

In 2011, Republican Congressman Allen West called Islam a “fifth column” that had infiltrated US institutions. In a 2010 speech in Washington, Newt Gingrich described sharia as “a mortal threat to the survival of freedom in the United States”.

Another candidate, Herman Cain, condemned what he called the “attempt to gradually ease Sharia law and the Muslim faith into our government”, and said he would introduce a special loyalty test for Muslims wanting to serve in his administration. Another US Representative, Michele Bachmann, declared that sharia “must be resisted across the United States” and demanded national security officials investigate Muslim Brotherhood infiltration into the federal government.

Such fears are paranoid and lack any basis in reality. No significant Muslim organisation has called for sharia in the United States. For most devout Muslims in the US, sharia is a personal, moral code rather than a political programme.

Nevertheless, many conservatives view an imminent Islamic takeover as a real danger. The current leaders in the 2016 Republican presidential field are playing on that fear. Donald Trump and Ben Carson have both made anti-Muslim comments in the last two weeks.

On NBC’s Meet The Press show broadcast earlier this month, retired neurosurgeon Carson said: “I would not advocate that we put a Muslim in charge of this nation. I absolutely would not agree with that.”

Also read: An invasion without invaders

A few days earlier, during a question and answer session at a New Hampshire campaign rally, a Trump supporter said: “We have a problem in this country. It’s called Muslims.”

The aim of this propaganda is to popularise an anti-Muslim version of the anti-Semitic conspiracy theories that began to circulate a century ago.

A recent poll in Iowa found only around half of Republicans thought Islam should be legal in the United States. Forty-three percent of Republicans believe Obama is Muslim, according to a CNN poll. These attitudes are not simply a spontaneous reaction to 9/11. After all, this kind of rhetoric only really got going several years later. Nor are they a reaction to the rise of the Islamic State of Iraq and the Levant (ISIL).

Beyond the headlines lies an organised and well-funded propaganda campaign. According to an investigation by the Center for American Progress, seven conservative foundations spent over $40m on anti-Muslim propaganda between 2001 and 2009. Others estimate the amount spent is over $100m.

Among the groups funded is Brigitte Gabriel’s ACT! For America, which has 170,000 members and models itself on the highly successful National Rifle Association.

The aim of this propaganda is to popularise an anti-Muslim version of the anti-Semitic conspiracy theories that began to circulate a century ago. Like anti-Semitism, Islamophobia is not only about hatred. It is also an ideology that seeks to connect with people’s social, economic, and political frustrations and advocate a course of action, even if the explanation and the action are based on falsehoods.

Clearly, no national problems can plausibly be blamed on Islam. To have any effect, Islamophobic ideology needs a conspiracy theory that says the US is, despite appearances, secretly run by Muslims. Muslims can then be portrayed as a hidden force preventing American renewal. The message is a convenient one for the US ruling elite: don’t blame the people who actually run the US, just smell the sharia.

To the Islamophobe, the US government is not what it seems. The Muslim Brotherhood has placed a Muslim in the White House and is implementing its secret sharia plan. It begins with school textbooks in Texas trying to present Islam in a positive light, Campbell’s bringing out a halal version of its iconic soups, or the Obama White House refusing to use the phrase “Islamic terrorism”.

Then, one day, Americans will wake up to an Islamic government. Europe, with its larger Muslim population, has already succumbed: It is now Eurabia, an Arab colony; London has already become Londonistan.

A century ago, America’s Jews were likewise seen as infiltrators threatening Western values. Central to US anti-Semitic ideology was also a conspiracy theory that presented Jews as secretly pulling the strings of international finance and world revolution. Henry Ford, for example, used the pages of his Dearborn Independent newspaper to propagandise such views in the 1920s.

The modern discourse over Muslims today resembles the manner in which Jews were talked about then. In both cases, a religious minority is seen as a dangerous underclass destroying society from below with their alien values, as well as a hidden force secretly controlling the world from above, through their infiltration of centres of power.

American Jews were eventually able to overcome the worst anti-Semitism of the 20th century and establish security and equality in the US. Will Muslims be able to do the same? Unfortunately, history never repeats itself in the same way. The key difference is that, today, widespread anti-Muslim fears among the public provide a justifying pretext for a global US empire that did not exist in the 1920s. Islamophobia is not just an irrational fear, but a belief system that is useful to sections of power.

Opposing anti-Muslim conspiracy theories and all of their accompanying rhetoric are not just about defending the civil rights of Muslims in the US. It is also about removing one of the ideological supports of US imperialism.

Arun Kundnani is the author of The Muslims are Coming! Islamophobia, Extremism, and the Domestic War on Terror and teaches at New York University. 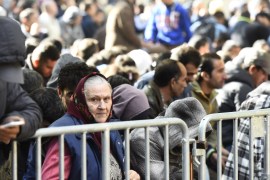 An invasion without invaders

Across Europe, conservatives are wrong when they stoke fears of an Islamic invasion. 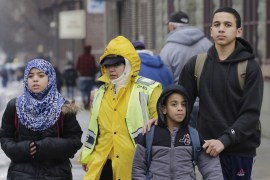