On the night of October 19, Canada’s international image went from hard-hearted to heart-throbbing.

That’s because Justin Trudeau swept into power – and swept the world off its feet. The Internet melted.

“Canada’s new prime minister is so bangable Americans might start caring about Canadian politics,” growled one US website.

The popular E! Online website declared Trudeau to be a “smoking-hot syrupy fox“.

UK’s the Mirror asked: “Is Justin Trudeau the sexiest politician in the world?”

And those are just the printable lines. Meanwhile social media exploded with people tweeting photos of the 43-year-old Liberal Party leader, bare-chested, comparing him to Disney princes, performing a striptease for charity, besting a Conservative senator at boxing, balancing babies on the palms of his hands, posing for selfies with voters, kissing, hugging, on the beach, on a unicycle, on the rugby field and kicking Prime Minister Stephen Harper out of office.

At least two hashtags trended last week: #DaddyTrudeau for how he began his election night victory speech by addressing his children and the NSFW (or XXX-rated) #PILF.

Justin Trudeau has pressed more flesh to press his political advantage than any politician in Canadian history – except perhaps for his late father. As close to royalty as this country has ever seen, he is the first-born son of the late Prime Minister Pierre Elliott Trudeau (1968-1979, 1980-1984) and Margaret Sinclair, whose antics in the cocaine-fuelled 1970s scandalised the country.

Also read: Canada as the world knew it

Pierre, a bachelor when he became Liberal Party leader, ignited the first wave Trudeaumania. For the first few years of his leadership, he cut a dashing figure in a cape, always a rose in his lapel and a beautiful woman on his arm. Girls screamed, mobbing him as if he were a rock star.

And, in the political world, he was. He lifted restrictions on contraceptives and decriminalised abortion and homosexuality, declaring: “There’s no place for the state in the bedrooms of the nation.”

He faced down Quebec separatists – and won. He gave Canada a constitution and a charter of rights and freedoms. He communed with the likes of Cuba’s Fidel Castro and playfully twirled behind Queen Elizabeth’s back.

He was fierce, witty, and mischievous but, ultimately, he divided the country, east versus west. Alberta was alienated by his National Energy Program which, in effect, nationalised parts of the oil industry. Quebec despised him for refusing to recognise it as a distinct nation.

Arguably, Trudeau Sr’s actions led to the creation of Stephen Harper’s government. For example, where Trudeau made a virtue of Canada’s ethnic diversity and multiculturalism, Harper passed laws that limited immigration. Perhaps most infuriatingly, many of his bills would be struck down by courts that referenced Trudeau’s charter in their decisions.

Now Justin has brought us Trudeaumania 2.0.

Born on Christmas Day, he grew up in the public eye, travelling with his father and shaking hands with world leaders. While he may not have the deep intellect of Trudeau Sr, he certainly can boast of significant political smarts.

Throughout the 78-day-long election campaign, the longest in modern Canadian history, his team knew when to parry and thrust and when to sheath the sword, allowing former opposition leader Thomas Mulcair of the left-of-centre New Democratic Party to stab himself in the foot.

So, when Mulcair made it his mission to fight the xenophobic Conservatives on their immigration policies and anti-niqab pronouncements, Trudeau went positive, embracing women in hijab, focusing on bread-and-butter issues and countering Conservative claims that he was too inexperienced to govern.

Harper’s campaign spent millions of dollars to run and re-run TV ads claiming that Trudeau was “just not ready” but he had “nice hair”.

As if there were nothing beneath it.

And so, Canadians, disgusted by the icy and ideology-bound Harper, came out to vote like they hadn’t in decades. Turnout was the highest since 1993.

Also read: Will Trudeau’s victory make a change in Canada?

Driven by Harperphobia just as much as Trudeaumania, it was a total turnaround. Although the Liberals were running third until the very last few days of the campaign, in the end, they won 184 seats, the Conservatives 99 and the NDP, which started out on top in the polls, placed third at 44.

Now Trudeau is resettling his wife Sophie Gregoire and their three children in Ottawa and appointing a cabinet made up of many new MPs. Meanwhile, Canada is still – mostly anyway – in a honeymoon phase. They think they have their happily ever after.

But too many dark years of Harper – with his embarrassing foreign policy, his undermining of women’s rights, his lack of respect for First Nations and hundreds of missing and murdered Indigenous women, his dismantling of environmental regulations and his gutting of science libraries – will soon render Canadians impatient to see their country return to the kinds of values that they believe, rightly or wrongly, this country stands for.

Problem is that, as many progressives suspect, Justin Trudeau, who wants to push pipelines through forests and who supported Harper’s anti-terrorism bill which was denounced by legal scholars as unconstitutional, may not turn out to be a Disney prince at all.

He could just be the toad in disguise. 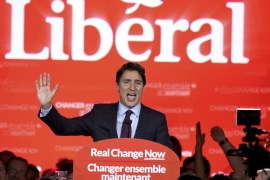 Will Trudeau’s victory make a change in Canada?