For decades, the United States has dominated Asian waters, with its colossal navy roaming vital waterways with impunity. The US navy has been both domineering and benign for its allies, supporting armed interventions and maintaining access to military bases across continents, as well as protecting maritime arteries of trade against state and no-state predators.

With as much as 90 percent of global trade conducted through maritime routes, all countries have an interest in ensuring freedom of navigation across international waters. And for a long time, the US and its allies have served as the de facto guarantor of unimpeded access to global sea lines of communications.

The Soviet Union’s earlier efforts to challenge American naval supremacy ended up bankrupting its fragile economic base, paving the way for its eventual collapse in the late 20th century.

A new naval powerhouse, however, is gradually upending the US-led international maritime order. Confident about its continental borders, and equipped with a burgeoning blue-water naval capability and a wide array of asymmetrical weaponries, China has gradually restricted US naval access to the key international waterways in East Asia. From the Yellow Sea to the East and South China Seas, Chinese paramilitary and military forces have progressively challenged US naval presence in China’s adjacent waters.

In the South China Sea, in particular, China has built a sprawling network of military facilities and airstrips on a whole host of artificially-created islands, which can serve as the forward deployment base for Chinese military power projection in the area.

Under pressure by domestic hawks and perturbed allies, which don’t want to see the South China Sea turning into a “Chinese lake”, the Obama administration has decided to push back more aggressively against Beijing’s maritime assertiveness. But its recent deployment of surveillance vessels close to Chinese-created islands runs the risk of escalation and outright conflict.

In his 1897 book “The Interest of America in Sea Power”, Alfred Thayer Mahan, the pre-eminent 19th-century naval strategist argued that the control of the sea, whether through maritime commerce and/or naval muscle, will translate into “predominant influence in the world; because, however great the wealth product of the land, nothing facilitates the necessary exchanges as does the sea.”

China's activities don't only violate international law, which proscribes the permanent alteration of disputed features, but they also pose a serious threat to other claimant states and freedom of navigation in the area.

For Mahan, to become a great power, a country should first dominate its adjacent waters in order to create a zone of deference and keep away external powers from its peripheries. Today, China seems to be following Mahan’s doctrine, aiming to dominate adjacent waters.

China has also repeatedly sought to restrict the US naval deployment and reconnaissance operations in the area, culminating in a collision between a Chinese jet fighter and a US EP-3 signals intelligence aircraft in the South China Sea back in 2001.

More recently, Chinese jet fighters and paramilitary forces have harassed US aircraft and vessels in the area. In the East China Sea, where China and Japan are locked in a bitter dispute over the Senkaku/Diaoyu islands, Beijing has imposed an “Air Defense Identification Zone” (ADIZ), which compels other countries to seek its permission before passing through.

In the South China Sea, the past two years have seen China reclaiming 1,170 hectares of artificial land, transforming low-tide elevations, atolls, and rocks into full-fledged islands.

China’s activities don’t only violate international law, which proscribes the permanent alteration of disputed features, but they also pose a serious threat to other claimant states and freedom of navigation in the area, especially as Beijing further militarises the disputes by deploying an ever-larger armada of conventional and paramilitary forces to the area.

Taking on the dragon

Unlike Western maritime powers, such as the Netherlands in the past and the United States more recently, China is not only seeking to dominate adjacent waters, but it is also treating them as an extension of its continental territory – its “blue soil“.

In clear contravention of the United Nations Convention on the Law of the Sea (UNCLOS), which doesn’t accord coastal states a claim over international waters, China is claiming “inherent” and “indisputable” sovereignty over much of the South China Sea under its notorious “nine-dash line” doctrine.

Determined to hold onto its naval supremacy, and prevent the emergence of a Chinese “lake” in the area, the US has upgraded its security alliances with its Asian allies, negotiated greater rotational military access in the area, and enlisted the support of Japan and Australia for joint patrols against China.

During a mid-October meeting with their Australian counterparts, Secretary of State John Kerry and Defense Secretary Ash Carter announced that the US will effectively challenge China’s sovereignty claims in the area by conducting “freedom of navigation” operations within the 12-nautical-mile radius of China’s artificially-created islands. By late-October, the US began deploying USS Lassen (a guided-missile destroyer) to conduct the freedom of navigation operations.

Washington and its allies argue that since most of those land features were artificially carved out of low-tide elevations, they can’t, based on the UNCLOS, generate any maritime entitlements of their own. China has lashed back, warning: “There is no way for us to condone infringement of China’s territorial sea and airspace,” raising the risk of military escalation in the area.

Much will depend on how regularly and aggressively the US will challenge China’s sovereignty claims. With the global media zooming in on the impending Sino-American maritime showdown, China’s nationalist leaders are also under tremendous pressure to display resolve and defiance. Asia is at a critical juncture. 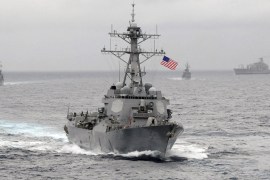 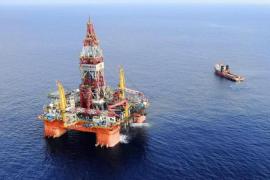 China decided to withdraw its oil rig from contested waters, but there is little sign of any genuine