On August 28, a 17-year-old citizen of El Salvador became the country’s first person to be sentenced for “acts of terrorism” on account of his association with alleged gang activity, the Spanish news agency EFE reported. Identified only as Antonio N, the teenager was accused of attacking a group of police with a handmade weapon.

In El Salvador, it is customary to refrain from publishing the full names of minors charged with crimes, but classifying them as terrorists is apparently acceptable.

The case was a litmus test for a new ruling. Four days prior to Antonio N’s sentencing, the Salvadoran Supreme Court had decreed that gang membership was now punishable under the 2006 Special Law Against Acts of Terrorism, which can set prison sentences of up to 60 years.

The law has been trotted out on various occasions. A former administration used it to charge protesters at a 2007 demonstration against the privatisation of water systems. In this case, “terrorism” amounted to blocking roads and throwing stones.

Following the new supreme court decision, both the state and police have been having a field day with additional arrests. Last month, 231 people were taken into custody at a dance party in the city of Apopa, north of the capital San Salvador, where, the Salvadoran online newspaper La Pagina reported, the musical entertainment had included songs “alluding to gangs”.

Despite efforts by El Salvador’s chief prosecutor, Luis Martinez, to place terrorism charges against the detainees from Apopa, all were subsequently released – with nearly half of them reportedly set to be tried in freedom via regular court appearances.

According to La Pagina, the accused are still not immune from eventual sentencing as terrorists.

But this, of course, is only the judicial side of the system: The war on the street portends far bloodier consequences.

As recent history has amply shown, anti-terror wars generally have the opposite of the desired effect – encouraging rather than discouraging terrorism – while often managing to terrify entire populations.

One needs look no further than the rise of the Islamic State of Iraq and the Levant (ISIL), or the fact that civilians in more than one country live in fear of US drone strikes.

With its tough on crime rhetoric, the Salvadoran government is now giving the police – already accused of widespread brutality – the notion that they have been promoted to the front-lines of a global clash between good and evil.

This is not the surest way to enshrine either civil liberties nor public safety.

El Salvador's clampdown on the violence which has engulfed the country ignores recent history. The US has a lengthy past of backing right-wing terror groups in Latin America, particularly during the Cold War.

Mass arrests are not the only indicators of potential violations of rights. On September 2, the official Twitter account of the Salvadoran Supreme Court tweeted the news – twice in a row – that an appeal for habeas corpus had been rejected for persons being held on suspicion of “acts of terrorism”. This would include gang members.

Public safety has been in short supply in El Salvador following last year’s collapse of a truce between the country’s two main gangs: Barrio 18 and Mara Salvatrucha (MS-13).

El Salvador has now overtaken Honduras as the homicide capital of the world, with more than 900 murders in August alone – an average of 30 per day. The number of gang members in El Salvador is estimated at around 70,000.

But the state’s heavy-handed response is flawed since it fails to address the injustices that drive gang involvement: poverty, vast socioeconomic inequality, and the government’s inability to adequately provide for the needs of its citizens.

A communique from the office of Salvadoran President Salvador Sanchez Ceren quotes him enthusiastically endorsing the supreme court decision, particularly the idea that “the full force of the law” will be unleashed, not only against gang members, but also against collaborators.

In following in the anti-terror footsteps of the US, El Salvador is far from alone.

Neighbouring Guatemala has bullied activists promoting indigenous rights with accusations of terrorism, while Honduras has not only dabbled with anti-terrorist legislation aimed at criminalising dissent but has also invented ties between Central American gangs and al-Qaeda.

Back in 2004, Honduran Security Minister Oscar Alvarez announced that gang members were helping terrorists infiltrate the US – an allegation lacking any sort of evidence whatsoever, but fully exploited by fearmongers in the latter country.

To onlookers, El Salvador’s clampdown on the violence which has engulfed the country ignores recent history. The US has a lengthy past of backing right-wing terror groups in Latin America, particularly during the Cold War.

In the Salvadoran theatre of this struggle against international leftism, US support for right-wing security forces and death squads translated into some 40,000 political murders between 1980 and 1992.

Salvadoran commentator Marvin Aguilar recently recalled that, during this time, the “terrorist” label was deployed against none other than the leftist Farabundo Marti National Liberation Front (FMLN) – currently the governing party of El Salvador.

In an article for Telesur English, Busch warns of a self-fulfilling prophecy: The gangs, banned from negotiations with the government and with nothing left to lose, will have no reason not to “liv[e] up to the ‘terrorist’ stereotype”.

In Busch’s view, the “real insidiousness” of the Salvadoran Supreme Court decision lies in its “straight jacketing [of] the country into a war on terror without a foreseeable end”.

What is foreseeable, on the other hand, is yet another era of death and displacement. 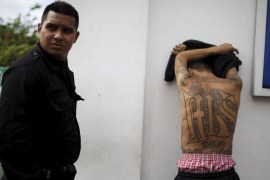 The failure to tackle corruption and insecurity undermines the ruling party’s social programmes. 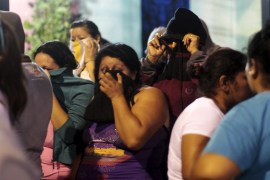 From the Twitter trenches: The Israeli army’s propaganda war