British Finance Minister George Osborne’s China trip last month was designed to make an impact on his hosts – the chancellor was accompanied by six ministers, local government leaders from the north of England, and a business delegation.

The visit saw a clear focus on further expanding the two countries’ trade and investment flows, alongside effusive rhetoric about the UK-China relationship, which looks to be in a good state.

This rhetoric, with its repeated references to “partnership”, was cloaked in the language of bilateral relations. But coming six months after, London’s influential announcement that it would apply to be a founding member of the new Chinese-promoted Asian Infrastructure Investment Bank (AIIB), an announcement that emanated from Osborne’s ministry, the visit was as much a statement about global trends as the bilateral relationship.

The messages Osborne delivered suggest that he “gets” the rise of China – that the country has already become a major global economic power, and that Beijing matters in global governance, particularly in the economic sphere.

The global financial crisis and the recent establishment of AIIB have, one way or another, marked symbolic steps in this process.

Positioning the UK to benefit from this changing global power distribution is in the tradition of hard-headed pragmatism in British foreign policy, epitomised by the oft-quoted remark of Lord Palmerston that it is one’s interests – not friends – which are permanent.

However, as well as criticising Osborne for downplaying human rights issues, some commentary has asked whether this approach takes full account of global challenges. Put another way: Although the UK might look as if it is positioning itself well for a Chinese century, what happens if the future isn’t that clear-cut?

While acknowledging the extent of China’s rise, healthy scepticism about the future is in order. In the Asia-Pacific region itself, for example – as argued in a recent Chatham House paper – the coming decade is likely to feature power distributed between multiple actors, including the US, with none – including China – able to dominate the region.

... the ideas espoused by some that the UK should rely on 'core friendships' with traditional partners in North America and Europe, or seek 'values-based' relationships in Asia, are not sufficient to deal with the complexity of a changing world.

All of this provides the backdrop for Chinese President Xi Jinping’s state visit to the UK.

The bilateral UK-China relationship will inevitably be talked up during this visit, but it will also be a platform for a message from the UK about China’s place in the world. And we will see to what extent Osborne’s tone and approach are echoed right across the UK government.

One factor in getting this message right is consideration of Chinese perspectives. A few points are worth noting:

First, Chinese rhetoric does not echo the hard-headed realism of Palmerston, but instead, gives pride of place to relationships, not interests.

For example, Xi said in his speech to the United Nations on September 28 that justice should be put before interests, though British and Chinese perceptions of what this means may not yet be aligned.

Secondly, Xi’s state visit to the UK comes hot off the heels of his September trip to the US, and Chinese analysts will be highlighting the differentiation between the UK and US when it comes to China.

London has not shied away from these given differences between UK and US interests or the UK’s greater openness to a world where the US is not the sole dominant power. But in response, London will need to get the balance right.

Thirdly, it is clear that Chinese policymakers would like the UK to remain in the European Union, though Chinese comments on this are likely to remain low-key. The sustainability of a turn to China in British diplomacy would be enhanced substantially by improved relations between the UK and the rest of Europe.

The heart of diplomacy is to balance a complex web of interests and values with the demands of domestic politics, to position a country for the likeliest future, while hedging against risks. In sending a message about China’s place in the world, London will need to find the right balance and avoid any tendency to slip into one-dimensional economic rhetoric.

But neither is the balance simply between security risks and economic benefits of closer relations with China: The UK’s greatest security threats at the moment seem to be economic in nature or to be coming from the European periphery, not Asia.

Consequently, the ideas espoused by some that the UK should rely on “core friendships” with traditional partners in North America and Europe, or seek “values-based” relationships in Asia, are not sufficient to deal with the complexity of a changing world.

What is needed is not just a clear overarching narrative for the UK’s relations with China, but a more balanced and subtle diplomacy that reflects the changing distribution of power in the world.

Xi’s forthcoming visit to London provides an opportunity to deliver this.

Tim Summers is an Adjunct Assistant Professor at the Centre for China Studies at The Chinese University of Hong Kong. 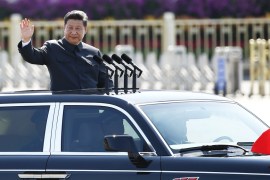 The event was calculated to make a strong impression on both the domestic and international audiences.