Looking ahead, it is clear that this year promises to be a pivotal year for Turkey. Regarding the Armenian issue, Turkey will face an unprecedented challenge as the 100th anniversary of the Armenian genocide will be marked by a symbolically significant series of commemorations throughout the world. Given the emotional power of the centenary, only amplified by commemorative events in both Armenia and Turkey, the Turkish government will be hard pressed to maintain its official policy regarding the Armenian genocide.

Given that backdrop, it seems clear that the Turkish government will seek to “weather the storm” of 2015, and only after the commemoration passes, consider returning to the process of diplomatic engagement with Armenia.

Nevertheless, there are some smaller steps that each side can take to ensure that the broader political environment is conducive to a return to the “normalisation process”. Perhaps in light of this realisation, in recent weeks, there has been a sudden and dramatic exchange of diplomatic messages between Ankara and Yerevan.

First, in a message from the Turkish government, the Armenian president was extended a rare invitation from his Turkish counterpart, to attend a special ceremony marking the 100th anniversary of World War I’s Gallipoli campaign. Although the invitation was one of more than 100 such invitations to world leaders, some have welcomed the move as a new diplomatic opening for the stalled process of “normalisation” between Turkey and Armenia.

The bad timing stems from the Turkish decision to hold its own Gallipoli commemoration on the same day as Armenians around the world mark the anniversary of the start of the Armenian genocide in 1915.

And with Ankara’s invitations to over 110 world leaders, it seems poised for a duel with Yerevan, which is gathering its own roster of international guests to come to Armenia on the same day for its genocide remembrance ceremony.

For his part, the Armenian president had little choice but to reject the invitation, and reminded his Turkish counterparts of his own standing, but unanswered invitation to visit Armenia for the same time, which he had extended much earlier.

It was against this background of dueling ceremonies that Armenia’s president issued an immediate rebuttal to his invitation from his Turkish counterpart. A second, apparently follow-up message was then delivered by Turkish Prime Minister Ahmet Davutoglu, calling on “all Armenians, and invite all those who believe in Turkish-Armenian friendship to contribute to a new beginning”.

The offer, coinciding with the eighth anniversary of the tragic murder of respected journalist Hrant Dink, embraced a spirit of commemoration and tragedy that was “guided by the seeds of friendship he sowed, we wish to open new paths into hearts and minds”.

Many have rejected Davutoglu’s approach of focusing on the “events of 1915” and “the inhumane consequences of the relocation policies essentially enforced under wartime circumstances”, and dismissed his concept of “shared pain” as an unacceptable and dangerous equivalence between the victims and the perpetrators of the genocide.

Yet both the April 2014 statement by then-Prime Minister Recep Tayyip Erdogan and this recent statement by Davutoglu, deserve a response. First, the Erdogan statement on the Armenian genocide surprised many. Although the statement clearly did not go far enough, it was both unexpected and unprecedented. That statement not only offered a “safer space” within which to discuss the genocide issue, it also broadened the constituency for dialogue by sending a message not only to Armenians but also to Erdogan’s own base of supporters.

It also established an important new precedent, whereby every Turkish prime minister will be expected to make a similar statement timed with each April 24 commemoration of the Armenian genocide.

Each declaration not only offers and expands the space for dialogue and engagement, but also helps to at least “sustain the momentum” and to foster a new environment more conductive for both sides to re-engage.

Nevertheless, looking back, diplomatic engagement has been meagre and marginal, with no follow-up and little follow-up to the December 2013 visit by then-Foreign Minister Ahmet Davutoglu in what was the first high-level visit from Turkey to Armenia in five years.

And in a move by the Armenian side, the decision by Armenian Foreign Minister Eduard Nalbandian to attend Erdogan’s August 2014 inauguration ceremony was important. The presence of the Armenian foreign minister was significant, despite the fact that Turkey has yet to establish diplomatic relations or open the closed border with Armenia.

There are still signs of hope, but only once the centenary of the Armenian genocide passes. Equally significant will be Turkey’s coming June elections, which may offer a fresh opening for a more self-confident Turkey to re-engage with Armenia.

At the same time, the future of both Turkey’s broader regional policy and its more specific policy towards Armenian-Turkish normalisation are ever more hostage to the outcome of domestic Turkish politics. 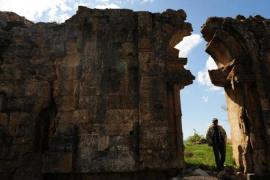 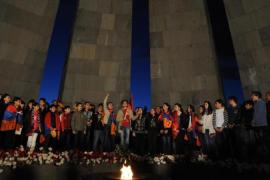 The US Senate and the Armenian genocide

Is a show of support by the US Senate helpful to the Armenians’ cause?