Over the past several years the role of social media in promoting, organising, and responding to protest and revolution has been a hot topic of conversation. From Occupy Wall Street to the Arab Spring revolutions, social media has been at the centre of many of the largest, most popular demonstrations of political involvement. The protests taking place in Turkey add to this growing trend, and are already beginning to add new layers to our understanding of how social media can contribute to public participation.

Protests have been ongoing since early this week in Istanbul’s Taksim Square. Organised in response to government plans to tear down the green space in the centre of the square and replace it with a shopping centre, the protests have morphed into a more visceral expression of the general discontent with the government’s policies over the last several years. In response, the police fired massive amounts of tear gas and pepper spray into the crowd and set fire to tents set up for protesters to sleep in, leaving several people injured. Protesters have begun wearing homemade gas masks while continuing to protest on the street.

The social media response to and the role of social media in the protests has been phenomenal. Since 4pm local time yesterday, at least 2 million tweets mentioning hashtags related to the protest, such as #direngezipark? (950,000 tweets), #occupygezi (170,000 tweets) or #geziparki (50,000 tweets) have been sent. As we show in the plot below, the activity on Twitter was constant throughout the day (Friday, May 31). Even after midnight local time last night more than 3,000 tweets about the protest were published every minute. 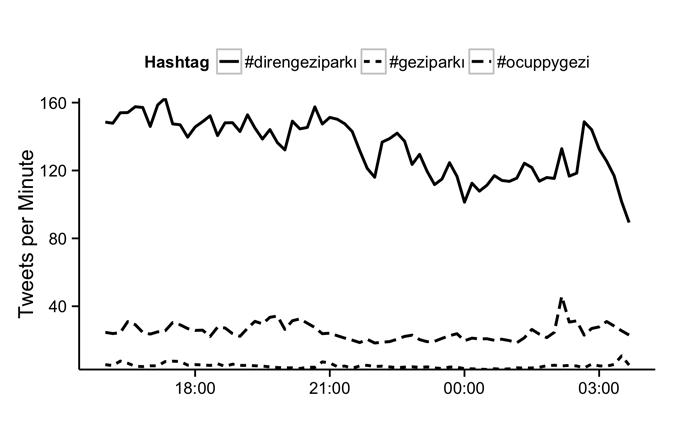 What is unique about this particular case is how Twitter is being used to spread information about the demonstrations from the ground. Unlike some other recent uprisings, around 90 percent of all geolocated tweets are coming from within Turkey, and 50 percent from within Istanbul (see map below). In comparison, Starbird (2012) [PDF] estimated that only 30 percent of those tweeting during the Egyptian revolution were actually in the country. Additionally, approximately 88 percent of the tweets are in Turkish, which suggests the audience of the tweets are other Turkish citizens and not so much the international community. 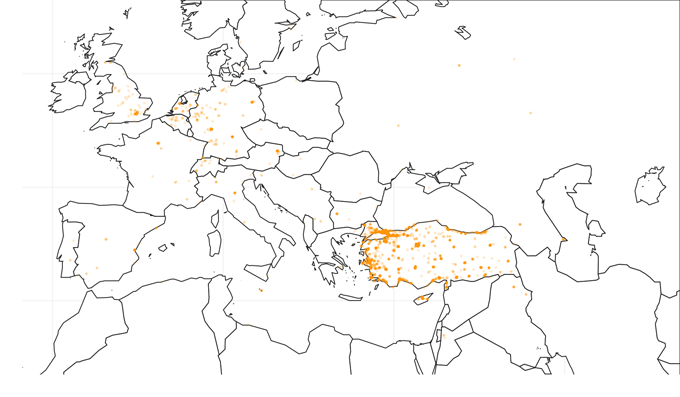 These numbers are in spite of the fact that there are reports that the 3G network is down in much of the area that is affected. Some local shops have removed security from their WiFi networks to allow internet access, but almost certainly the reduced signal will have impacted the tweeting behaviour of those on the ground.

Part of the reason for the extraordinary number of tweets is related to a phenomenon that is emerging in response to a perceived lack of media coverage in the Turkish media. Dissatisfied with the mainstream media’s coverage of the event, which has been almost non-existent within Turkey, Turkish protesters have begun live-tweeting the protests as well as using smart-phones to live stream video of the protests. This, along with recent articles in the Western news media, has become a major source of information about this week’s events. Protesters have encouraged Turks to turn off their televisions today in protest over the lack of coverage of the mainstream media by promoting the hashtag #BugünTelevizyonlar?Kapat (literally, “turn off the TVs today”), which has been used in more than 50,000 tweets so far.

What this trend suggests is that Turkish protesters are replacing the traditional reporting with crowd-sourced accounts of the protest expressed through social media. Where traditional forms of news have failed to fully capture the intensity of the protests, or to elucidate the grievances that protesters are expressing, social media has provided those participating with a mechanism through which not only to communicate and exchange information with each other, but essentially to take the place of more traditional forms of media. Further, this documentation through multiple sources in public forums serves to provide a more accurate description of events as they unfold. The coming days in Turkey will give us more insight into the processes by which this takes place, but it is certainly an impressive realisation of the potential for social media to be used in overcoming barriers to diffusion of information regarding and motivation for protests.

This article was produced using research conducted by New York University’s Social Media and Political Participation (SMaPP) laboratory in the past 24 hours.

A version of this article first appeared on The Monkey Cage.