Warsaw’s main boulevard, Marszalkowska, and neighbouring areas turned into a war zone on the Independence Day March on November 11. Row after row of mostly male youth marched along the boulevard spilling into sidewalks and side streets.They carried flags with Celtic crosses and white power fists, chanted slogans with visceral force and filled the centre of the city with fire-cracker smoke. The parade, with the number of protesters set at around 15,000, was organised by two of the most prominent far-right organisations in the country, the All-Polish Youth and the National-Radical Camp.

Few passers-by dared to stick around and watch the spectacle.

Within one hour of the start of the demonstration, participants had attacked two squats in the centre of Warsaw (Syrena and Przychodnia) and burnt down a rainbow installation in Plac Zbawicela, an artistic installation standing for diversity. After about two hours of marching and attacking the Russian embassy, the Polish police asked that the permit for the march be cancelled.

The aggression which spilled through the streets of Warsaw is not an isolated event. It marks the steady rise of the far right in Polish politics and society which so far has not been addressed by the authorities and faces only sporadic resistance from parts of the general public.

“Extremists on both sides”

An Independence March has been organised yearly since 1989 on November 11, Poland’s Independence Day, when people celebrate renewed statehood achieved in 1918 after the Polish lands had been partitioned for more than a century by Russia, Prussia and Austria.

In 2010, however, the march became a major social event and its history since speaks volumes about Polish society. That year, Polish liberals and leftists spoke out[Pl] strongly against the exacerbated nationalist and far-right overtones of the march and planned for a block (eventually successful). Much of Poland’s conservative media depicted the planned blocking of the march as an attempt to stifle natural expressions of patriotic feeling. As a consequence, thousands attended what used to be a much smaller Independence March, as the far-right ranks were thickened by more moderate conservatives and nationalists.

The anti-fascists blocked the march again in 2011, when the numbers in the Independence March grew bigger. That year tens of people were injured and around 200 people arrested, with the bulk of the violence coming from the side of the far right. Yet much of the Polish media insisted on depicting the aggression as coming from “extremists on both sides”, i.e. the far right and the anti-fascists. The Independence March, according to most of the media, was an event during which good Polish patriots celebrated their nation while small groups of extremists committed wrongful violent acts.

This year makes it impossible to keep up with this narrative because on this Independence March the far right was on the streets alone and it wreaked havoc.

This year, the anti-fascists decided to move their demonstration to November 9, the anniversary of Kristallnacht. The demonstration was attended by around five hundred people and was an entirely peaceful affair. On November 11, the Polish presidency organised a national day march separate from the far-right one, which gave a clear opportunity to any moderate nationalist who wanted to manifest peacefully to do so. And thousands did. Those left attending the Independence March this year were the pure far right.

Many observers of Polish society share a feeling that far-right attacks in the country have been growing, accompanied by a sense of impunity of the perpetrators. According to Nigdy Wiecej, a group monitoring racism in the country, between the start of 2011 and the middle of this year, over 600 hate crimes have been committed, and numbers are rising.

Over the past years, four people have been killed in hate crimes. Chechens, one of the largest migrant groups in Poland, are being attacked and harassed. The Polish far right often targets sexual minorities, feminists and leftists groups (“communists” are still the biggest “enemy” in Central and Eastern Europe).

Most of the Poles do not care that much, although for many of them sexual minorities or feminists are deviants. The most important opinion-makers in Poland are, after all, conservatives.

The second strongest political force, Kaczynski’s Peace and Justice, has a track record of being close to the far right. Between 2006 and 2007, it governed together with the League of Polish Families, which in its turn brought prominent figures of the far right to governmental posts.

The biggest party in Poland, Tusk’s Civic Platform, which is the political choice of most liberals in the country, is also leaning to the right. Over the past year, they have been close to tightening Poland’s already very strict anti-abortion law and they refuse to get behind the legalisation of civil partnerships for gay couples.

The Catholic Church, whose conservatism appears to have increased over the past years, continues to have a staggering grip on public life. Conservative and Catholic media are numerous and influential – Radio Maryja is an infamous example.

A credible strong left, which could promote more liberal social attitudes, is still absent in Poland. Leftist organisations and individuals who carry progressive messages are often dismissed as “communists”.

This is an environment in which the far right can breed.

Research conducted by Michal Bilewicz, a sociologist at Warsaw University, indicates that it is socio-economic factors more than anything that make people turn to racism and xenophobia. His research shows that since the 1990s peaks of anti-Semitism among the general population for instance were directly correlated with intense economic hardship.

While Poland is supposed to have weathered well the European economic crisis, many never had access to the fruits of post-1989 economic growth and employment conditions here are some of the most precarious in the EU.

One of the saddest things about the Independence March this year was the large proportion of youth among its ranks. The parade was made up of thousands of teenagers and young men with no better options for belonging and expressing their feelings than joining football hooligan groups and eventually far-right actions.

What they unfortunately do not realise is that what they have been trying to destroy during the Independence March this year is precisely the seed of a society in which their fate would be much better.

In the two squats attacked, free concerts and language courses are organised; there is a food cooperative which brings cheap food from a deposit in the north of the city; there is a non-monetary exchange system which allows getting goods and services without having to pay cash; and there is even an initiative to fight against the eviction of poor families. At the same time, the rainbow burnt down was a symbol of an imagined Poland where all kinds of people, no matter their sexuality, religion or economic status can live together and respect each other.

The governing Civic Platform has been of late taking rhetorical stances against hate crimes committed by the far-right. Yet action remains unsatisfactory. Despite the Polish constitution and penal code containing provisions that allow for prosecution of hate crimes and of organisations promoting national and racial hatred, this legislation is hardly ever used.

The anti-hate crime strategy of the Ministry of Interior is restricted to information campaigns and some police training.

It is unlikely that any of Poland’s current main parties are going to take up the issue of the socio-economic roots of racism and far-right growth, particularly since it is their own economic policies which caused inequality and unemployment to begin with.

The only hope is that the Poles would realise that nationalist rhetoric does not put bread on the table, nor does it create real socio-economic opportunities for the young generation.

Claudia Ciobanu is a freelance reporter based in Warsaw, contributing among others to Inter Press Service (ipsnews.net) and OpenDemocracy (opendemocracy.net). 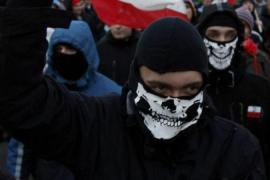 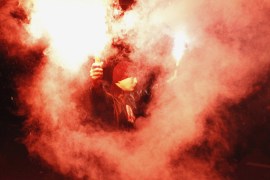 Riot police break up rival crowds of protesters in Warsaw as independence day holiday becomes a trigger for clashes. 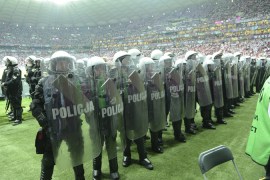