New Haven, CT – When it comes to President Barack Obama’s foreign policy, I’m of two minds. Killing Osama bin Laden? Thumbs up. Killing a US citizen who worked for al-Qaeda? Not so much. But at least he knows what’s going on. When Mitt Romney talks about foreign policy, I get this sinking feeling that he believes the number one geopolitical foe of the United States is the Soviet Union.

Wait, he said that, didn’t he? Well, he said “Russia”, but he meant “Soviet Union”, as the advice of his foreign policy advisers suggests. They also said Obama abandoned Czechoslovakia, which broke apart in 1993, but that’s not the point.

Collectivism is in the air in the United States, as it has been since John McCain called candidate Obama a socialist. Since 2008, I’m pretty sure I have heard more about communism than I did during the Reagan administration when the Soviet Union, though it was slouching toward obsolescence, was still a potent symbol of… something. By the time Mikhail Gorbachev became leader in 1985, his chief concern was winding down the Evil Empire.

Which brings me to this: Who is Romney talking to? When he says Russia is our number one foe, he has someone in mind. This all-American, as I imagine him, isn’t worried about Iran, North Korea or al-Qaeda. This guy believes in what he can see and hear, and clearly Obama’s a communist – he knows it’s true. And Russia, well, that’s a communist country. Is. Was. Whatever. Point is, any idiot can add two and two. If Obama’s a commie and if Russia’s a commie country, then Russia’s our number one foe.

But what about voters who don’t already hate the president? You must be a certain age to remember when the Soviets posed a true threat. When Nikita Khrushchev said the USSR would bury the US while banging his shoe on the lectern, that meant something. The greatest threat now comes from Slavic mockery. When he heard about being our “number one foe”, former president Dmitri Medvedev joked: “It is 2012, not the mid-1970s.”

The older you are, the more likely you are to remember Khrushchev (and Stalin’s Great Purge, Sputnik and the Cuban Missile Crisis) and the younger you are, the less likely you are to feel what older Americans feel when the word “communism” enters the conversation. This was the case with the New Left in the 1960s. It ran against the anti-communist grain of the Old Left of the 1950s, which was desperate to distinguish its democratic socialism from Stalin’s genocidal dictatorship.

Members of the New Left didn’t bother with that, because that was something their Old Left parents cared about. Something similar is happening today. A December survey by the Pew Research Center found that many young people in the US look at capitalism more sceptically than they do socialism. Same if you’re not white. Blacks like socialism. So do Hispanics. Not surprisingly, older whites disliked “socialism”. The oldest disliked it most.

I assume Romney is appealing to older white voters, but that theory assumes older white voters don’t know the USSR fell apart more than two decades ago. Of course, most do. So Romney is preaching to an elite group of voters – a choir already convinced that the president is a communist.

As in the past, Republicans and conservatives use “communism” as a wedge issue to distract us from what’s important, such as workers’ rights and economic injustice. The difference between the past and present, however, is obvious. There is no communist threat to the US. “Communism” can’t be a wedge anymore. Yet the more they apply the rhetoric of the past to the politics of present, the more they appear out-of-touch.

For instance, the conservative press described May Day as a “communist holiday”. The attempt was to discredit demands for economic fairness, an issue conservatives categorically oppose, because it contravenes their free-market ideology. Never mind that May Day is observed in free-market democracies such as Greece and Spain. Mentioning that kind of defeats the purpose.

This is not their only omission. They don’t mention May Day’s American roots. It comes from 1886 when a massive nationwide strikefor an eight-hour workday (10-12 or more hours were normal) sent shock waves across the country. Police massacred protesters. Four men were convicted and hanged. Even Karl Marx’s collaborator Friedrich Engels took note: “The American working class is moving … The appearance on the Americans upon the scene I consider one of the greatest events of the year.”

So if May Day is a “communist holiday”, as conservatives insist, it’s not because it came from Cuba. Rather, Americans fighting against Big Business inspired workers in other countries, some of which eventually became socialist. Over time, immigrants, some socialist and some not, reintroduced May Day to US workers and, in doing so, a geopolitical theme came full circle.

But Romney and the conservatives don’t want that. They want a country friendly to business and indifferent to workers. So they tell tall tales of threats inside and out – of the “incursions” of “the Soviet Union” into the arctic, and of a Manchurian president bent on turning the US into a dictatorship. Yet history is against them.

As memories of the Evil Empire fade, and as economic burdens at home grow increasingly heavier and unfair, Romney and the conservatives can tell stories for only so long. Eventually, if they want to stay relevant, they must leave the past behind. But first they have to face the truth – and I’m not sure they can.

John Stoehr is a lecturer in political science at Yale and a frequent contributor to the American Prospect, the New Statesman, Reuters Opinion and the New York Daily News. 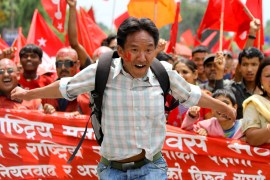 In pictures: May Day marches

Workers of the world unite on international labour day to call for better, fairer and safer employment conditions. 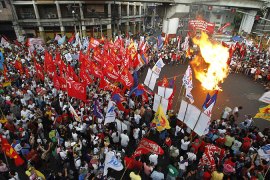 Workers around the world mark May Day

Tens of thousands of people take to the streets across the globe, protesting against job cuts and austerity measures. 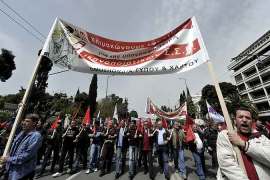 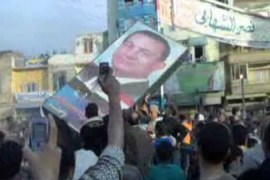 Mahalla at forefront of workers’ struggle

Opinion: Gun laws must be wide-ranging