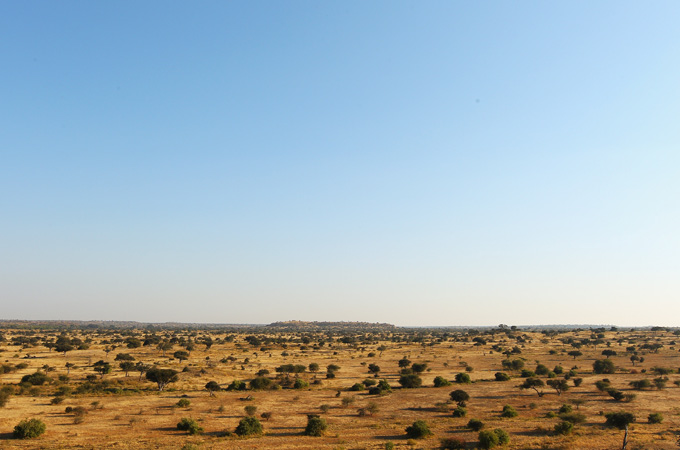 ‘It has been argued that it makes no sense for Botswana to try to produce more food. It’s a semi-arid country with limited water
resources and rainfall is becoming even more erratic because of climate change’ [GALLO/GETTY]

Gaborone, Botswana – You wouldn’t know there’s a food crisis in this country, one of Africa’s wealthiest and most stable countries, because it’s a silent one. This is not the doom and gloom Africa that we often hear sensationalised in the media as a place of coups, famines and corruption. No, Botswana is a model African state which has lived carefully within its means, had democratically elected governments since independence, and is the world’s leading exporter of precious diamonds. Yet food prices are up here dramatically since 2011, and the rural and urban poor are hurting badly. Unless policymakers rethink their strategies on agriculture and development, “growth with hunger” could be the rest of continent’s conundrum in 25 years time.

While the global economy struggles with its economic malaise, Africa’s resource rich economies continue to grow. In some regards, Botswana is a shining example of successful resource-financed development. It has carefully husbanded a valuable natural resource, diamonds, and invested the proceeds in infrastructure development and education. Botswana’s literacy rate of 86 per cent is one of the highest in the world, and its road and hospital infrastructure is admirable. Its government is ranked as one of the least corrupt by Transparency International, it exports high quality, grass-fed beef and its high-end eco-tourism business is booming.

Yet Botswana imports 90 per cent of its food, which has made it particularly vulnerable to rising global food prices. In 2011, global food prices were the highest on average at any time since they began to be systematically recorded in 1990. Following a slight decline, prices are now rising again and are higher than they were in 2008, when they resulted in a good deal of social unrest.

Despite consistent growth, the problem is that Botswana also has one of the most inequitable income distributions in the world, second only to Namibia. As such, while Botswana is a prosperous middle income country, the median per capita household income in the capital city, Gaborone, is only $2 per day. With two-thirds of the city’s population spending nearly half its income on food, rising food prices present a particular problem. Recent surveys suggest that 63 per cent of households in the capital are severely food insecure, and 21 per cent of households in rural areas sometimes go for a day without eating.

A new approach to development

Botswana’s problems could be those of the whole continent in the next 25 years if we stay on the current development trajectory. Botswana, while largely rural at independence in 1966, has been urbanising at a phenomenal rate and now has 60 per cent of its population residing in cities and towns. Although Botswana is ahead of its neighbours on this front, the continent as a whole is the most rapidly urbanising region in the world.

While Botswana has anaemic crop production (producing only ten per cent of its food), the poor are disproportionately dependent on this activity. Even the urban poor often depend on food shared with them by relatives in the rural areas.

It has been argued that it makes no sense for Botswana to try to produce more food. It’s a semi-arid country with limited water resources and rainfall is becoming even more erratic because of climate change. Its farmers can’t compete with large scale commercial agriculturalists in neighbouring South Africa, which supplies the majority of Botswana’s food. Farming is also under-remunerated because of the relatively strong Botswana currency due to diamond exports – which generally makes imports less expensive.

The economically rational thing for Botswana to do is simply exchange its revenues from diamonds, cattle and high-end ecotourism for food. And Botswana does have ample amounts of food, it’s just increasingly expensive. Therein lies the problem for this deeply unequal society. Climate change, the changing macroeconomic structure of the country and liberalised food markets are killing subsistence, dryland agriculture, the long time safety net of the poor. No amount of good governance and welfare payments to the poor can seem to solve the resulting hunger if the price of imported food continues to rise.

In many ways, Botswana’s present condition could be a foreshadowing of the continent in 25 years time, if the region assiduously follows the advice of development practitioners. This should be a rosy picture. Well run, corruption free governments that judiciously manage export-based economies emphasising commodities for which they have a comparative advantage (gold, diamonds, oil, natural gas, platinum). In those areas of the continent not overly affected by climate change, agriculture adopts the full suite of New Green Revolution technologies (hybrid seeds, pesticides, fertilisers and irrigation) and large commercial farms produce the majority of food for significant urban populations.

But here’s the rub. Resource-based economies are often undiversified and produce deep inequalities. Furthermore, high-input agriculture, while good at producing lots of food, is also heavily dependent on fossil fuel energy and only performed by wealthy farmers. As energy prices rise, so does the cost of food production. And the combination of expensive food and deepening inequality means that hunger will persist even if Africa’s leaders do everything “right”.

An Africa free from hunger requires a completely different approach to development. It means a move away from a productionist-based approach to agriculture (more is not always better), to thinking about farming as a livelihood that can sustain a segment of the population, provide fuller employment and buffer people from fluctuating global market conditions. African economies must also aggressively seek to diversify beyond resource exports. This will likely mean a return to some protectionism, and greater regional cooperation, so that new industries may be established. While diversity may be inefficient, it often produces more resilient economies that offer greater employment and a better distribution of wealth.

William G Moseley is a professor of geography at Macalester College in Saint Paul, MN, USA, and currently visiting scholar in the Department of Environmental Science at the University of Botswana, Gaborone.