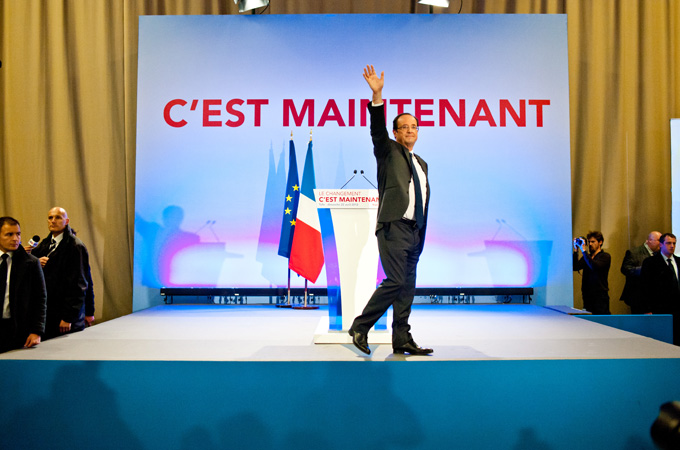 In order to get enough votes to win the election, Hollande must appeal to a very wide range of voters [GALLO/GETTY]

New Haven, CT – Assuming, as the polls project, that Francois Hollande is elected president of France on Sunday, he will face two monumental challenges. The first is to solve France’s overwhelming debt and fiscal crisis – in the eyes of many economists, the most serious in Europe. But secondly, in order to achieve this, he will be obliged to abandon many of the ideological mantras which have both fired and hobbled the French left for decades. This will be especially difficult, because so many of his electors actually believe those mantras.

Whereas the French right, while not bereft of ideology, has tended to embrace pragmatism, the French left, since the mid-19th century, has been driven by ideology. That ideology has generally been revolutionary in the sense that it aimed at root and branch transformation of the entire (capitalist) system in France. Such a project, in recent times, assumes that French capitalism can be dissociated from global capitalism and subjected to national constraints which will protect the French people from the outside world.

Even the Socialist Party (PS) of Francois Mitterrand in 1981 paid lip service to the notion of a “rupture” with the capitalist system. Few in the party believed this would actually happen, but it was necessary for the party’s self-identity as the leader of “the left” to perpetuate the revolutionary myth. In 1984, the “rupture with capitalism” was abandoned as the party engaged in a major turnaround on European macroeconomic policy. But the party never succeeded in devising a new legitimating discourse.

The problem for the PS during the 2007 presidential election was that nobody really knew how to translate the old ideological mantras into a winning electoral formula, still less how to devise a new politics. The party had no appropriate message for the world of the 21st century. Segolene Royal’s campaign promises steered clear of identification with an unreformed PS, but nevertheless amounted to little more than updated Keynesianism (a light touch on this state lever here to stimulate growth, and lots of measures to protect welfare and well-being).

It came nowhere close to addressing the fundamental challenges of early 21st century global capitalism. And it failed to impress more than a handful of those approximately 53 per cent of French voters who are now objectively on the right, but whose votes need to be secured if the left is to have any chance of winning.

Hollande has no more convincing a programme than Royale did five years ago. His standing in the polls reflects, above all, a visceral rejection of the outgoing president. Hollande’s “programme” panders to an instinctive populist rejection of austerity in favour of an obvious preference for growth. His polemical attacks on “finance” and “the banks” promise all sorts of regulations which will simply drive investors and companies to the City of London and will prevent the French financial sector from competing in world markets.

To wage war on the markets, or on rating agencies, is akin to objecting to the rotation of night and day. The severity and scale of the global financial crisis has left many European social democratic parties floundering. The “third way” policies of the late 1990s and early 2000s, which claimed to have found a new magic triangulation between states, markets and social welfare, simply collapsed at the first onset of a real economic crisis in 2008. In France, the problem is exacerbated by the resilience of the revolutionary tradition.

The combined pressures of globalisation, off-shoring and new technology make a mockery of the 19th century belief – still widely prevalent on the French left – that, as long as the party can capture the state and control the markets, everything can be fixed. This conception of the left, which excludes liberals and other centrists, captured no more than 41.7 per cent of the total vote in the first round of elections on April 22. Even if one adds in the score of the Green candidate, Eva Joly (a politically contentious addition), the left still only totalled 44 per cent of the electorate. This is the political reality in France.

For three decades, the French Socialist Party has witnessed the steady erosion of its working-class base. Votes cast in the first round tell a clear story. When Francois Mitterrand won the presidency in 1981 (the only time the left has taken the Elysee in the history of the Fifth Republic), the combined left had notched up 47 per cent on the first round. Mitterrand owed his victory to the “treachery” of Jacques Chirac, who refused to endorse the outgoing president Valéry Giscard d’Estaing. In 1988, when Mitterrand was re-elected, the combined left scored even less well on the first round: 45.3 per cent. It was decimated in 1995 (37.3 per cent) and again in 2002 (37.64 per cent). In 2007, the left’s first-round score was 34.87 per cent. The Socialist Party candidate alone has achieved scores around 25 per cent in every election since 1981.

Appealing to the fringe

This means that whoever that candidate is, he or she is obliged to go fishing for the remaining 25 per cent in order to prevail in the second round. The first port of call has to be all those on the extreme left, revolutionary votes which were cast for candidates who considered the official socialist candidate to be too moderate or too wishy-washy. In Hollande’s case, this means paying court to Jean-Luc Melenchon’s voters, knowing that this group is dreaming of a captured state being turned against the capitalist system. Thereafter, he still needs to make overtures to the liberal centre (Francois Bayrou), whose policies are diametrically opposed to those of Melenchon, and whose supporters will split their allegiance between Hollande and Sarkozy.

Assuming all these people vote for Hollande on May 6, he is still four or five percentage points short of the 50 per cent he needs to win. Therefore, he must rely on a substantial section of the far-right National Front voters supporting a socialist. This is a reasonable assumption, since many of them are disgruntled former communists from working-class roots who have swung from one extreme to another.

In other words, the socialist candidate in France, in order to be elected, has to appeal to the entire spread of extremist opinion, from far-left to far-right. No wonder the Socialist Party has failed to come up with a programme which reflects that political reality. Mingling with the crowds on May Day and witnessing the passion and conviction with which they still sing with full lungs “C’est la lutte finale… “

I sympathise with Hollande’s dilemma. But something has to be done to bring the Socialist Party into the 21st century. Hollande was very impressive in the face-to-face debate with Nicolas Sarkozy. He mastered all the statistics – indeed better than the president himself. But that does not amount to a policy.